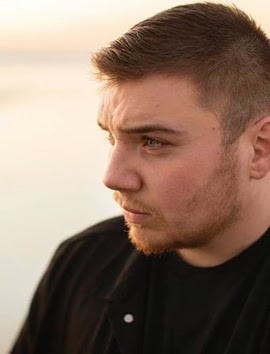 There aren't many holiday EPs that can preserve their shelf lives after the season, but that is what makes Whole Again by Front Porch Step a stunning four-track set. Only one of the tunes, I'll Be Home For Christmas, is a cover of the classic and brilliant original by Bing Crosby. It's a no-nonsense solid showcase of Jake McElfresh's vocal talent. He joins some cover greats.

Aside from the classic cover, it's the remaining three acoustic originals put out by McElfresh to kick off his first headline tour that are timeless. The emotive musician from Newark, Ohio, reinforces his ability to deliver impassioned lyrics accompanied by the twang of well-played punk acoustic.

Whole Again is a sharply written set of acoustic originals.

The EP opens with A Lovely Mess, an unapologetic admission of trying to be a better person for the one he loves. Like the title suggests, the lyrical imagery isn't idealistic. He sees neither himself nor her as perfect — just perfect for each other — to make their union a lovely mess.

The song does a solid job at capturing the sentiment without being sappy. It also tempers some of the helpless infatuation and devastating loss that made up much of the material in his debut album Aware. All in all, McElfresh is all about punk intensity with a classic singer-songwriter consideration.

In this one song, McElfresh also proves that he has much more material waiting in the wings. Sure, he might only know a little more than six chords, hate playing acoustic, and consider most of his music as poems put to a chord progression, but he also manages to be authentic when he sings about human frailty, missteps, and longing for something better.

The second track, Heaven Sent, underscores what he does best — matching a light acoustical melody with heart-wrenching lyrics. It's a breakup and regret it track with some teeth, made even more memorable with the addition of guest vocalist Ace Enders. The delivery between the two vocalists turns the track into a duet of understanding loss.

Whole Again is considerably stronger, starting off as another sorrowful tale about a relationship reaching a crescendo of completion. The sorrow on the front end is empathy over what the girl endured as someone who attempted suicide. But what makes the track truly stand out is the awareness that as much as he helped her through a difficult time, it was she who really helped him become whole.

At times, Front Porch Step feels like blues brought into a modern format, and there may be some basis to it behind the music. McElfresh was first introduced to blues and country by his father before his parents split. The separation took a toll on what he describes as an especially troubled childhood.

Eventually, he found straight edge as a means to find direction in his life. But where his wholeness truly seems to have taken hold is when his Island Of The Misfit Boy video introduced him to hundreds of kids who feel the same way and an equal amount of kicking him in the ass to say life isn't nearly as hard as they have it.

McElfresh clearly has some growth ahead to diversify his material and delivery, but that isn't the real point of his music. What makes him such a worthwhile listen is that you can hear that he truly loves life now even if he had to come through some hardship to do it.

The idea that he is still wants to write about where he came from, giving other wayward kids someone to relate to and perhaps find some hope for future, is admirable. But perhaps even better, McElfresh never thought for a moment that his record would sell. Pure Noise rightly felt otherwise.