Gang Of Youths Is An Emerging Artist 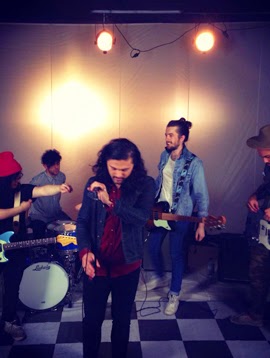 Expect to hear more from Gang Of Youths frontman David Leaupepe in the upcoming year. The talented singer/songwriter from down under is fresh off being named one of the best live music acts of the year out of Sydney and winning bronze in The Vanda & Young Songwriting Competition, which raises funds for Nordoff-Robbins Music Therapy Australia.

The song that gave Gang Of Youths the win is Poison Drum, one of several singles recently released stateside. Instrumentally, the track is underscored by punchy percussion and even-handed rhythm. But what makes it stand out is Leaupepe's raspy vocals, which give it a nostalgic concept rock feel.

The lyrics are smartly written for six-plus minute track that lends both hope and morbidity to standing on the front end of your entire life without having any money. It immediately resonates with a struggling middle class crowd, even if there is an irony in that Leaupepe doesn't relate to it like some of his listeners might.

While much of the inspiration has been siphoned out of his and his band's personal experiences (and perhaps influenced while they took in the hipster fringe of Nashville), the lyrical mysticism in the writing comes from a broad range of sources. The title, for example, was taken from a documentary on Chernobyl. It fits so well because it brings in his feelings of being disconnected and even alienated.

Gang of Youths drops Benevolence Riots into the mix.

The song was inspired by a girl he fell in love with when he was 18. She was very sick and forced to move back home to receive specialized care. While the song is surprisingly courageous, it ends abruptly, like many of those stories do. Not everything has a happy ending. Sometimes it's haunting.

Other tracks that make up the band's growing repertoire are the beautifully brooding Riverlands and the lesser known pop rock Evangelists that was released last year. The latter misses out on the grit that is quickly becoming an identifiable trait to the music that Leaupepe and company continue to work (and rework) again.

Case in point: Gang Of Youths originally relocated to the United States to record their debut album The Positions with producer Kevin McMahon (The Walkmen, Swans) before mixing with Peter Katis (The National, Frightened Rabbit). That was in 2013. The album will be released in March 2015, several months behind schedule, unless Leaupepe pulls it back again for yet another pass.

In sum, McMahon and Katis aren't the only ones with their fingerprints on the work. Aside from Jack Moffit (The Preatures) who produced The Evangelists and Poison Drum before the album work, Chris Collins (Tigertown) is also credited on Benevolence Riots. There may be more tweaks too.

And then there are a few unreleased tracks floating around too. Overpass is one of those rarities that is worth a listen. The raspy acoustic ballad makes for a compelling listen, even in its demo state. It wouldn't take much to transform it into a sing-along show closer with bandmates Joji Malani (guitar), Max Dunn (bass), Jung Kim (guitar, keyboards), and Samuel O'Donnell (drums), It won't be long before we see what, if anything, comes of it.

Take your pick between Poison Drum or Benevolence Riots. Either one is a promising introduction to to what ought to be a memorably addictive alternative album in March 2015. What makes it all the more compelling is that this band has only been together since 2012, which means most people thought of them as a scrappy inner-city band just a few short months ago. No one thinks so anymore.

Benevolence Riots, Poison Drum, and Evangelists are all up on iTunes. Riverlands is also available, but only as a video. You can also find the band on Facebook. Follow them if you can get past the ALL CAP madness. The band will begin an Australian tour in January. We'll cover the album too.