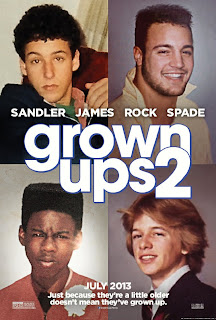 Nearly two years ago, I reviewed Jack & Jill and my assessment was basically, "If you're an Adam Sandler fan, you'll like this movie. I'm not."

Like every other Sandler movie I've ever seen, this one had some very, very funny moments.  At one point, my daughter and I were laughing so hard that a couple of pre-adolescent boys in the row in front of us abandoned the movie altogether to watch us. Sandler is a funny guy. Kevin James is a funny guy.  David Spade is a funny guy. Chris Rock...well, you get the point. And, of course, Salma Hayek is the most beautiful woman in the world (with the possible exception of Jane Krakowski).

But--also like every other Sandler movie I've ever seen--this one had far too much vomit. And, just in case the vomit and the repetitive gags weren't enough, Sandler brought in an elk or a moose or some such thing to urinate in the faces of at least two characters.  I gathered from the response around me that this was hilarious, but it just looked gross to me.

So, I'm once again going with what I expect will be my assessment of every Adam Sandler movie I ever see. Yes, it was funny.  Yes, it had moments that definitely made it worth seeing.  Yes, it was targeted toward 12-year-old boys.  And yes, it was gross enough that at moments I was sorry I'd showed up. I'm guessing, since the movie led the weekend box office, that there are plenty of viewers out there who don't see things my way.