Handbags that Help to Rebuild a Nation 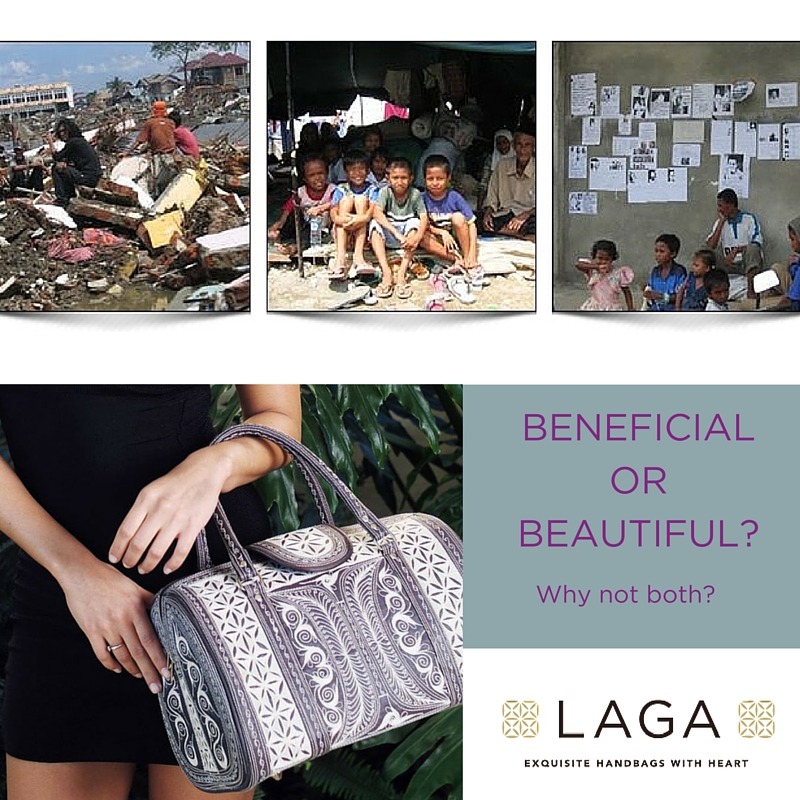 From fire comes the phoenix. In other words, beautiful things can truly come as a result of disaster. Although some areas devastated by the 2004 Indian Ocean Tsunami are still in the process of recovery, there are reasons to be hopeful for the people in the region. Because of organizations like Laga Handbags, residents of these areas are given a new lease on life, with economic freedom and the ability to determine their own futures

The Shock that Rocked the World Economy

On the day after Christmas in 2004, people living in Sumatra, Indonesia woke to a disastrous 9.1 earthquake. The earthquake triggered a tsunami of epic proportions that left little but devastation in its wake. Hundreds of thousands of people lost their lives in the days after, while over half a million people in Indonesia alone were displaced. The destruction put the entire region into chaos, as people scrambled to protect the vulnerable, combat the disease that often spreads after disaster, and help residents to rebuild their lives.

It is in this light that Laga Handbags was born. Roy van Broekhuizen, a day trader of Indonesian descent, was asked to help head a tsunami relief effort. What he saw when he arrived spurred him to action. He returned to his home in Santa Ana, California, with his suitcases full of goods he could sell to help provide financial support to the people struggling to return to a sense of normalcy. On his third trip, his wife Louise accompanied him to assist in the relief effort. As she walked the streets of Aceh, Sumatra, Louise spotted an incredible opportunity in the lovely, hand-stitched handbags made by local women. Roy and Louise realized that giving local families a viable means to make an income could help them establish new lives better than simply giving them money. They arrived in California and quickly sold the handbags Louise had purchased. With the money, they were able to rent a small workshop and hire 12 women to make the handbags. Over the years, this enterprise has spread to several villages, constructing a cheerful future where once there was only desolation.

The word “laga” means “beautiful” in Acehnese. It is true, these handbags are certainly a delight. Meant to compete with designer bags bearing the name of Prada, Gucci and more, Laga handbags bear something special. Each bag is one-of-a-kind in that it was hand-crafted by a woman whose skill in sewing and embroidery dates to her ancestors from many past generations. The purses are undeniably chic, featuring a variety of colors and styles that are designed to match any customer’s discriminating tastes. Yet, the bags, ranging from handbags and travel gear to wallets and accessories, often cost a small fraction of the price of many designer bags. Laga Handbags was featured on the Oprah Winfrey Show in 2010, as an excellent example of a unique purchase or gift that gives back to the community that generated it. Many shoppers prefer to know that the items they purchase have a story with true heart. Laga Handbags meets this criterion, with exquisite handbags that are designed and built with the heart and soul of the women of Aceh. Explore the world of style and beauty expressed by these handbags.