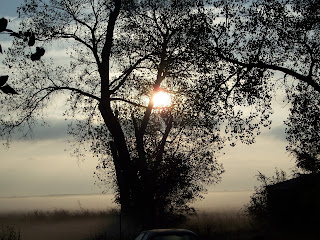 4 Ezra 15:38 “And then shall there come great storms from the south, and from the north, and another part from the west.”
Haunting Christmas Storm

I don’t know where you’re located but on Christmas day we here in the Midwest had the weirdest and darkest of storms almost wipe us out.

Let me start by saying I had the most beautiful blessed day! I woke in the ever peacefulness of the morning, computer humming in the background, hubby already awake. I shuffled to the kitchen to start my morning coffee and allowed Sassy to go outside and do her morning business.

Besides the wind smacking me in the face the fog wouldn’t allow my eyes to see any further than the road, so I ducked back in the house to see how the coffee was coming along, ahh, nothing like a house filled with the aroma of coffee!

We waited for Adam to make his presence known and then the excitement of gift exchange began. My favorite gift was a Grace VanderWaal CD! My second (or third) favorite gift was a Minion that TALKS! Says 25 different phrases and well, this excited me like any child ripping open presents on Christmas morn. Shut up! I hear you laughing, I was excited!

They asked what I wanted and I really am not a person of want so anything was fine by me, but I think these people I live with know me too well and made their purchases of love with the knowledge of knowing and understanding my needs. Yes, I needed that Minion to bring a much-needed smile to my face!

The Grace tape brought tears to my eyes because I didn’t think anyone would remember how much I admire this twelve-year-old prodigy! But hubby remembered! Then there were the adult coloring books! You know coloring books for grown-ups that kids would find boring but I’m using them to keep my fingers exercised; kind of a physical therapy on myself.

I got Pepsi cups, a Pepsi apron (that covers my chest for when I’m slaving over the hot stove!) now I don’t ruin my shirt by that one splatter of sauce. And what else you ask? Well two letters, HP? Any guesses? A new and improved much-needed laptop. WOOHOO!! My old one has been going up for months now and his days were numbered as my days were just writing and going easy on the tired fella. Watching videos was like riding down the bumpy road in frustration waiting for the trip to end. No amount of cleaning was making the old fella work any better and hubby knew that and made sure my Christmas was a MERRY one!

I didn’t get to play with my toys because out here in the Midwestern part of the country, people eat dinner at noonish. Yes, noonish! I was kind of leery after looking into the deep thick fog that made viewing the outside world nearly impossible. It was if God had hung a veiled curtain over the window and was not allowing anyone to see pass the flowing mist.

Anxiously, we went on with our plans and all hopped in the truck and trudged on, falsely thinking that it could only get better out there right? Boy were we ever wrong. The dirt road was already a trembling puddle as the winds were causing the water to shiver as we drove. The drizzle became a downpour quickly as we hit the blacktop part of the road but the fog and rain were only getting worse. I wanted to go back! Home! Safety!

We pressed on seeing it brighter up ahead but as we lurched ever so slowly as a slug on a slimy road, eerily the sky darkened to almost black as night. The fog had turned into a thick blanket then the rain, the torrential downpour coupled with what felt like a hundred mile an hour winds basically pushing the car off of the road to the side where a ditch was only the next place to go.

Lightning crashed thunder erupted, and winds pushed. I saw a car pull over and he just sat there waiting for the monsoon-like winds and rain to stop pulsating so that we could eek along on a nearly empty road barely missing hydroplaning our way into a ditch. I felt as if I was in the Twilight Zone special feature and I would surely wake up and all would be sunny and bright after passing through the time warp vortex.

I wanted to turn around and go back home but I wasn’t the one driving and after all, we had made it this far. I must’ve said ten Our Father’s before reaching his brother's place and yes, we were the first to arrive as the rest of the family was facing the same exact thing that we had just been through.

All of the family arrived safely, each with their own version of what they had just experienced driving through but like I said we all made it safely to the Family Celebration. Although worries of the turkey not making it, fear of food poisoning hung over the get-together, quickly gone after eating all of the extremely good food that survived. The turkey was fine really but the caution was there for us to decide after the oven had failed early in the morning hours, rendering Tom drying out time in a cooling oven.

The day was drawing to a close. I was getting antsy wanting to play with my new toy at home and briefly the sun shone and pierced the darkened skies just as the Light of the Lord will do for any soul living in the dark. All three of us were ready to part before another predicted storm hit.

The only thing that hampered the drive home was the winds that had calmed to about 50 mph but we made it home, listened to the howling wind hurl small limbs at the house, shred shingles from the rooftop and pound on the walls like an anxious intruder. Outside tables and chairs were flipped upside down, chimes broke free from the branches where they hung, but we all made it through yet another Christmas day.

Except for the weird wind, strange fog, and thundering lightning the day was perfect. Yet another Pop Singer (one of my faves) died and 2016 will stand out as the most Perfectly Imperfect year to date, for ME!!!! Fittingly, Perfectly Imperfect is Grace VanderWaal’s CD’s name!

Now onto the days AFTER Christmas…