Heirlooms and other family news

An heirloom is an article or object that has been in a family for several generations. Most objects that might become heirlooms don’t, because they are broken, thrown away, stolen or destroyed or lost (by fire, flood, earthquake etc). So in the end, only a few may survive to be passed on from one generation to another. 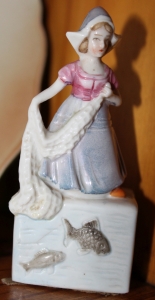 Those that do survive, however, often have stories attached to them, and the stories are often forgotten, so we’re recording the story of one such heirloom — a measuring tape in the shape of a china fisherwoman. It was made in Germany, and belonged to Auntie Belle.

Auntie Belle was Val’s great aunt, Isabella Carr Ellwood (1873-1958), who was Matron in a hospital in Whitehaven, Cumberland, England. She was married to Jim Hurst, and they had no children. Val’s grandmother, Mattie Pearson (née Ellwood), who was living in a granny flat with Val’s parents in Escombe, Natal, travelled to the UK about the time that Auntie Belle died, and brought back the measuring tape, and gave it to Val, who was then about 9 years old.

Mattie Pearson wrote regularly to her brothers and sisters in England, and especially to her younger sister Maggie, who was married to Ernest Pearson, Mattie’s late husbands brother, which made him a double brother-in-law. The family tried in vain to persuade Mattie to make the journey home to England to see her brothers and sisters. When Mattie’s daughter (Val’s Auntie Mollie) was ill with jaundice, Mattie stayed with them to look after the children. When Mollie recovered, the family primed the family doctor, Doctor Rosenthal (who was well-known and well-loved in Escombe and vicinity) to tell Mattie that she needed a rest, and that a trip to England to see her family there would do her good. What Dr Rosenthal suggested was tantamount to a command.

Mattie Pearson and her sisters when she visited the UK in 1939, just before WW2. Mattie is on the front right. Behind her at the back right is Maggie. Bessie was at the top left. We think the other two are Belle and Lizzie — can anyone identify them?

So Mattie booked a trip on the Southern Cross, a three-week relaxing voyage in company with her old friend Mrs Mitchell who had been glad to join her on her trip, and saw her brothers and sisters. Auntie Belle died either while she was there, or shortly before, and so she brought the fisherwoman measuring tape back for Val.

Mattie Pearson (on the left) at dinner on the ship, with her friend Mrs Mitchell on the right.

The time for such sea voyages has passed; air travel is quicker and cheaper, but far less relaxing, and if you want to go by sea, for the most part you can only take cruises to nowhere. The days of passenger ships was dying by the early 1970s.  The ship that took Mattie and Mrs Mitchell to England was the Southern Cross.  When Val and her sister Elaine travelled to England in 1971 they went on the very last voyage of the Arawa and came back in September on the very last trip of the Southern Cross. 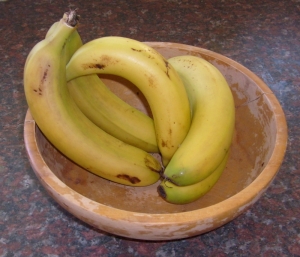 Now here’s another family artefact that will never become an heirloom because we’ve already eaten it. Our son Simon saw a food programme on TV where the presenter said that food should be artistically presented, so Simon made this artistic arrangement of bananas in the fruit bowl. But the photo might last a bit longer than the bananas.

Mention of the Ellwood family, and the fact that Mattie Pearson kept in touch with her siblings by letter for almost 60 years reminds me of changing patterns of communication. When our daughter Bridget went to Greece 20 years ago, we kept in touch by snail mail, writing almost every week. When Bridget got e-mail, it should have been easier to communicate, but it actually wasn’t. E-mail messages were much less frequent and much less informative. Now there is Facebook, but Facebook, though it allows one to share photos, lends itself to textbites rather like soundbites. You see a photo of a place and realise that whoever posted it might have visited it, but there is little description of the when, where and how, or who they were with, or what they did there.

For the last 3 weeks our internet connection has been faulty. I’ve been able to download e-mail (after 5-20 attempts), but the replies are all queued, waiting to be sent when the line is repaired (for more on this problem and the reasons for it, see Incommunicado). But in these 3 weeks there have been almost no personal messages from friends or family. There was one very welcome message from a cousin whose existence I was quite unaware of — Roxanne Williamson, née Dryden — and I’ll reply to that more fully when our internet service has been restored (if you are reading this, then it will have been restored). But apart from that all the genuine mail has been in two mailing lists, one from the Orthodox Peace Fellowship, and the other the Legacy User Group – a support service for a genealogy program I use. Two-thirds of the mail that we have downloaded with such difficulty is spam — things like discount offers from shops I’ve never heard of (which country is “Macy’s” in? Or “Everest Windows” or “Takahashi?).

But that’s what the state our communication has been reduced to, in spite of, or perhaps because of, all the marvellous technological aids. I can receive and send email without moving my bum from this chair, whereas to send a snail-mail letter I have to go 2,6 kilometres to the nearest post box, a 40-minute walk one way. Yet Mattie Pearson managed to write to her sister Maggie once a week, and at less frequent intervals to her other siblings, and her letters were probably far more informative.

When we first started doing family history just after we were married back in 1974 we tried to re-establish contact with those relatives, and Maggie’s daughter-in-law, Nora Pearson, wrote to us by snail mail once a month or so, long chatty letters telling about her children (Val’s double second cousins) and grandchildren, what was going on in the town, and in their church (she and her husband John had just joined St Begh’s Roman Catholic Church). Now we are “friends” with her children on Facebook, but Facebook censors the communication so we only see about 10% of what they post 10% of the time, and in spite of the wonders of modern technology, we are less in touch with that side of the family than we were by snail mail 40 years ago.