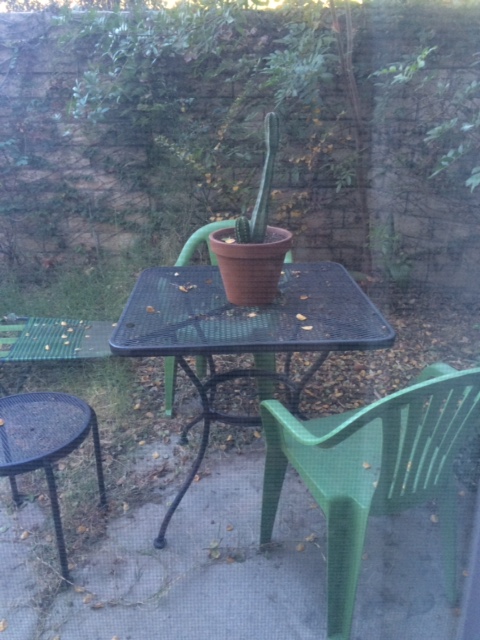 I'm on a Facebook and Instagram hiatus for the month of December. This is something I did last year and I found myself really liking the break from the influx that is social networking. I recognize blogging can be seen as a form of social networking but there isn't that influx of information coming at you at lightning speed. It takes time to actually sit there and read a blog. There's a certain pause that comes with commenting on a post. It's not just a quick "Like" which really doesn't say much of anything except give us instant gratification.

For some reason, I've found myself wanted to "unplug" more often. I've been longing to open up a new book (or an old one I've yet to finish) on the patio. As you can see in the photo above, we need to do some serious raking however, I must say, my cactus is growing rather nicely. There's even a little one making it's way through the pot.

With "unplugging" comes spending time with Brian, family and friends. We have some changes coming later next year which I am not ready to divulge on this platform yet so this holiday season will be celebrated to the utmost.

Our new favorite game is Reverse Charades. It is soooo fun and freakin hilarious. I cannot wait to play it again. Instead of one person acting out a clue silently, one person guesses while the other players act out the clue. When you're the one guessing, you have no idea who to watch.

We're going to make the effort to go ice skating this year. We wanted to go last year but got sick the night of Christmas, ugh. I haven't gone in years and wasn't very good at it. I don't care though, I'll be that one laughing loudly along the rails making slow circles and trying to get up the courage to skate a couple of feet without touching anything. Of course, Brian will be the pro since he played hockey growing up. It'll be neat to see him skate and trying to get me off the rails!

I'm not sure if I'll write another post before the new year so in case I don't - I hope all of you have a beautiful holiday season and a memorable New Year. 2016 Baby!