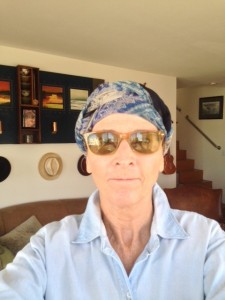 No one will ever confuse cancer with a trip to Disneyland, but it’s important not to let the chemo drip rain on your parade. For the most part, people going through treatment are making the best of a bad situation because cancer patients realize that we need help. So we high five each other after pounding another chemo bag…and we scour the ward for humor… which tends to retreat when you are hooked up intravenously for seven hours. But, there are perks. Somewhere in one of those hanging bags is a whole lot of Benadryl, which affects me like an elephant tranquilizer. The minute it seeps in, I’m slurring the Gilligan’s Island theme song. Maybe it’s the fact the nurse referred to it as, “A three-hour bag,” which sounded so damn close to “A three-hour tour”…that I busted into song. I even mimicked the lightening bolt crash…it was bloody brilliant if you ask me. I didn’t know at the time I was under the influence of Benadryl…or that it would turn me into a helium balloon in an F4 updraft. My daughter finally convinced me to drop the song down an octave or two, and pace myself. There were hours remaining and the chemo wing was losing interest in Gilligan’s shipwreck.

Treatments are every three weeks. Now that I’ve completed a couple, I see a pattern. The first few days of post-chemo are fine, but around day three my bones ache. This phase lasts about four or five days. Netflix and naps are wonderful distractions. I doze like a lush after a bender, and when my eyes open, I channel surf. The white blood cell count is at it’s lowest during the second week, so I make sure to take good care of myself by hand washing compulsively, and avoiding anyone feverish. I also try not to bump into things, like this morning’s collision with a coffee table, because even the smallest of cuts threaten to bleed me dry. By week three I’m back purring like a fine-tuned ’57 Chevy….and then it starts all over again.

I know it’s important to eat right so I’m doing my best to stay away from coffee, sugar, alcohol, white flour, processed food, red meat, sushi, and Snickers. This leaves beets, green plants, nuts, hummus, and tree bark as my “go to” meals. Hold me back! Seriously, the only thing I am craving right now is a ripping cup of coffee with an add shot, a decadent chocolate bar, and a glass of red wine…not in that order. I fear if my common sense takes a hiatus I will channel Cameron Diaz in The Holiday, cracking open a bottle of cheap wine in the supermarket and drinking as she fills her cart with snack food. But then I remember sustaining myself on copious amounts of CHEEZE-ITS and wine for way too long and that’s probably one of the reasons I’m in this mess…so I recoil…and eat a bag of kale.

I take my blanket, a warm pair of socks, and a good book to chemo. It was rather unsettling upon realizing I was the only one there who was bald. I thought everyone lost their hair unless they used that expensive freeze-dry wrap that saves the follicles. So I asked one of the nurses and she told me I was on a heavier dose that can in some cases speed up the balding process. Lucky me. It also speeds up brain fog. I have noticed that I’m not quite clipping it off. I hope my brain, stem and all, decides to make a guest appearance in the months ahead. Only time will tell. On a more uplifting note, I’ve heard that some things are better left forgotten…and when I remember what those are, I’ll write a post.