The Hortus Deliciarum of Herrad of Landsberg 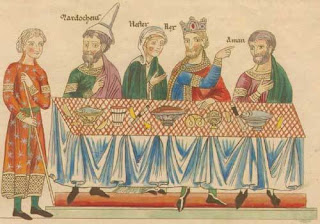 An illuminated encyclopedia that dates back to the 12th century, the tome, the title of which is Latin for “Garden of Delights,” covered a wide range of topics, from a retelling of the Biblical history of the world to the scientific interests of the day. Meant to serve as a primer for young nuns and abbesses entering the service of the Hohenburg Abbey, a convent perched atop an Alsatian peak, much of the knowledge and writing contained in the text was reprinted from preexisting religious and philosophical manuscripts.

However, the author/compiler of the Hortus Deliciarum, an abbess named Herrad of Landsberg, added much more to the text. Herrad joined the convent in her youth, coming from a wealthy royal family. Hohenburg Abbey was a well-funded and respected convent that had the blessing (both spiritual and financial) of the Holy Roman Emperor Frederick Barbarossa I, allowing the education of its nuns to flourish. Herrad likely received the best possible education a woman of her time could have received, learning about music, sciences, theology, and the arts.

The Hortus Deliciarum is probably best remembered by its vivid illustrations. The 300-plus images cover subjects ranging from historical vignettes to religious scenes including one particularly striking vision of a fiery hellscape. (Sorry, sinners.) While Herrad is thought to have directed the creation of the illustrations in the text, which were rich in telling detail, “The artists of the Hortus Deliciarum, likely the canonesses living at Hohenbourg in the late 12th century,” says Joyner, “gave a great deal of attention to details like luxurious clothing, the plow and a mill, and apparently the pretzel!”

Read rest of article at the Atlas Obscura