Dozens of companies have stepped up efforts to provide relief to Haiti after the catastrophic damage cause by the 7.3 earthquake on Tuesday, Jan. 12.

"The earthquake that hit Haiti last week has devastated the lives of hundreds of thousands of people in Port-au-Prince and beyond," said Kevin Sharer, chairman and chief executive officer of Amgen. "The contributions are expressions of our sincere sympathy for those directly affected by this tragedy." 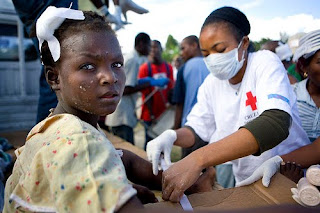 AT&T and Verizon Wireless both made donations. Their efforts were unique in that by partnering with Mgive, it allowed wireless users to donate cash directly to the American Red Cross.

Some other unique displays of support came from BloggersUnite.org, which rallied members to raise funds, and American Psychology Association, which expanded its donations to include mental health services to the survivors and to the families of victims.

"The sheer number of lost lives, the wounded and the destruction of homes and communities as a result of the earthquake is tragic," said Carol Goodheart, Ed.D., president of American Psychology Association. "This is also a difficult time for those who are witnessing from a distance the loss of friends and family and the destruction of land in their native country."

Giving during a time of immediate need demonstrates the human spirit behind organizations, reminding people that these organizations are made up with people who have the courage, strength, and fortitude to make a difference. While it always a good idea to respond effectively, sustained support, especially monetary contributions while supply chains are established, are welcome.