Hundred Visions Riffs Off Some Spite 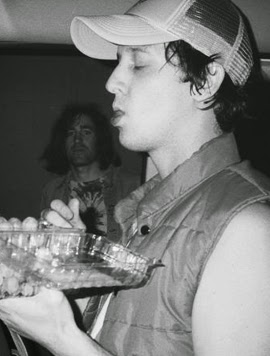 After coming together in Austin around 2010 and putting out the seldom heard but critically appreciated LP Permanent Basement in 2012, Hundred Visions has been busy. In between a heavy touring schedule, the band took time out to lay down a sophomore LP with Pau Wau Records.

Spite isn't necessarily going to blow too many people away but it does put garage rock back on the radar, thanks in part to Ben Maddox's ability to infuse punk-laced vocals into the mix. It's his nervous energy and angst that sets the pace for much of the riff-ready album. And it's only when he deviates by dialing down his vocals that the tracks drift into the background.

It's this distinction that distances three of the bandmates from their earliest beginnings as three teenagers who went to film school and started a cover band to pay a sometimes sarcastic tribute to David Bowie, Blue Oyster Cult, and Van Halen (among others). It wasn't until much later when the trio became serious enough to spin together original compositions.

Some of those tracks put out under the name Corto Maltese were solid, but it also seemed clear the band felt surprisingly limited by what they had wrought. So after the three — Maddox, Eric Loftis (drums) and Wes Turner (bass) — took off for Austin, it became apparent they needed a new name, more distortion, and bigger hooks with a second guitar played by Johnny Krueger.

It's evident from the first track that the band has never been more comfortable with the direction. Too Late To Live invites listeners to ease into the album with a mid-tempo psychedelic rocker with proto-punk influences. It's deliciously rich before the band cuts into the second track.

Our Ritual expands the repertoire toward dance-punk with the only psychedelic leanings dragged out by some dizzying guitar riffs that act as a second chorus. While still far away from a sing-along , it's still clear the arrangement comes out of their touring experiences. Our Ritual screams for a live show.

Thanks For Nothing shoots from the hip with big distortion, forceful sneers, and monstrous rhythmic beats that lay a great foundation for the guitar work to ride along the highs and lows. Any psychedelic bent is tame in this track, especially amidst the bass and drum work.

After this amazingly strong start, Spite slips just a bit with You're Going To Cut Me Loose. Don't get me wrong. It makes for a great backyard bouncer and is making the rounds with college stations. It's just that compared to the openers, this track and the much more mellow Blood On The Moon feels almost too familiar, like a band churning out a couple of tunes as they go through the motions.

If not for the drums and lyrics, it would be easy to the say the same thing about Embalmer's Apprentice. Likewise, Where Do You Want It and Dig Your Own Tomb will make for some great live show moments, but don't ascend to the wildly creative and unexpected power pop number I'm Inoculated or the frenzied and fiery Idiot Snow that will wind you rather than let you ease out of the album.

Anyone who has an affinity for garage rock will feel right at home with Spite by Hundred Visions, even if sometimes that comfort is found in something familiar rather than something wickedly distinct. Still, better than half the album by Hundred Visions is a cut above the average, making it a very playable sophomore album that makes for an even better touring set list.

Hundred Visions is clearly a welcome addition to the growing number of up-and-coming bands in and around Austin. You can pick up Spite by Hundred Visions from iTunes or find Spite on Amazon. Pau Wau Records is an indie label out of Austin. Hundred Visions can be found on Facebook.