You know, being on Squidoo, we lensmasters GOT to participate in a bit of a social experiment. Oh, I’ve tried my own type of social experiment and sometimes it works and then sometimes it doesn’t work. It’s OK to admit that you made a mistake about something and then pick up your chips and move on. And, the important part of that social experiment is to hope AND sometimes PRAY that the others are professional enough to understand … and let it go! 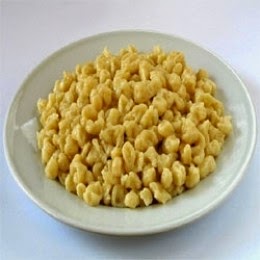 So, I had an idea, long ago and far away, about doing a Hungarian Spaetzle Case Study lens to track a lens’s performance. In the beginning, I was more proactive with the lens promotion. However, life intervened and I took a backseat to the normal type of promotion. After awhile, one hopes for normalcy and for fairness and for a return to the good old days when things were simpler and articles rose because they were good and got normal traffic that was also good.

I don’t cater to asking every tom dick and harry for a Squid Angel blessing. If YOU think my lens deserves that blessing, well go ahead and bless it! Personally, I think this is a pretty swell lens.

Size matters folks — and it’s NOT just in little dumplings aka Hungarian Spaetzle! Thanks for dropping by … I hope I can fulfill your needs today. 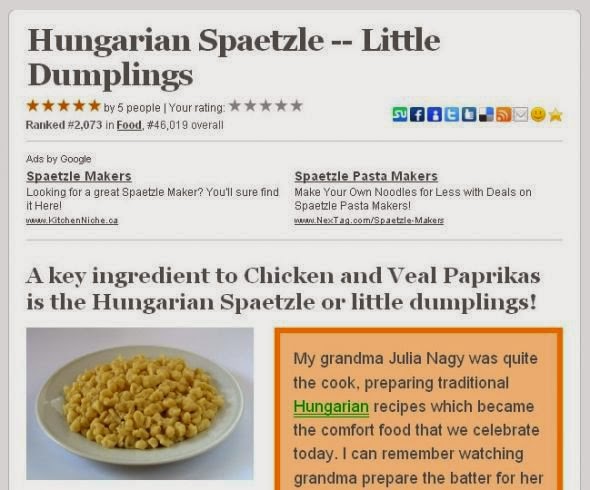 Of course, we all know the IMPACT of Squid Angels in that lensrank — so if a group of angels were to bless a lens, that could definitely skew the rankings. At this time, It is not believed that this lens HAS had many of those angel blessings. So the lensrank achieved for this “case study” lens should be truer to the lens promotion that has been used for Hungarian Spaetzle — Little Dumplings. Nowadays, with all the groups supporting group members, it is difficult to get many lensmasters’ ratings for non-group lensmasters. I don’t currently belong in any “groups” aside from Seth Godin’s original Tribes project. So, getting visitors to rate lenses demands more creative lens promotion!

Hungarian Spaetzle - Lensrolled
This lens was lensrolled on 8/31/09. These is a rather 'heavy' number of lenses for a typical lensroll. 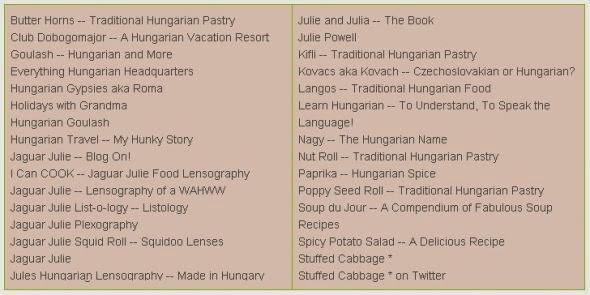 After lensrolling, throughout the day, this lens was added to social media platforms, first through the lens buttons to StumbleUpon, Facebook, MySpace, Twitter, Digg, Delicious. It was added later in the day to Stumpedia, RedGage, Tagfoot, and ThisNext. A blog post was done on JaguarJulie Blog On and On along with a Posterous blog entry.

Here are the Lensmaster Private Dashboard Stats as showing 24 hours after lens publication.

Squidirectory – A categorized Squidoo directory featuring an interesting variety of different subjects ranging from arts and literature, shopping, and eco friendly tips, to vehicles for sale, travel, and everything in between.

Hungarian Spaetzle - Lens Traffic - 90 Day Review
Taking a look back at the lens statistics for 3 months as of 12/20/09. 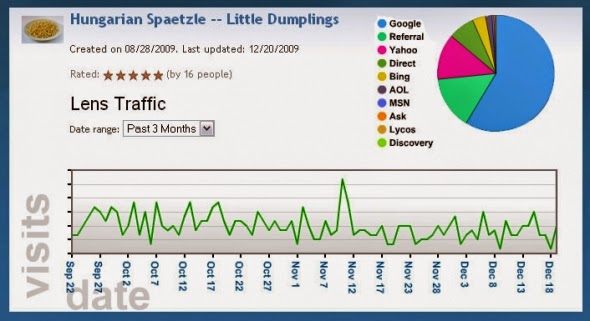 First of all! This is a very important statistic to note in the “case study” with regards to my previous comment about groups! See the previous module that reported “Lensrank Chronology” of:

Compare that bit of information with this lensrank AND ratings:

Does this NOT speak volumes that this non-group lensmaster’s lens has ONLY been able to garner 3 ratings in a 3.5 month time period? That equates to one vote per month! Heck, I’ve visited brand new Rocketmom’s lenses with some 19-20 votes right out of the gate! And, I’ve visited many of the other private/semi-private groups members lenses to see equally high number of lenses’ ratings — far more than the 16 ratings on a nearly 4-month old lens.

Google is responsible for bring the majority of traffic to Hungarian Spaetzle!

I’ve written much in my lensmaking experience about the power of Google and how it equates to the power of Squidoo in lens traffic. The cool pie charts that you can find on your lensmaster dashboard can give you a good idea of the health of your lens promotion.

According to the 90 day review of 12/20/09, Google is responsible for bringing in 59% of the traffic to Hungarian Spaetzle - Little Dumplings. That 59% is not a “little dumpling” in the composite of the “case study” of this lens. The other 41% of traffic is attributed to Referral, Yahoo, Direct, Bing, AOL, MSN, Ask, and Lycos. Discovery accounts for 0%. We all know that it is important to not “put all your eggs in one basket” if you are relying on a steady traffic stream to a performing Squidoo lens.

Are you a Spaetzle Lover?
Hungarian or Otherwise? Do you love LITTLE dumplings i.e. Hungarian Spaetzle? My grandmother made the best “Hungarian” Spaetzle ... little dumplings!