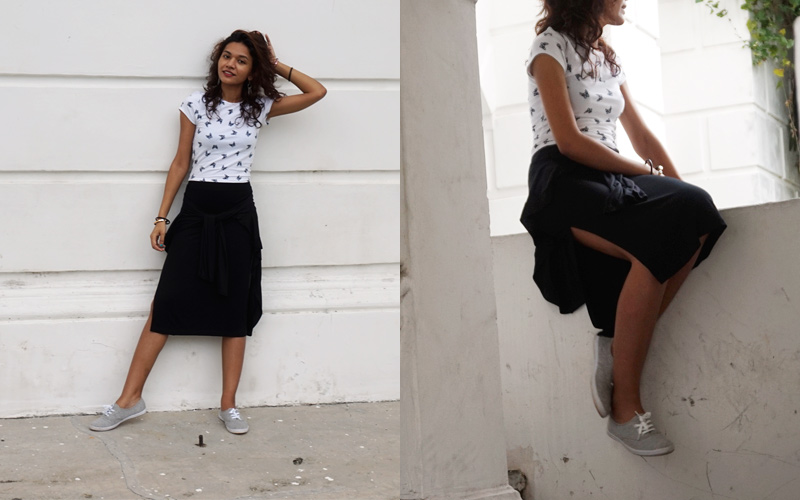 Another post of me haunting this old abandoned library which you’ve seen as a backdrop in a post before, but only this time, I explored other sides of the old architecture.

It was a day when the sun beamed at you as opposed to slowly barbecuing you to perfection, so I found myself with an itch and together with my adventure-ready photographer who actually chose this venue instead of what I had suggested, we gave the old library a visit!

The day was breezy and I was buzzing. I visually devoured cracks and random broken parts on the wall, ceiling, window and rooftop. Although the place was gradually enveloped by entropy, I felt life coursing through that made its presence known through wild shrubbery and fruit-laden trees that came to call the edges of the old concrete their home.

An old man taking care of the government office next to it saw us taking pictures and for a while before I noticed him there, I jumped and hopped about. I think we’ve all done this as kids but slowly, as adults, we tame our carefree instincts. Since I was high with dopamine from all the twirling and jumping, I found myself wanting to climb up the side stairway but something about my mother’s facial expression stopped me. She mentioned so casually about the roof falling ever so gently barely grazing my nose and so I spared her the energy from telling me more.

No exploration on the upper floor, this time. There is a disarray that is beautiful to witness in buildings slowly ravaged by nature that puts me in a quiet meditation. Looking at what is rather than what could or might have been. Staying present in the moment by breathing a little deeply, letting sounds, sights and scents pull me back in the Now, is one of the easiest methods to delve into one’s own being whilst outdoors. I was surprised at my mother’s enthusiasm knowing that previously when we came here she wasn’t that thrilled. I enjoyed the random breeze that gave us some reprieve from Malaysia’s infamous humidity.

I stood by trees, as per usual, with special attention to those that grew rebelliously by the building’s perimeter. Some trees had fruits with ants having a feast on them, so I made sure not to touch them. I ogled broad wild leaves, some heart-shaped ones and so wanted to open one of the backdoors, but as I touched the metal chain that kept the door secure, I felt a jolt of fear. Rats and slithery things appeared in my head. But irrationally, I thought of ghosts in broad daylight. I tell people that I’m not scared of ghosts (I don’t believe in their existence), but I’m scared of what a human being can do to another and though the place is abandoned, I can never be sure if its absent of people.

Next door, an old man watched on. I eyed the clear blue skies with dancing birds while listening to the rustling of leaves combined with the sounds of engine revving. I felt I could be hypnotized to sleep there and then, but I directed my attention at my photographer whose energy was quite infectious. We took so many photos and with so much material to go through, I hope you get to feel the vibes of that sunny day! 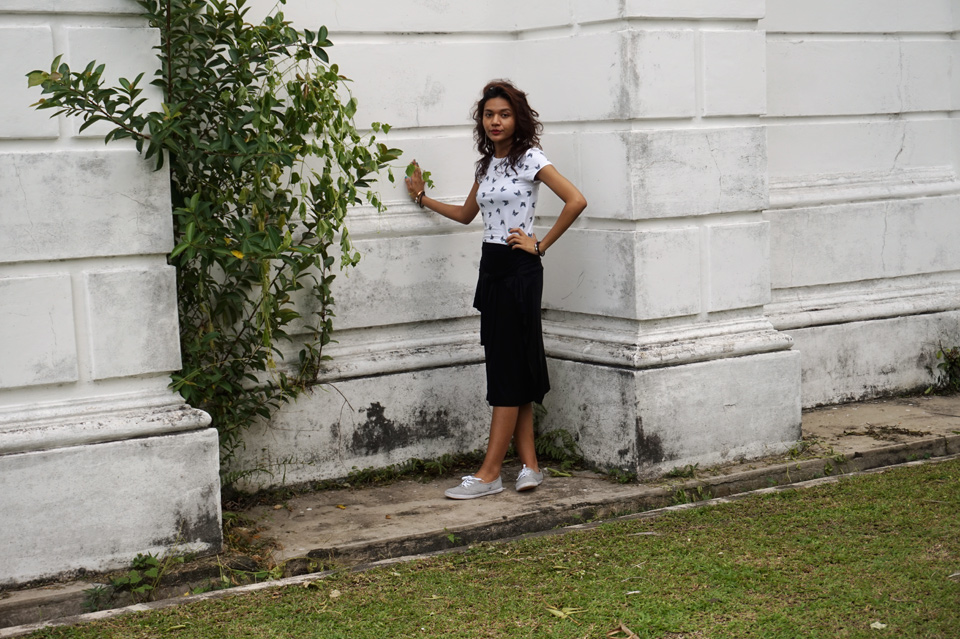 I had to contain my excitement so this was me controlling my usually wide-mouth grin. I saw a wild greenery that’s taken the corner as its home and had to strike a pose beside it. 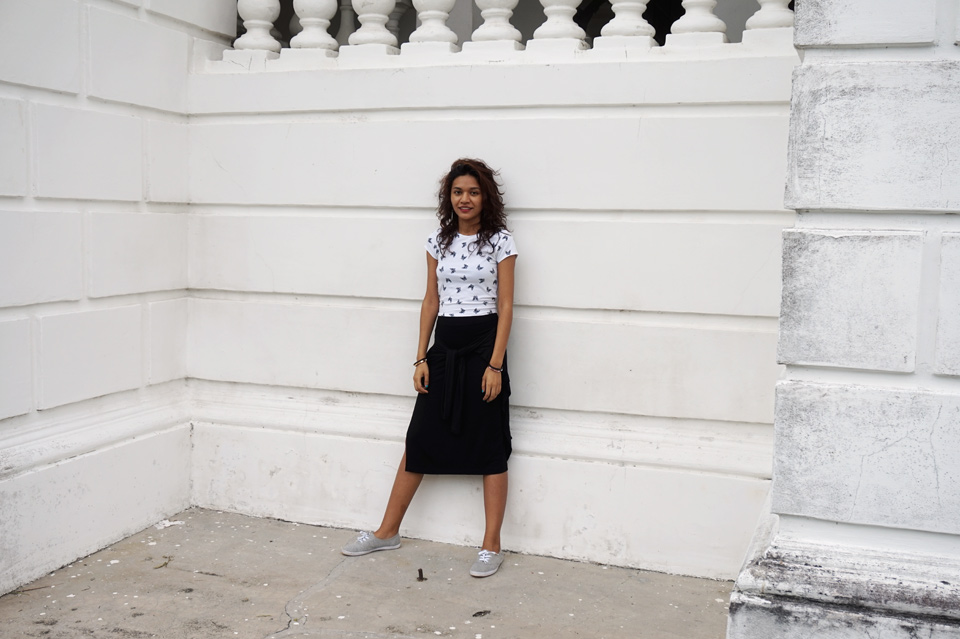 This was the face of someone who was happy that the place was hers alone. On weekends, the old library gathers quite an audience with their own shooting projects, so yay weekdays. 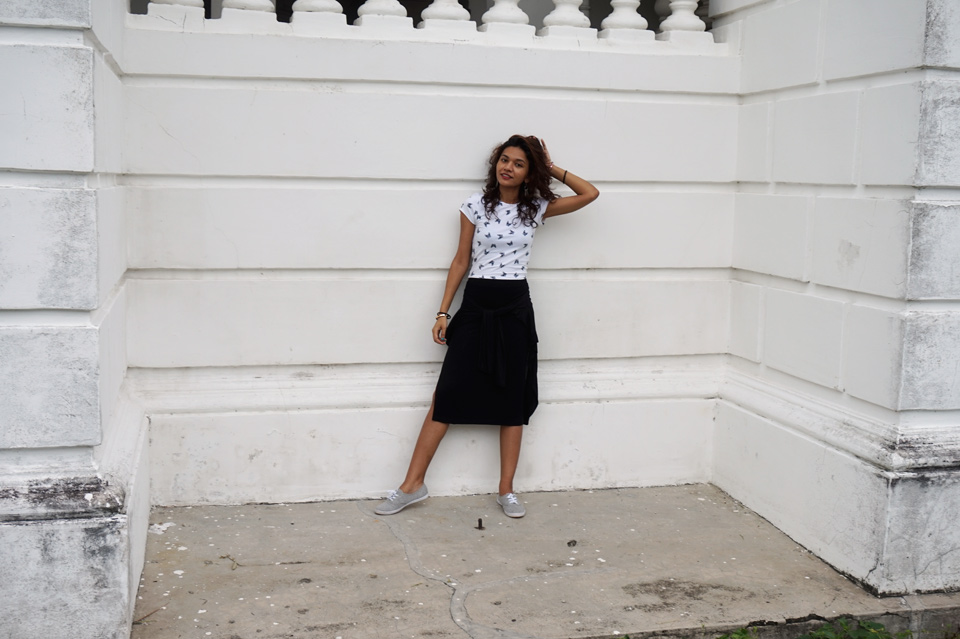 I don’t know why I like to stand in front of this wall with the weird metal in the center. I’m guessing it had once been a flag post. I’m uncertain. 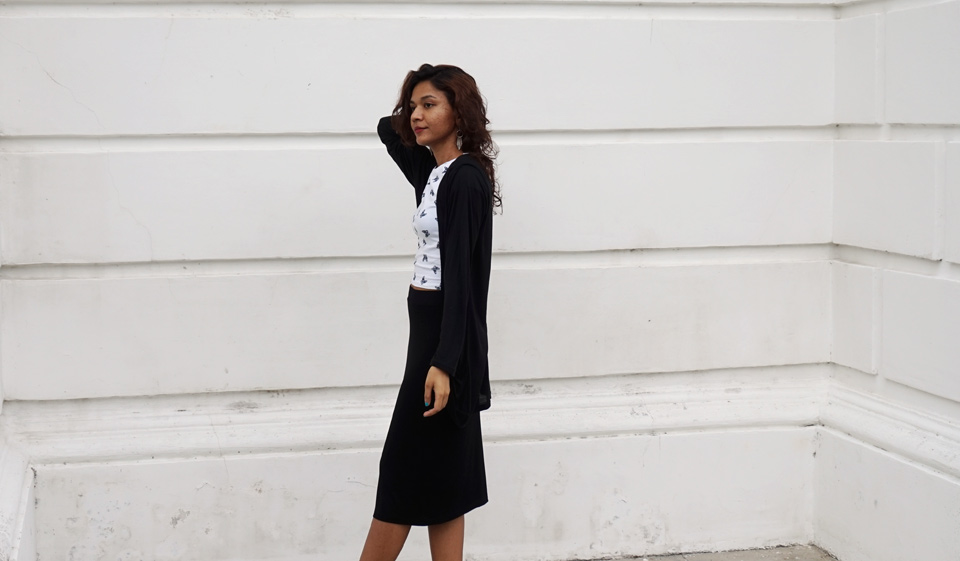 Oh wait, I forgot about the outfit. I wore a crop top with bulldog prints on them. From afar, they look like butterflies. I love the contrast between the two; butterflies embody a gentle presence and bulldogs, well, they exude a resolute and firm presence. I read that bulldogs form strong bonds with children – how interesting! 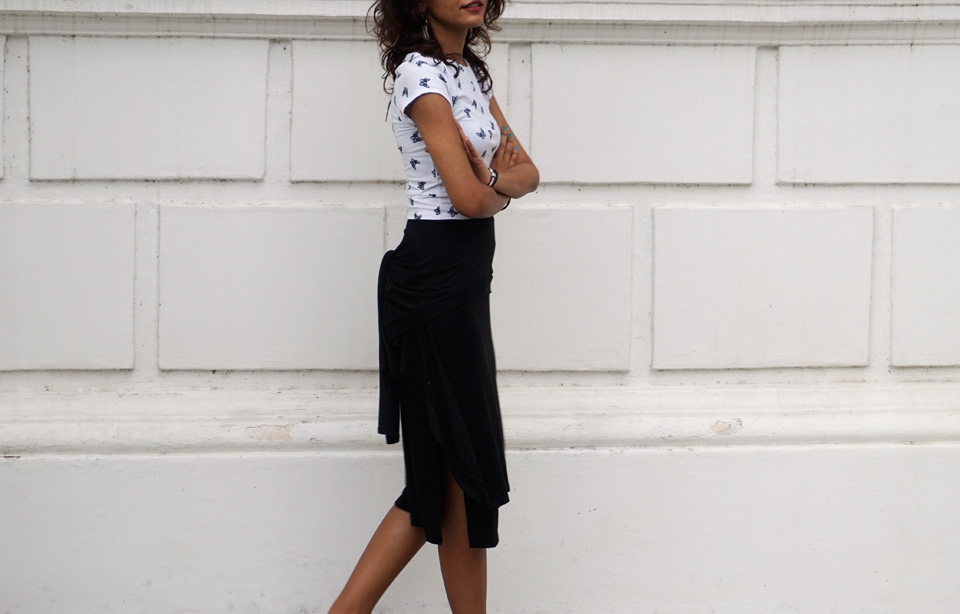 I changed the way I tied the cardigan around my waist. At first the knot was in front, then it faced the back. It kind of added a bit more of a tushie presence so that’s something. 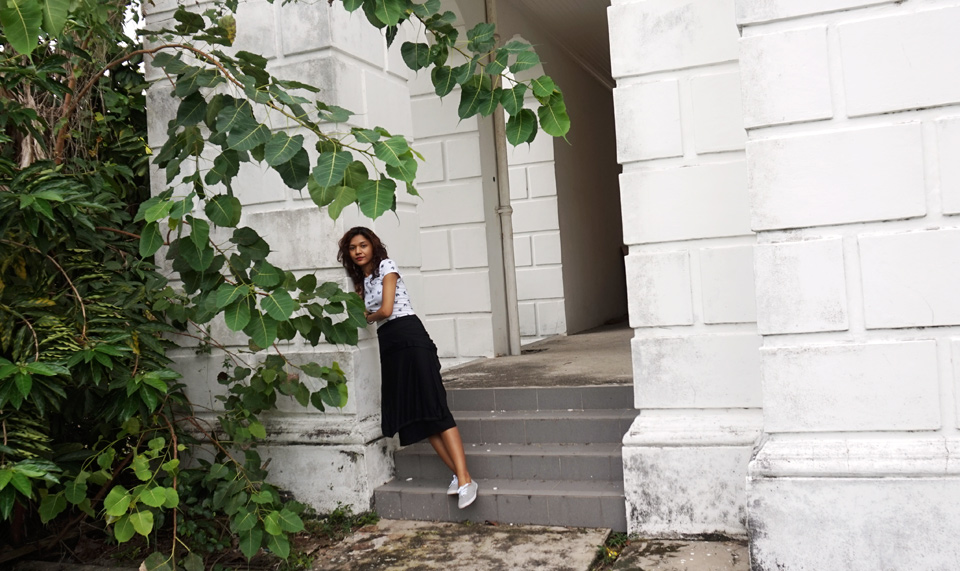 Chilled by the pillars after checking for bird poo. Grand nugget of info, there. 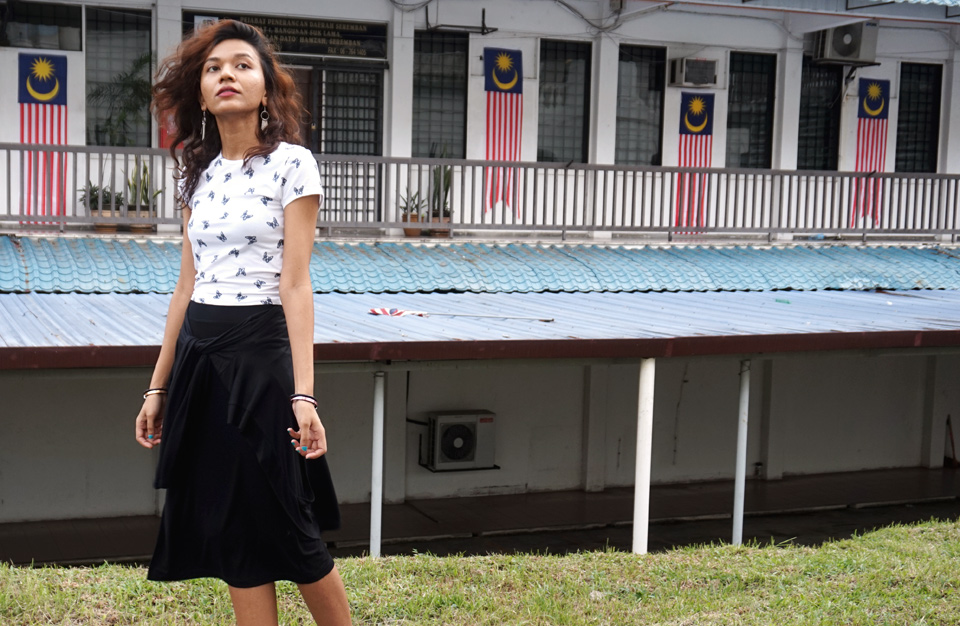 Those are Malaysian flags on the old government building. 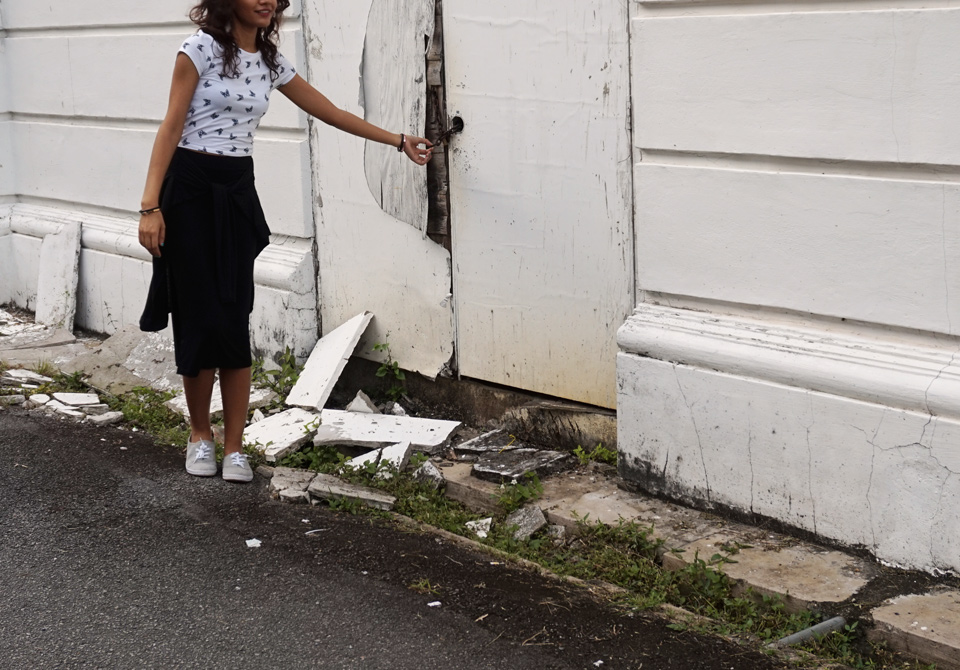 My glee at finding this backdoor got me imagining all kinds of spooky things. 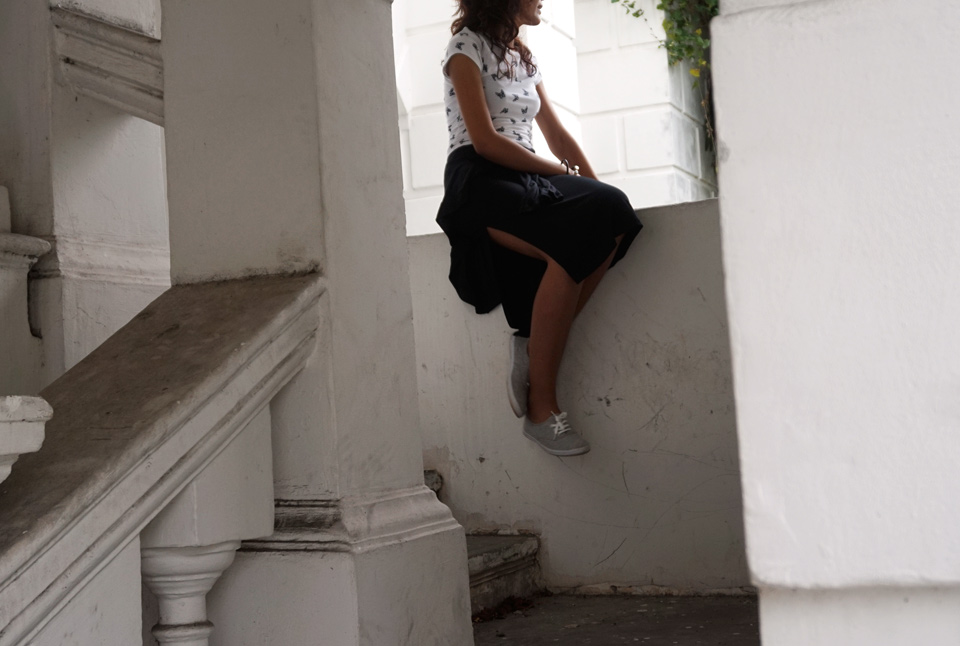 I climbed and sat on the wall looking out imagining I was Rapunzel with practical hair and the prince had brains so he used the stairs. 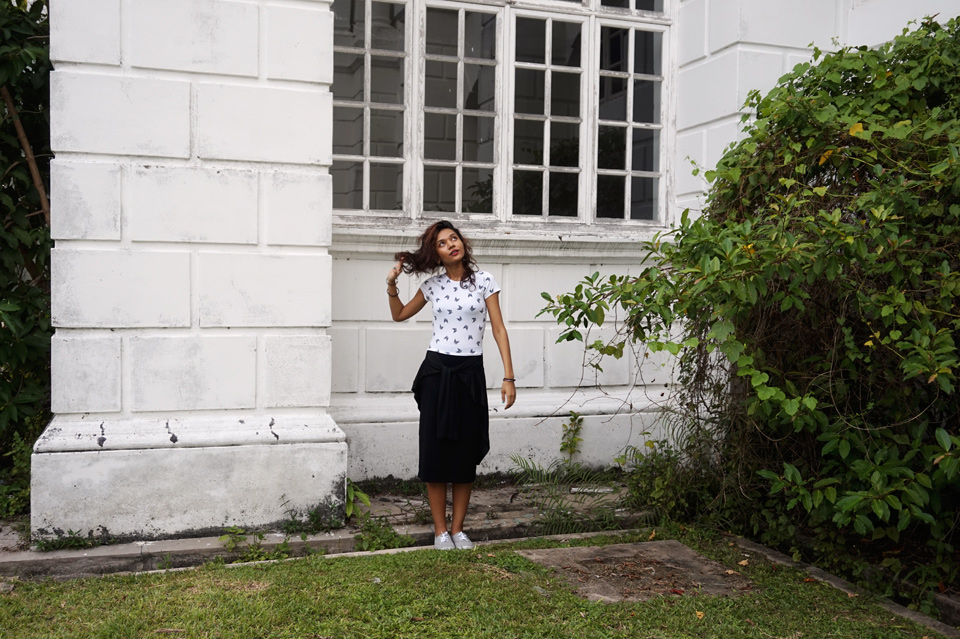 Saw another wild plant and had to stand next to it, while checking out the beauty of a broken down window and rooftop. 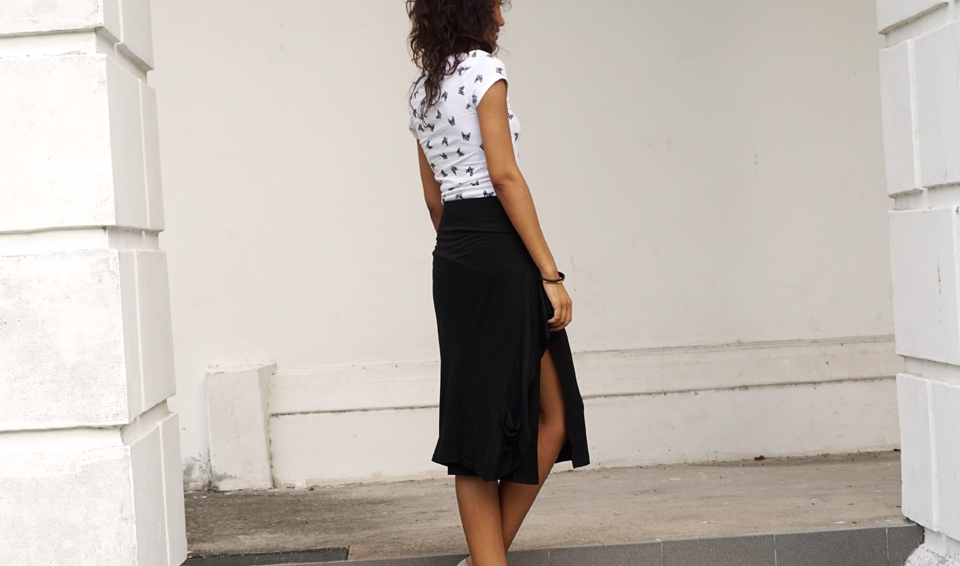 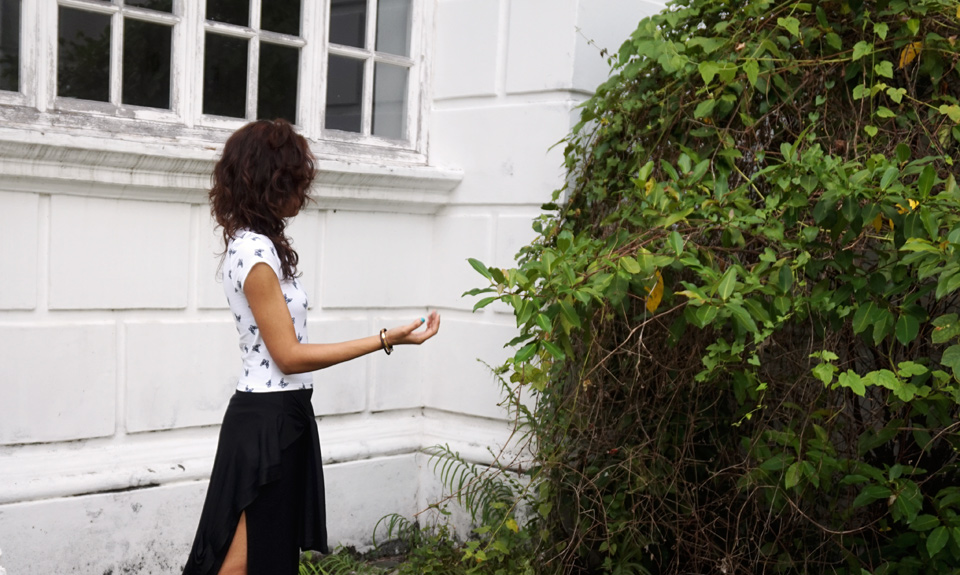 The black midi skirt is made of light cotton and has a side slit, making it awesome for ventilation on a predictable sunny day in Malaysia. I heard sounds of critters behind the green and did not touch the vegetation. I sent whispers, saying hi and that I was harmless. 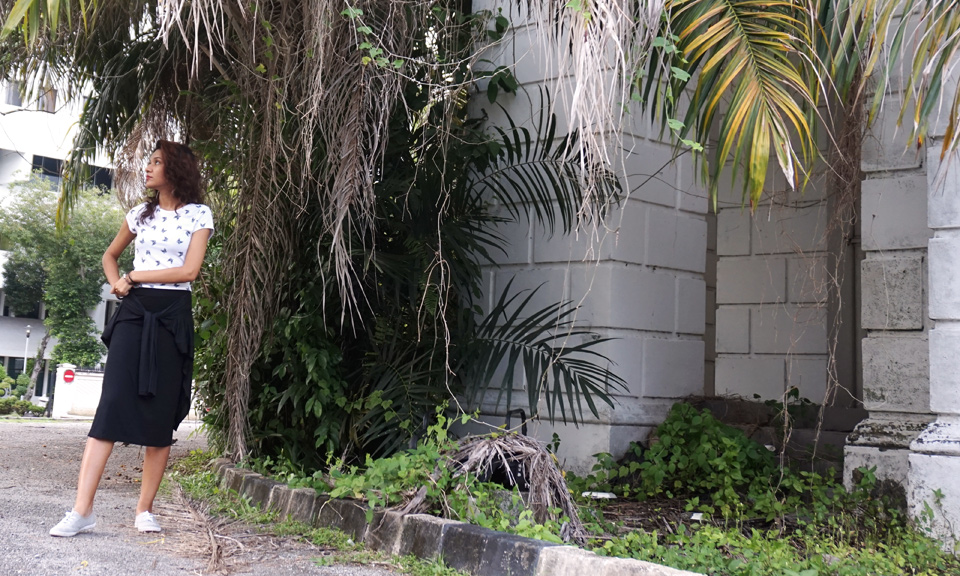 This palm tree had wild greenery growing over and all around it. I quickly fell in love. 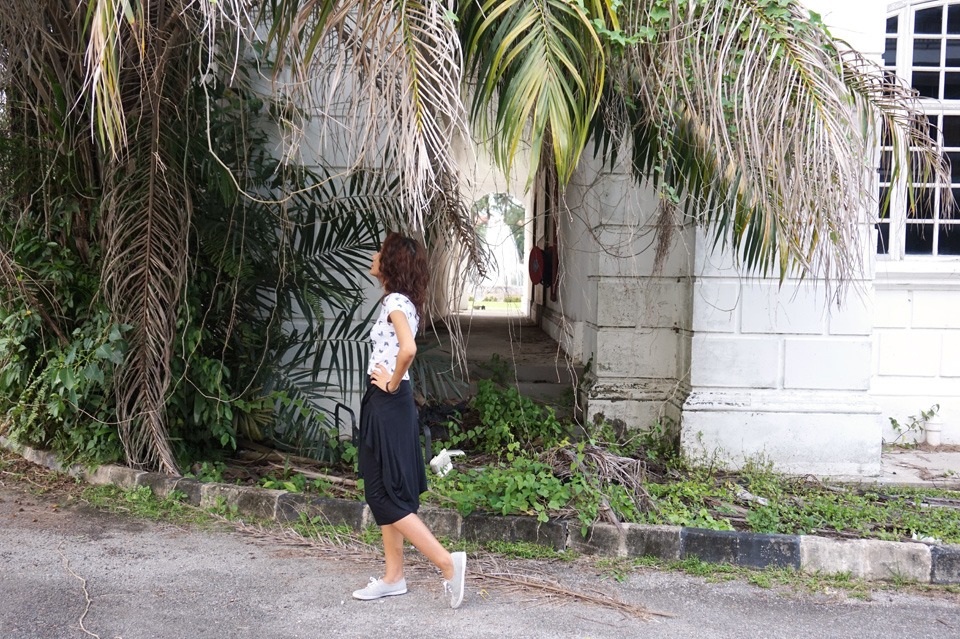 So, what do you think of this outfit? Be sure to share your thoughts! I love reading them and appreciate each one! :)

As always, I'd like to end with a quote by Mooji: