In Which I Cry in the Jewish Quarter 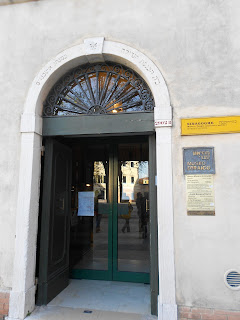 Filled with delicious gluten-free pizza eaten just meters from one of Venice's lovely canals, we threw away our map.  Finding specific spots in the city is a nightmare - streets twist and there are only so many bridges across watery thoroughfares, street names are often inconspicuous and - well, it's just way more fun to take whatever path beckons the most, if you have the time.

Our feet led us to an amazing adventure.

Before too long, we realized that the signs had changed.  No longer were they only in Italian.  They were also in a script that looked  a lot like - yes, it WAS - Hebrew!  We had noted earlier  that our map of the city had described the Jewish Quarter - and here we were.

At once, our eyes were drawn to a large section of wall on one side of the square upon which were bronzed plaques. 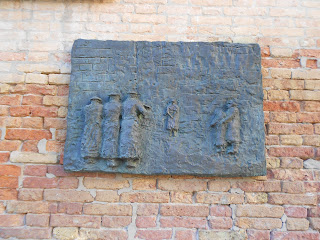 The plaques commemorated in artistic form the atrocities of the Holocaust.  Even the beauty of Venice couldn't hide the ugliness of racial hatred.

I have never seen a Jewish Memorial of this sort in person.  Whether the walk or the square or the pizza or the subject matter or my sensitivity - I can't explain why I reacted as I did.  But as I solemnly gazed at these remembrances of horror, Canadian tears spilled and mixed with Italian dust on the cobblestones. 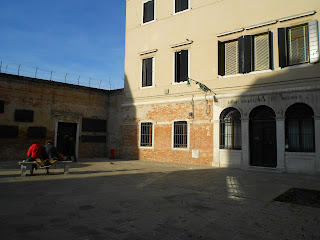 I was struck by the horror, the humanity, the suffering.
It took me a few moments to regain control of my face and heart.  Only meter away stood a rail car, which had transported hapless Jews from this very spot so many years ago to camps of annihilation.  I felt the sorrows of the years as they congregated in those bricks and mortar, and hung about the square.

What a low, low point in our human history...

Across the square stood the Jewish museum and bookstore.  We were able to book a tour of 4 local Synagogues.  Unfortunately, no photos were allowed within these amazing buildings, but it was a thrill to be invited inside nonetheless. 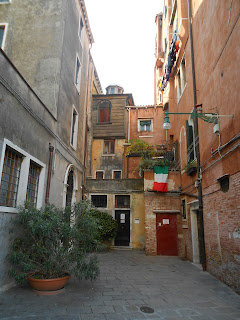 The synagogues were all built on upper stories of existing buildings in order to hide them from prying eyes.  The only outward sign to a seasoned eye was a set of 5 windows in the space designed for only 4 along one wall.

Each synagogue, being built for and by a different ethnic population, was unique in design.  We were able to see the German and Spanish sites, the Spanish being the most elaborate.  There was an incident in this synagogue in which a bomb landed on the altar, undetonated.  Every year on the anniversary of this remarkable event, the local community celebrates the escape from disaster.

While most of the activity in the Jewish Quarter today is business-related, it was still a unique opportunity to peek inside a world within a world, a community representing a people of rich, diverse, ancient roots, and I am grateful for the chance that led our feet into that square.  It was fascinating to read signs indicating a 'Kosher Deli' or a 'Rabbinical School'.  The shops flaunted art, jewelry, and artifacts of Jewish design.  And everywhere were the conspicuous Hebrew letters - on and over doors, in shops, on placards and menus and newspapers.

It was yet another richly satisfying cultural and historical experience, one that you hug inside and allow to worm its way into the way you think and see the world.