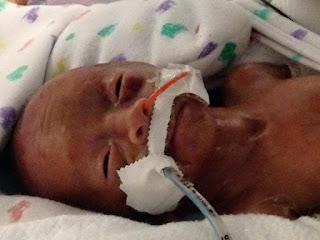 I thought I'd lead with a picture today, because really you just wanted to look at him, didn't you? Though he theoretically can't see yet, he's opening his eyes and turning his head toward his moms.

It's day 7, which is very exciting. Of course, it's exciting simply because it means that Jesse has been holding his own for a week, but it's also an important landmark: 90% of brain bleeds in premature infants occur in the first seven days. Jesse was scanned last night and he's all clear. So, that's one major sigh of relief we can all breathe.

There are still some complications, which are to be expected. He has two small holes in his heart, which are not unusual at this stage and often close up on their own as the baby grows. We're hopeful that they'll resolve themselves, but if not, we have good treatment options.

He's also spilling a little salt in his kidneys, so his sodium levels are low. Again, this is to be expected at this stage and is being treated.

On the upside, he's started to gain a little bit of weight, and he's as feisty as ever. Kicking and waving his arms and making a valiant little effort to remove his equipment. That fighting spirit (and your good thoughts and prayers) have brought him this far--please keep them coming!

On the home front, mom has had a rough week. She had to make a trip to the emergency room two nights ago and was diagnosed with pregnancy-induced hypertension (though I'm pretty sure stress is playing a role in that, too). She's on medication now and doing okay, but I wouldn't mind a bit if you added her to your prayer list, too.

Read the next update here.

If you missed the first installment, you can see Jesse's introduction to the world here. We'll keep you posted.