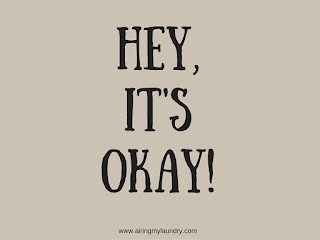 So, I'm trying to think of what's okay today...

Really reaching for this one because there is so much 'not okay' today!

I got it! It's okay that the thought of Trump becoming president makes my skin crawl.

It's okay that my brother called me a village idiot because Trump makes my skin crawl.

It's okay that my brother unfriended me on Facebook because he apparently doesn't want village idiots on his team.

It's okay that I haven't finished the quilt for baby Kassie, who arrived this morning at 7:42. I've been sick and don't want my cold-kooties on the quilt.

It's okay that I took an extra 5 minutes in the shower this morning to just be 'one with the water'!

It's okay that I am tossing out so much stuff that used to mean so much to me, though, to save my life, I can't remember why half of it was important.

It's okay that I still feel scared, angry and disgusted about our president-elect.

It's okay that I'm not going to 'get over it' like my conservative family and friends demand.

Well, hell! It just doesn't feel like It's Okay Tuesday, does it?