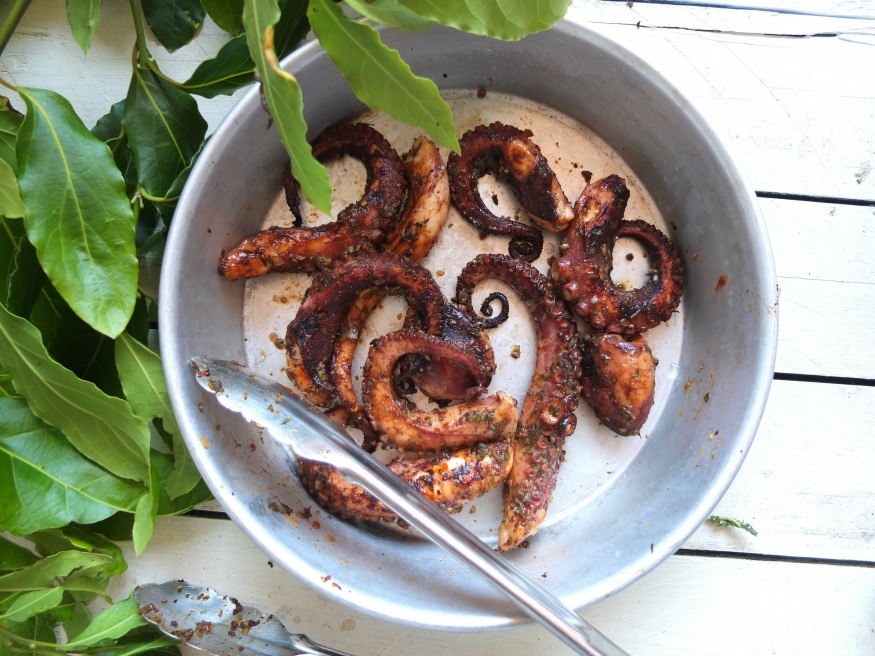 It’s fair to say I’ve had a few disasters when it comes cooking octopus. People still say to me, in actual real life rather than just on the Internet, “OH MY GOD THE RED BAG THOUGH,” referring to the time I cooked one in a bag and it came out looking like someone’s blood donation. A friend said this less than a week ago, and the Octopus Red Bag Incident was in February 2013 – we are all still traumatised.

I was experimenting with sous vide at the time (yeah I know, but we all did it) and the octopus released its juices into the sous vide bag and I wasn’t aware that those juices are naturally quite red. Pulling that thing out was quite the shock and I was then too scared to eat it. 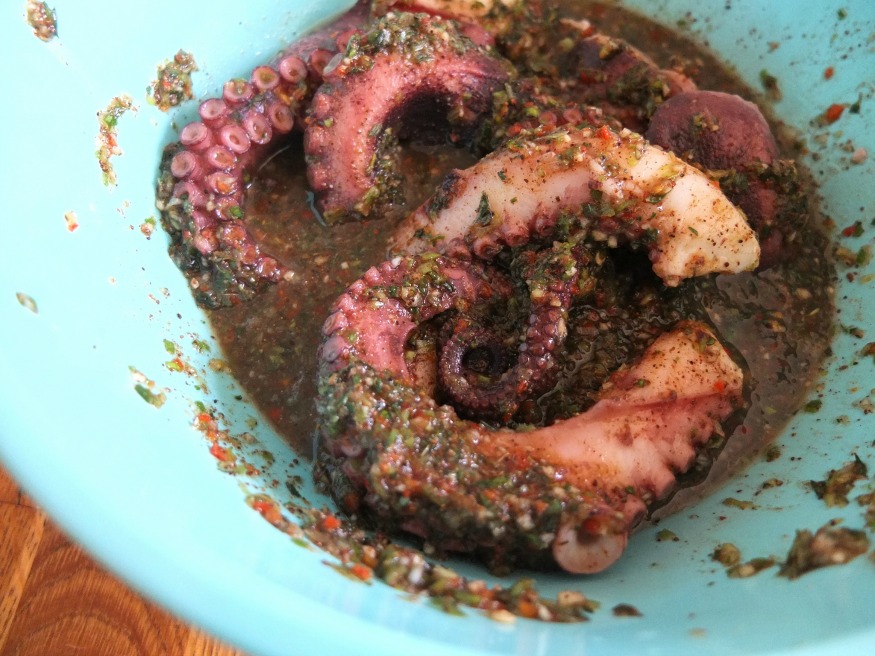 Suck up that flavour.

There have been other issues – mainly to do with getting the octopus tender, and you’ll come across various bits of advice. People will tell you to put a cork in the water when you’re cooking the octopus but don’t bother. I read somewhere that this myth probably comes from a time when they were cooked in huge tubs with corks and string tied to them – the cork would float and make the octopus easier to pull from the water. 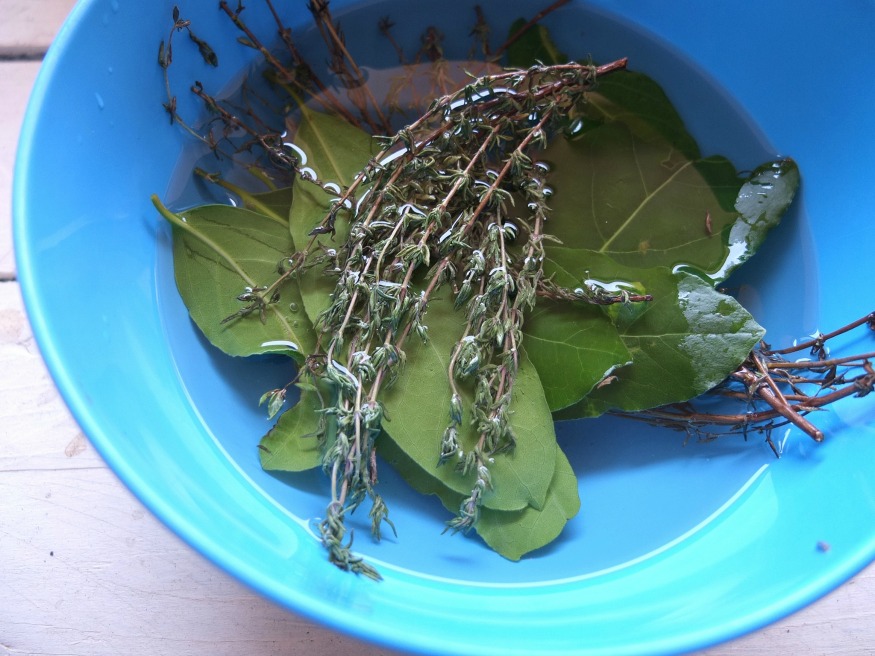 I buy a frozen octopus because it does seem to make a difference to the texture and they’re more readily available (though not cheap). I then cook it in a pan with a little water and its own juices – they release so much that it’s enough to simmer them without adding much else although of course, you can add red wine or whatever you like. Once its tender around the skirt (the bit where the tentacles join the head), you’re good to go. 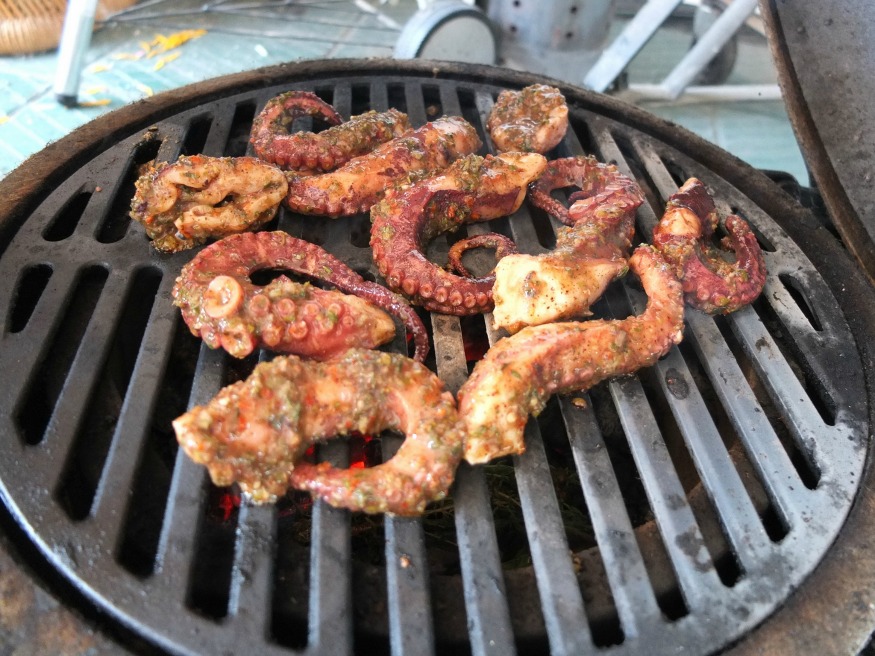 So I wondered why no one ever seems to jerk octopus because – and I’m not even joking here – it tastes quite a lot like chicken. You can jerk seafood too of course and it just all made sense. Was there something I was missing? Well, no, is the answer. The only thing I was missing was jerk octopus in my life. Yeah, it’s a bit of effort but this magnificent creature is prime for a bit of jerkin’ – marinate as usual once it’s cooked, then crisp up those tentacles on the BBQ so they’re charred outside, tender on the inside… fabulous. 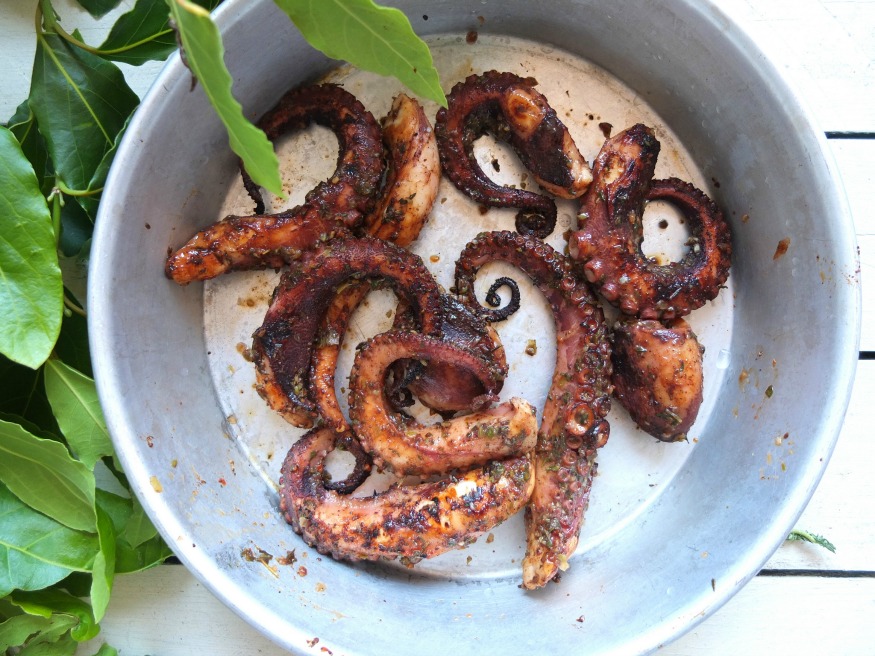 We ate it with the most unashamedly 90’s rice salad and I’ve now decided I need to write about that separately. It has huge nostalgic significance for me. Here, then, is a recipe for jerked octopus. There are no sous vide bags, no corks, no shocks and hopefully no mental scarring.

Thaw the octopus and put it in a (lidded) saucepan large enough to fit it comfortably. Add some water until it comes halfway up the octopus. Bring it to the boil, turn down to a gentle simmer, put the lid on and cook very gently for 45 minutes to and hour, or until tender when you poke a knife in into the top of a tentacle (where they join the head).

Allow the octopus to cool, then remove the tentacles.

Blend all the marinade ingredients and combine with the octopus. Leave for a couple of hours in the fridge if you can.

Cook the octopus on a BBQ over direct heat – it won’t take long. With chicken I make a bed of bay leaves soaked in water to cook the chicken on but the octopus isn’t on there long so this time, I chucked them in the coals with some soaked thyme which makes lots of lovely, scented smoke. Cook the octopus, flipping frequently until a little charred, brushing every now and then with the marinade (remember: the octopus was cooked before it went in the marinade so there’s no need to worry about contamination).

Serve hot with your choice of sides.