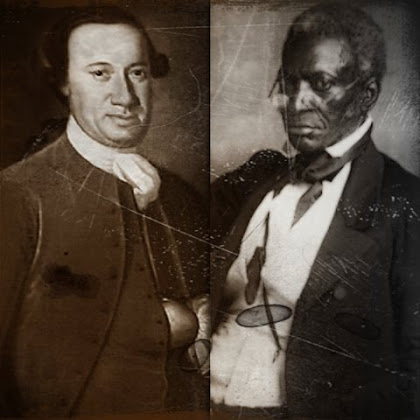 I blogged a post on John Hanson was First Black President in US as well as Samuel L Jackson and John Hanson looks like Reincarnation. Sometimes portrayed as John Hanson Moore because another person has the name John Hanson, they often get confused with each other.

Gonna need a beer to figure this one out!

The white John Hanson was elected as President of the United States in Congress Assembled. Some call him the first president, even though George Washington is seen as the first president of the United States. The black John Hanson (John Hanson Moore) was the first black president. Then others are saying no, he was not the first president but the President of the Continental Congress and not of the United States. It is all confusing and could be purposely done so no one researches the truth. What we thought was the truth is not so true anymore and what we thought was fairy-tale is turning out to be more real than what we thought was real. No matter what the truth is it is important no matter what the truth is it still needs to be told of what is true for this dimension of history. Each dimension of earth has a different history of truth.

Then I had the thought that what if this is some type of Mandela Effect. Such as an example many people are claiming that Eli Whitney was black but now is white. Then I wonder is the same thing taking place with John Hanson as blogged about in Two Abraham Lincoln in White and Black. Could John Hanson and John Hanson be a Mandela Effect or simply a glimpse into a parallel reality as blogged about in Dick Gregory and Abraham Lincoln in Black or White.

The conspiracy theory taking place that many people wonder are they the same person. John Hanson is hidden with confusion. The fact that we had black and white presidents before George Washington was very much hidden from United States history books and online.

It feels like John Hanson and John Hanson are separate people that were both presidents and not a Mandela Effect. Although everything has a parallel life of the opposite taking place. In a sense, white John Hanson and black John Hanson, both of their history has been hidden. In school, I never learned about anyone named John Hanson. Our history books are making it seem that nothing took place in America before George Washington. We are taught what to believe compared to the true history of what actually happened. The true history of the earth for this dimension is starting to show itself to be read and heard within everything hidden is now seen.