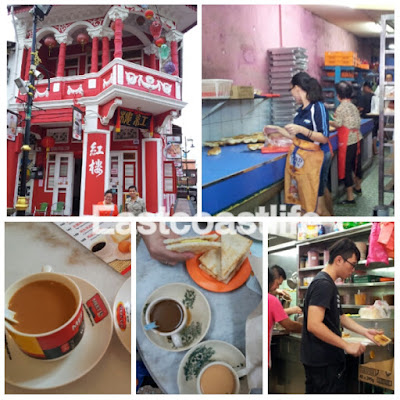 Together with hubby and foodie friend Angie, we went across the causeway to Johor Bahru Old Town for some old school food. Whenever we have Angie for company, it's usually an enjoyable experience with lots of laughter and good food.

As a regular day tripper to JB, naturally I took the lead and showed them the shortcuts to JB old town. When hubby wondered aloud how come I was so familiar with JB roads and places, I froze. OMG! I realised then that I was revealing my usual hunts in JB to him. Ahhhh ... ! Shucks. 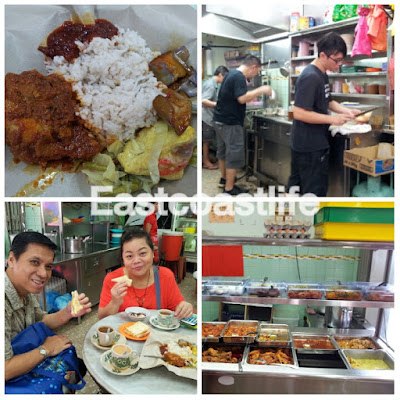 First stop was to crowded Restoran Kin Wah for its traditional breakfast set of toasted bread, 2 half boiled kampung eggs and coffee for Angie; I had a teh-C (tea with evaporated milk) and hubby ordered another slice of toast but was devoured by Angie because she like the toast. haha..... Total amount spent was RM11 for the three of us.

It was a late breakfast as it was already past eleven o'clock. I was famished and opted for a portion of nasi lemak (coconut rice) with side dishes of spicy chicken, brinjal and curry vegetables (RM8). I don't know if they charged me for the sambal chilli. The nasi lemak was fragrant, tasted good with the chilli paste and spicy side dishes.

Angie was rushing to foot the bill, but when she brought out an old wallet .... gwa gwa! 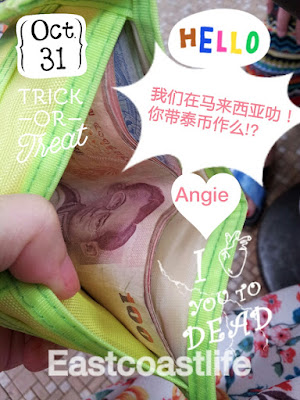 The blur queen brought Thai baht!! How to pay with Thai baht? I'm not surprised if she had ended up in Changi Airport that morning. LOL

She was quite upset with herself, so we had to console her and finally we had a good laugh over it. The kind and generous lady had wanted to shower us with yummy food treats but her plan failed. I loaned her RM100 so she could at least buy some souvenirs back. 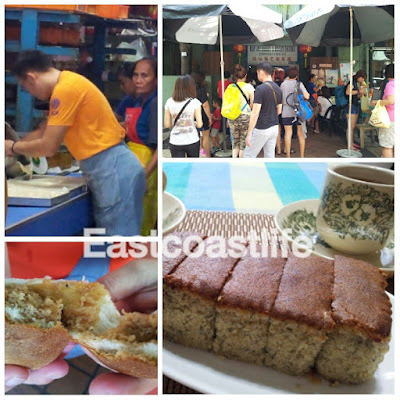 After breakfast we strolled to Hiap Joo Bakery opposite the coffee shop to queue for its popular banana cake. There were two queues: one for its freshly baked buns and one for banana cakes. Angie met her relatives who offered us a hot-from-the-oven coconut bun. 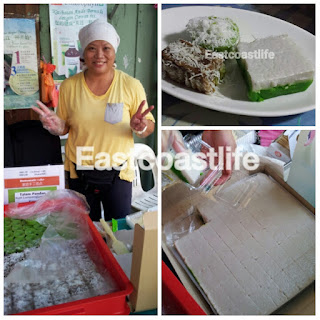 There was a lady outside the bakery selling some tempting Nonya cakes. She had made them that morning. One piece cost RM1.20, 4 pieces cost RM4. I bought 4 pieces from her.

I like the yummy coconut taste of the cakes which were soft and moist, were not overly sweet. Closed on Thursdays and Sundays, she would be selling different types of Nonya cakes depending on what ingredients she could get from the market that day.

As the banana cakes would only be ready at 12.15 pm, Angie and I decided to take a walk along the Tan Hiok Nee 'Culture Street', leaving hubby to queue for the cakes. 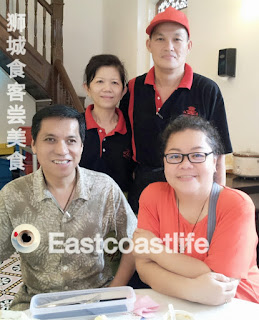 I brought Angie to Red House as I wanted to buy the Giant Chicken Burger for my son, but the eatery changed management recently and a completely different menu was offered. Crew member Sylvester approached us to recommend their specialities. Angie was attracted to an old school Hokkien dish and so we decided to try their food.

We ordered a coffee and their special Hainanese milk tea (RM3), Angie liked the tea so much, she ordered another cup. We reserved a bowl of old school Hokkien porridge (RM6.80) as it was only available for breakfast and Angie wanted to wait for my hubby to come so he could taste it too. Awww ..... 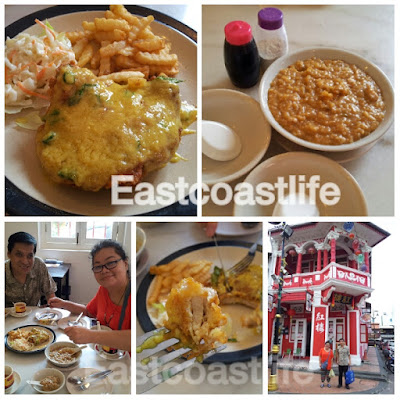 Sylvester recommended their special crispy Chicken Chop with Salted Egg Sauce (RM16.80). It was served shortly when hubby arrived at 12.48 pm with the freshly baked banana cakes. We shared the chicken chop. What a yummilicious dish! Angie didn't seem to have enough of it. haha.....

We met the chef and owner of Red House Mr Tan and his wife. They and another partner had just took over on 1st October 2016. We had a good chat with Mr Tan who has been in the food and beverage business for 30 years. Looking forward to trying his other dishes on our next trip.

Several Hainanese kinsmen came to meet hubby and we had a chat and took some pictures. And one of these gentlemen paid for our meal. They invited us to their clan premises nearby. 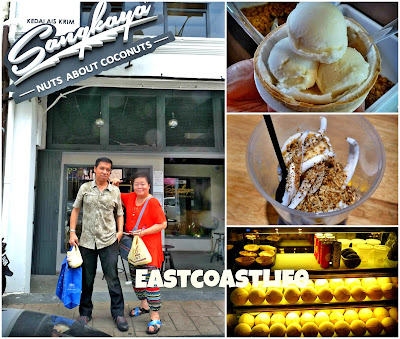 We went for Sangkaya coconut ice cream after visiting the clan. We ordered their signature coconut ice cream, cendol and coconut shake. As it was a sunny day, we lepak (relax) in the air-conditioned cafe to enjoy our chilled desserts and chit chat.

I have scheduled to return to Singapore before 4 pm to beat the congestion on the causeway, but Angie was raring to try more traditional food. I brought her to Sekee Coffee Shop to eat the Teochew kway teow soup (flat rice noodles), but it was closed. 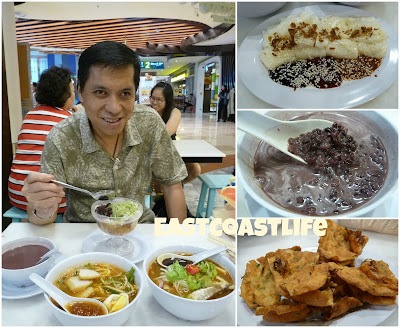 We walked back to City Square and Angie brought us to Nyonya Leaf for a late lunch. She ordered Assam Laksa, Penang Prawn noodles (no prawns as they were sold out), 2 prawn crackers (too hard), chee cheong fun (steamed rice rolls), bubur cha cha  (sweet potato and yam dessert), bubur hitam (black glutinous rice dessert) and cendol. The meal cost about RM62, Angie insisted on footing the bill.

Angie discovered Daiso,  we went in to have a look-see but came out with big bags of purchases. LOL.... Angie was left with 10 Malaysian sens after the shopping.

I bought many glass containers. At our Singapore Customs, I was told to remove the newspaper wrapping around the glass bottles for inspection.

Angie and I went our separate ways after clearing Malaysia Immigration as we stay at different ends of Singapore. I took an express bus back and reached home around 8 pm. It was a tiring and enjoyable day for me. 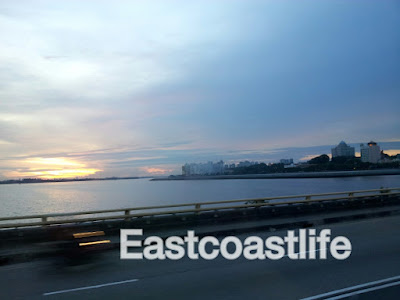