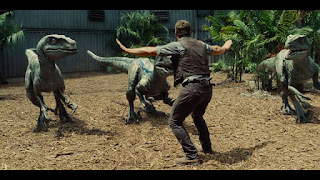 ARTH VADER (AV): The Jurassic Park series of films is one of the tried and true (and mostly successful) of Hollywood’s formulas. Inspired by Michael Crichton’s Jurassic Park series of New York Times best-selling books, the story of a park of genetically produced dinosaurs that goes way off the rails has been a hit for an entire generation. The story hits on beats that were established in earlier films while keeping a surprisingly fresh perspective. 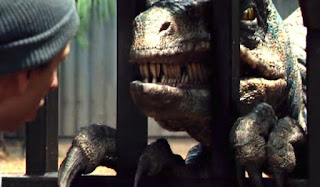 THE PONTIFICATOR (TP): A continuation from the original film, this movie takes place 22 years after the original and keeps the continuity of the cinematic world that is Jurassic Park alive and well. There is even an original cast from the first film here…still splicing together the DNA of dinosaurs…and still clueless as to why you should not do that. 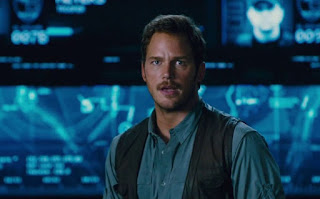 AV: I firmly believe that the casting of Chris “Starboard” Pratt and the on-screen chemistry he clearly has with steamy lead actress Bryce Dallas “Gwen Stacey” Howard and likable villain Vincent “Wilson Fisk” D’Onofrio, Jurassic World was doomed to succeed. Sure, sure doom isn’t the most ideal word but it is fitting seeing as the that’s where the franchise was headed. And relative newcomer director, Colin Trevorrow, brought Site A (Isla Nublar) come alive onscreen. Pratt’s raptor trainer was so fun and made was such a preposterous possibility, it was a delight. How say you my dino-watching co-host? 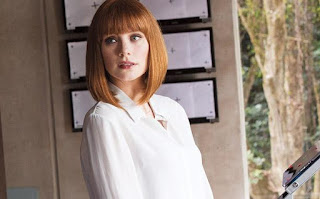 TP: This film was well cast and well acted. Chris Pratt’s stock continues to go up as he shows he works just as well with dinosaurs as he does with aliens and talking raccoons. Bryce Dallas Howard has received the torch (as passed) as the new park director and taken her place in Jurassic history. Of course it was a real treat to see Vincent D’Onofrio slip once again into the role of the “bad” guy. The film had a steady pace and kept me engaged from the beginning as the build up to all the death and mayhem was filled with interesting characterizations of the actors and the dinosaurs. 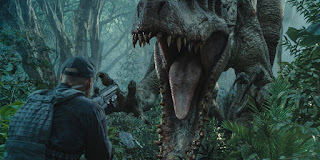 AV: True to Jurassic form, Jurassic World was a top-notch visual spectacular. The film was chuck full of dino-tastic effects. Old friends such as the Velociraptors, the trikes (Triceratops) and Pterodactyls all returned to the story, brought to life once more by the magic of CGI-enhanced cinema. The film stimulated audiences further with he introduction of several more species but in all fairness, the effects were an integral but not ‘primal’ part of the storytelling and while the movie does rely on a great deal of content from the visual effects folks. Was the Pontificator blown away by the dino-rich visuals? 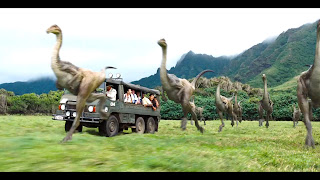 TP: I keep ringing the IMAX 3D bell…but don’t know if anyone is hearing me Vader. The special effects were awesome. They were in-your-face and make-you-jump and I loved every bit of it. Sometimes, new ground need not be broken if you do all the present techniques perfectly. There is a reason JW is breaking records! 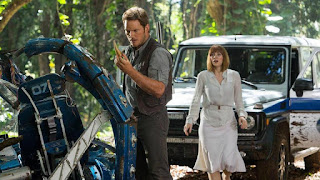 AV: How do you take a failing iconic franchise and breath new life into it? Add liberal amounts of Chris Pratt, stir and repeat. Chris is a stunning addition to the Jurassic cast of adventurers and we all but hope that he continues on to some kind of consistent appearance in the franchise. Just about everyone else is a throw-away character, so it goes. The revitalization of this great franchise is in the new synergy of the cast, new dino-dangers and some great sci-fi-a-storic writing. While the film follows the classic formula of new dino-park, something goes wrong, dins eat people, showdown and the kids survive. Did I miss anything? Likely not but Jurassic World flourishes under this all-too familiar formula wouldn’t you sap, P-Man? 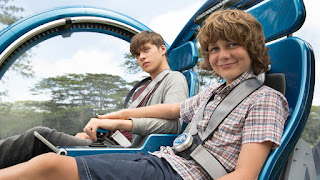 TP: People love dinosaurs done right Vader. Really, there was nothing new here. Scientists were still splicing dino’s and tampering with forces they should not have been, leading to chaos and death, and resolved by the very creations responsible for the problem in the first place. If you take a moment to really reflect on the film, everything we saw has already been seen and easily predicted. I think it speaks volumes about the film that this is so…and it was STILL so enjoyable to watch! I could put it all on the I-Rex, but I had already guessed about that long before they revealed it’s origins. No…it has to be the total formula that is “Jurassic” that is drawing people to the theater out of love for the previous films…and hooking them with the same (but updated) formula of tried and true success. 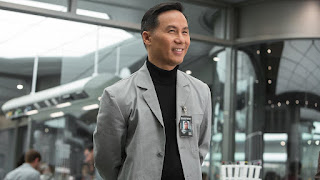 AV: Where do you take a franchise struggling to find new engaging story content? Well definitely off of Isla Nublar. Several folks I have talked to have formulated a pretty sound theory; Jurassic War. It stands to reason that IN-GEN, now backed by the military, will be ready to step up its monster-warrior program. Velociraptors with rocket launchers on their shoulders… what could possibly go wrong? 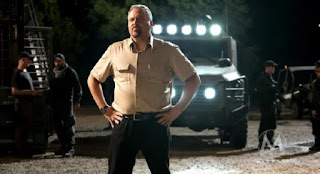 TP: Honestly…I think as long as they make a good story that makes enough sense, they can always do a “Jurassic” film. As it turns out, some dino DNA has escaped destruction and some dino’s remain on the island, leaving the door wide open to continue the franchise. 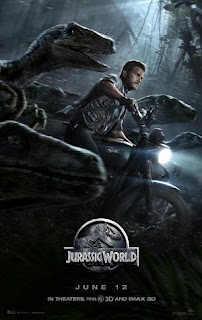 ARTH VADER rates Jurassic World: A refreshing, fun journey through a lost world of new monsters, old problems, new technology and mayhem, Jurassic World delivers. Overcoming some downright silly moments–like when Chris Pratt is tooling through the jungle with his pack of Velociraptors, is more than ridiculously over-the-top but it somehow works. With that, this is one dino-loving fanboy who had a thoroughly good time and strapped nine (9) Busted Blocks to some Raptors and watched the fun unfold.

THE PONTIFICATOR rates Jurassic World:  This is truly a “summer” film and fills that need to sit back and be thoroughly entertained. There will be no acting Oscars here, but the acting was great, the story was good, and the effects were supreme…making this a whole lot of fun to watch. Adding a new dino’s to the classic (and usual) suspects paid off big and took a huge bite out of eight (8) busted blocks.