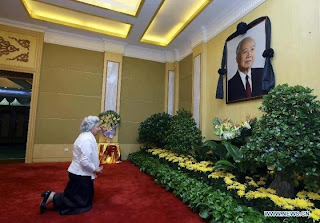 King Father Norodom Sihanouk passed away today in Beijing at the age of 89, 59 years after he declared Cambodia's independence from France.

Sihanouk was a greatly charismatic leader revered as something of a God King during the height of his power in the 1950s and 60s. He served both as King and then Prime Minister after taking the daring step of abdicating from the throne to enter politics.

In 1970, he was ousted as Prime Minister in a bloodless coup d'etat led by the right-wing general Lon Nol and watched from exile in China as Cambodia slid further into the turmoil of the Vietnam War that preceded the genocidal Khmer Rouge regime.

The prince returned to his country after it fell in 1975 to the ultra-maoist Khmer Rouge regime responsible for the deaths of an estimated 1.8 million Cambodians, torture, rape, forced labour camps, starvation and the decimation of the country's economy and was placed under house arrest. Several of his children and grandchildren were killed by the regime.

As Cambodia began to recover after the Vietnamese-backed guerrillas liberated the country from the Khmer Rouge in 1979, Sihanouk once again entered into the political fray but was unable to negotiate his way back to the ruler, finally abdicating the throne in 2004 to his son, Norodom Sihamoni.

In recent years the retired King repeatedly travelled to Beijing to receive medical treatment for a number of ailments including diabetes and cancer. In a hospital there, he finally succumbed to a heart attack on today at 1.20 am, Phnom Penh time, Council of Ministers spokesman Phay Siphan confirmed.