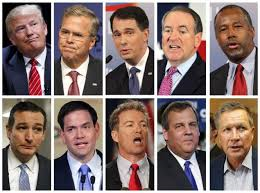 The GOP debate was watched by millions of people, many of whom only wanted to see how the "front runner" would fair against a field of real politicians, and one neurosurgeon.  And, yes, I did watch it, in bed, with a glass of wine and a couple of Bayer aspirin.  Here are my views on the candidates, in alphabetical (almost)order:

Jeb Bush -  Pleasant enough, smiling, but not always telling the truth about his years as governor of Florida.  Fact check needed there, for sure.  And please!!  No more dynasties!!!

Ben Carson - What a nice man he is.  Unfortunately, he has no political experience, and in fact, has very little knowledge about how this country works.  He is not at all assertive.  He should stick to separating Siamese twins. OR he could volunteer to give one of the candidates a frontal lobotomy, and delight the rest of the field.

Chris Christie - Yes, he DID hug Obama after Hurricane Sandy.  So what, Rand????  But I don't trust him to be completely honest, plus he looks a little like a member of La CosaNostra.  Sorry!  I just couldn't help that!

Ted Cruz - He looks like a televangelist about to burst into tears.  Anyone who says, "I always tell the truth," probably doesn't.  He supports pork barrel politics, because he has a video out, cooking bacon by wrapping it around the barrel of his AK47, and firing away until the bacon is fried.  What does a "Christian" need with an AK47, you ask? You tell me!

John Kasich - The only one on the stage who appeared to be actually presidential and genuine.  I'm glad he got into the debate.

Mike Huckabee - This guy isn't a politician, but a preacher.  He will push his religious agenda, and walk all over the Constitution.  Now some people may like that, but most Americans do not.  We don't want his brand of religion shoved down our throats, or any other religion, for that matter.

Rand Paul - Rand, Rand, Rand!! You look like a sophomore geek at MIT!  And you have a tendency to get a little hostile.  Not very presidential, and way too much of an isolationist for my taste.

Rick Perry - How many times does he have to take that public speaking course and not get an F???  The glasses didn't help his image one bit, plus he has a goofy smile, and a bad memory.  Carly Fiorina should really have had his place on the stage.

Marco Rubio - Pretty, smooth talker, but without any real substance.  He hasn't been out of short pants long enough to fully understand American voters.  AND he's a suck-up.  Just ask a couple of the other candidates.

Scott Walker - Despite what he says, Wisconsin is not better off with him as governor.  Way too many questionable decisions! Lots of Fact Checks needed there!  Plus, he is VERY bad at managing his $222,899 salary.  He has between $10K and $20K in credit card debt, and one of his cards charges 27.4%, and he has $100,00 to $200,000 in student loans for his two boys in college, and so just how does he expect to manage our country? Plus, he has squinty eyes.  I never trust a man with squinty eyes.

And finally(I told you it would almost be in alphabetical order), "He Who Shall Not Be Named."-
A sociopathic narcissist who knows just what to say to get the borderline mentally incompetent fired up and cheering.  He has no respect for other people, especially hates women, and is only out for himself.  Claims that he will bring American jobs home, while his men's clothing brand is made in Mexico.  Calls people stupid.  In short, he's the last man on earth fit to be president--a total loser.

That's my take on the top 10 GOP candidates, and my  "L" post on Jenny's AlphabeThursday.  I welcome any and all comments.