&ldquo;I have the temperament of a harlot": on the life of Steven Runciman

“I have the temperament of a harlot": on the life of Steven Runciman 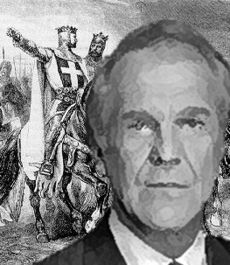 In the mid-1970s, when Steven Runciman was in his own eighth decade, he became a frequent house guest of the archaeologist (and husband of Agatha Christie) Max Mallowan. Like all who met him, the Mallowans were impressed by this charming and intellectually brilliant man, who was one of the best-known historians in the country. But one evening Mallowan confided to a friend that he had been shocked by his last conversation with Runciman, who told him “that he felt his life had been a failure because of his gayness”. Mallowan was dismayed not only because such soul-baring was startlingly out of character. As the friend later said, “I remember Max saying with huge indignation how tragic and wrong it was that Steven should feel this way.”

Tragic and wrong indeed. People differ in how they measure their own success or failure, but by almost any standards Runciman had led a successful life. His many books on Byzantine and medieval history had been acclaimed by specialists and avidly consumed by general readers; he had received a knighthood and became a Companion of Honour in 1984; he was an honorary whirling dervish and was appointed Grand Orator of the Greek Orthodox Church. At the age of 97 he complained that “the only friend I now have who is older than me is the Queen Mother”; yet one would need to analyse the guest list for his 90th birthday party, to which he invited 400 friends, to be sure of the accuracy of that remark.