Is your child obsessed with Paw Patrol too?

From what I can tell Paw Patrol is rapidly invading the houses of almost all toddlers and preschoolers across the nation. Even though Paw Patrol airs on channel 9 and GO! each week, bub didn't discover it on TV, she found it via a suggested video on YouTube Kids and she's been infatuated ever since. And ever since then I've had the annoying catchy theme song ringing in my head. No idea what I'm talking about? Listen to this...

You'll have that in your head for weeks now. Welcome to my world.

As with any of bubs new obsessions it's imperative that I learn the characters names as quickly as possible to avoid her frustration when I don't understand what the hell she's talking about. Threenagers get very annoyed when you don't love their heroes as much as they do {especially when they're talking animated dogs}. Her favourites are Marshall, Rubble and Skye {so naturally they're the only ones I usually remember}.
Now that she's in love with Paw Patrol I've all of a sudden started noticing all the Paw Patrol things at the shops. Funny that. It's like when you get a red car, then see red cars e-v-e-r-y-w-h-e-r-e. It's a conspiracy I swear. Apparently there's a huuuge amount of Paw Patrol gear available to satisfy the little people, which is both good {hello Christmas presents} and slightly confusing. I'm a bit of a mean mum and have a rule that any new toys coming into this house need to be either wooden or educational, so that cancels out a lot toys at the shops, but I'm happy to report there's a really cool educational Paw Patrol toy that gets a massive tick of approval from me {much to bub's delight}. Meet Treat Time Marshall. 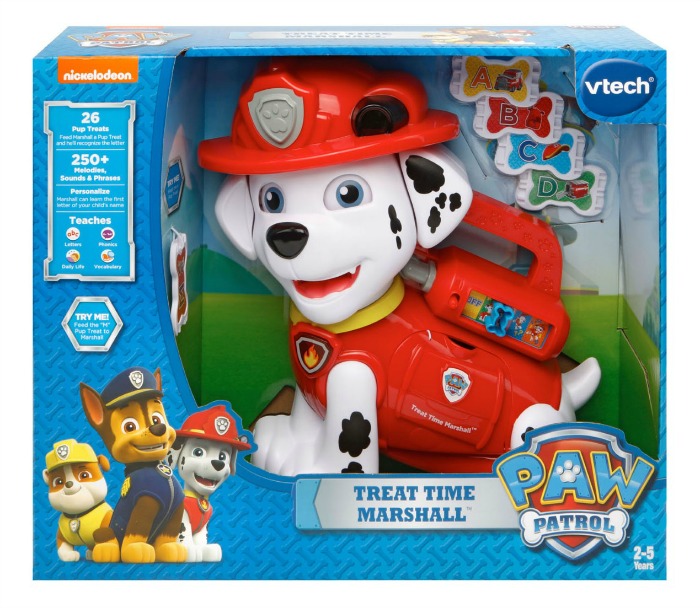 Treat Time Marshall helps kids learn the alphabet through games and songs as they feed him different pup treats. Each pup treat is a different letter and as he's fed Marshall responds with the letter, phonics, objects or songs depending on which mode he's in. Marshall has four modes including letter treats, learning rescue, search & rescue and music time.

In letter treats kids can put any pup treat into Marshall's mouth and he'll recognise the letter and repeat it back to them. In learning rescue Marshall identifies the letter and the picture on the pup treat and explains it. Search and rescue is a game where kids need to identify the right letter either by the letter or picture on the pup treat, if they get it wrong they're encouraged to try again. In music time kids can feed Marshall any pup treat and each one will trigger a different song.

Marshall's fire rescue badge also lights up and flashes as he talks and can be pressed for extra sayings. Marshall has over 250 melodies, sounds and phrases. He also moves his ears and opens and closes his eyes which bub loves. VTech have also incorporated storage into the toy with Marshall's pup pack safely storing all the pup treats when they're not being played with. The handle on his back also makes it really easy for kids to carry him around {bub takes him all over the house and outside}. 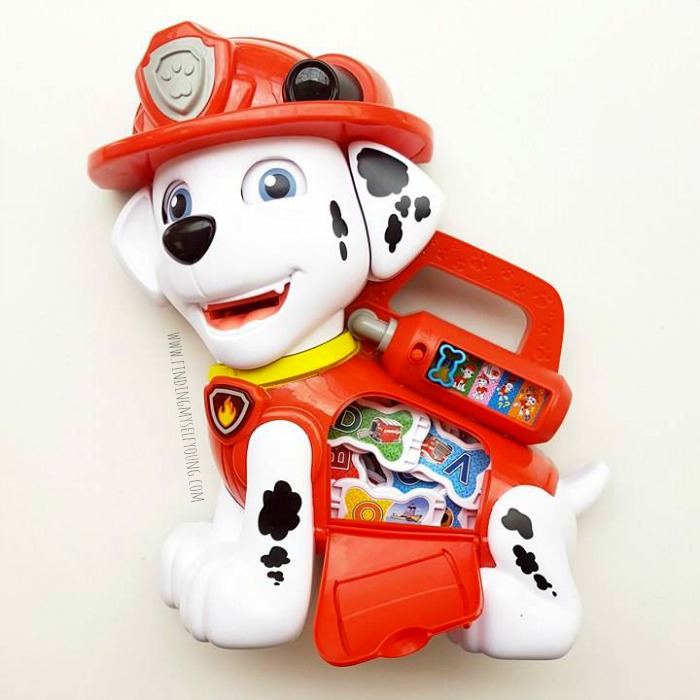 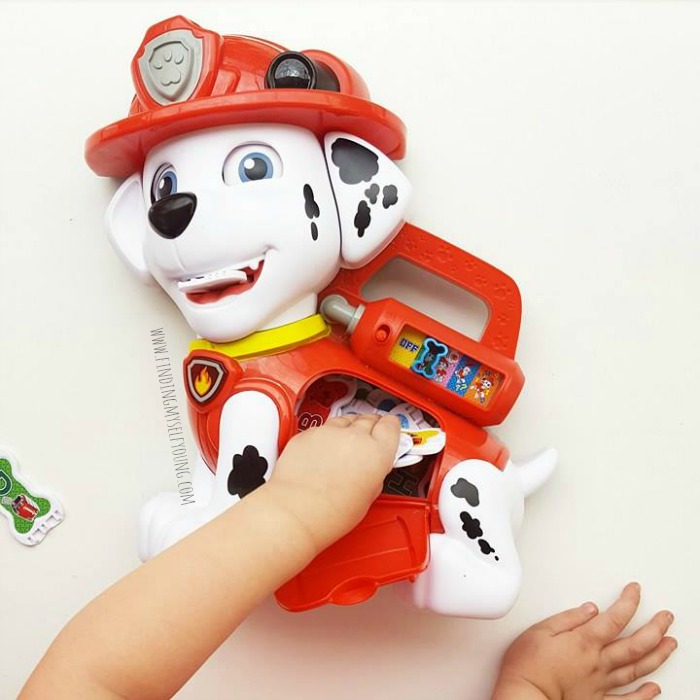 My only mild criticism of Marshall would be that the pup treats fit into his mouth quite snugly so it took bub a bit of time to get the hang of getting them in properly and out again. She's mastered it now {and it was good incidental fine motor skills practice}, but there were some initial tantrums, so just be prepared to help put them in and out at the beginning. The pup pack flap is also a little tricky to open, but that's actually a blessing in disguise because it means once I've packed it up she can't get them back out again and lose them.
Treat Time Marshall is a great toy to introduce letters and the alphabet to younger children and an engaging way to reinforce them to kids that already know the alphabet. Bub's known the alphabet for over a year now, but I still love to reinforce it during play all the time and the games Marshall plays with her are doing that in a fun and interactive way. She loves listening and singing along to the songs in the music mode and she really loves playing the search and rescue game where she has to listen to his clues and pick the right pup treat. In fact I'm pretty sure pup treat has become a regular part of her vocabulary now because she's always talking about Marshall and his pup treats. Even though this toy is plastic and I'd prefer wooden toys, its educational benefits far outweigh my aversion to plastic toys. I definitely feel its a worthwhile investment and I can see bub will be playing with it for the next couple of years. If you're looking for a Christmas gift for a Paw Patrol obsessed toddler or preschooler then definitely add Treat Time Marshall to your list.
For further information on Treat Time Marshall and other VTech products {including more Paw Patrol toys}, visit www.vtech.com.au, or check out the VTech news on Facebook and Instagram.
Disclosure - I was provided a Treat Time Marshall for the purpose of review. All opinions expressed are based on our experience with the product. I did not receive payment for this review.

Linking with Grace and Karin