Led Down the Garden Path 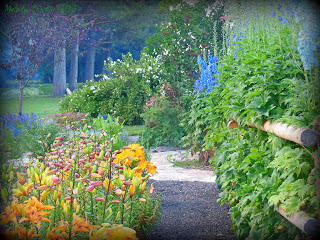 There are times when being led down the garden path isn't such a bad thing.

Somehow, garden paths and their transporting abilities have been dragged through the mud in our culture. To be led down the garden path has come to mean that you are being misguided. Set off course.

Perhaps it is the inherent characteristics of said paths that have helped the powers that be to develop the meaning behind the phrase. Garden paths can be - well, circuitous, frankly. They wind and gambol in twists and turns that Soap Opera plot writers would be proud to own. Rarely do they take the most direct route from point A to point B - oh, no. They meander. Wander aimlessly. I have built a variety of paths into my garden - and not one makes an attempt to be an efficient means to move goods or humans from one place to the other.

But in this case, being led down the garden path in the least business-like way possible has its advantages.

I might not be able to reach the roses with a watering can without circling the lily patch, or apply the pruning shears to the shrubs without winding around the peonies and stepping down a few steps and through the Japanese arch - but you know what? Those sinuous trails force me to smell the roses and rub [shoulders with] the shrubs. Slow down. Enjoy the journey. Breathe.

Efficiency isn't always the point. Sometimes the point is to take the long way home, wandering in wonder as you go. Sometimes pulling the bottom out of the bottom line frees you to fill your soul's tank instead of your wallet. And couldn't we all use a little fill-up?

You make known to me the path of life; you will fill me with joy in your presence, with eternal pleasures at your right hand. Psalm 16:11


God's economy is less concerned with efficiency than effectiveness, less wrapped up in saving time than saving people. The Israelites took 40 years to travel roughly 200 miles from Egypt to the Promised land. Moses was 80 before he got promoted from shepherd to leader. Jesus was born 700 years after Isaiah predicted His arrival.

Talk about a winding garden path.

The Bible is full of stories of ordinary people who took the 'long-cut' - and the world has been blessed by what they learned on their journeys. So don't worry if your path seems to be winding, friend. Slow down. Take the time to enjoy the scenery. Your life is less about getting to the end of the race than running the race well and finding joy on your journey.

Because if God is leading you down this garden path, there is something there He wants you to see. Learn. Experience.

And where He leads, you can't go wrong.