The Legendary &quot;Tomb of The White Elephant&quot; at Koh Ker

Prasat Thom pyramid standing 40 meters high without the ligham! At it's peak would have been 50 meters high! 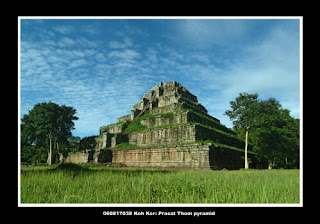 Builder of Koh ker is King Jayavarman 6th! Here's a portrait of the King on the last section showing the first three pictures!

In the Northern Cambodian province of Preah Vihear, the eponymous temple acquired some international fame with its listing in July 2008 as a UNESCO World Heritage Site and because of the border dispute with neighbouring Thailand around the area. However, another highly sacred place in the same province, which deserves some attention: the Koh Ker archaeological group, located 50 miles northeast of the Angkor complex, has long been inaccessible. A week ago, the Phnom Penh branch of the French Ecole Française d'Extrême-Orient (EFEO) launched a campaign to excavate this exceptional site.

The particularity of Koh Ker
To this day, only Henri Parmentier carried out an important study of Koh Ker, back at the beginning of last century and as part of research at the EFEO . Since then, a few archaeological soundings have been made by archaeologists from Apsara (the authority in charge of the site management) but no important excavation was carried out, thus leaving the site surrounded by mystery. The site used to be a temporary capital founded by Jayavarman IV – he later settled there in 921AD. That period of time was short but crucial in the history of the Khmer empire, the epicentre of which revolved around the Angkorian era in the present-day Siem Reap province.

A few sculptures from Koh Ker found their way to the Phnom Penh National Museum: here, a giant Garuda is on display at the entrance, welcoming visitors and there, a dancing Shiva is the evidence of a true revolution in Angkorian art.

To Eric Bourdonneau, a lecturer at the EFEO and a professor at the Phnom Penh Faculty of Archaeology, the site is a remarkable group for many reasons, whether it be in terms of architecture, with its mount-temple culminating at 115ft, a record height, or in terms of iconography, as it introduces “narrative scenes via the staging of sculpture in the round [three-dimension sculpture] when up until then, temple iconography was limited to a few divine representations displayed in the narrow frame of the lintels and pediments of the structure.

Having a small artificial hill talk…
In Koh Ker, non-believers might not detect the presence, in a straight line with the main temple (Prasat Thom) – the development of a plan controlled by lines had never been observed previously and conveyed the expansion of the divine here below –, of an artificial hill, named the “Tomb of the White Elephant” as a reference to a Khmer legend. The hill is indeed the centre of Eric Bourdonneau’s research and he intends, with two excavation campaigns, to find out about the secrets of that place: which part did the hill play in the layout of the ritual of Prasat Thom?

The historian and archaeologist, who specialised his research in the study of great sacred sites in Cambodia, seems to have his own theory, even though he wishes to remain cautious on the topic for the time being. What he can tell us at least, is that “the erecting of that hill – which is unique, or nearly unique in the field of archaeology relating to ancient Cambodia – is to be classified among the many innovations which come together with the ‘exploit’ of King Jayavarman IV, i.e. the transformation of the King’s place of activity (the capital and its Royal sanctuary) into a ‘natural’ sacred place, just like Wat Phou”. The latter, the EFEO expert details, is located on the western bank of the Mekong in the far South of Laos and was probably the most important of all sacred places in ancient Cambodia. The successive Kings were always intent on placing their reign under the protection of the divinities present in those places, which stood out due to their sacred worth.

“The Tomb of the White Elephant”: the legend
The tale, as it has been handed down throughout the centuries, is that of a white elephant, then King of all elephants. His daughter, Eric Bourdonneau recounts, “Had great beauty; she was descended from the gods and was taken away by the King of Cambodia who empowered her as first Queen in the Kingdom. The white elephant – well-identified in ethnological literature as both the sign and the source of Royal power – desperately tried to find his daughter but died of exhaustion before succeeding in weakening the compound of the Royal palace built by Jayavarman IV. A mausoleum was constructed nearby in his honour: this mausoleum is the hill located to the West of Prasat Thom”. And today, at the top of that hill, a small structure shelters the image of the white elephant.

Excavations will lead to more digging
The excavation campaign is part of a wider research project about the great sacred places of ancient Cambodia, and was started in 2007 by the Phnom Penh archaeological branch of the EFEO. It comes after more than a decade of efforts to constitute, under the direction of Bruno Bruguier, an inventory of the odd 3,000 sites and a series of archaeological maps covering the whole of Cambodia. “The idea is to study the different ways in which the divine is present”, Eric Bourdonneau explains. “And I call ‘sacred’ places where the divine was not erected by devout followers but appears in a natural way. Man only makes this presence more obvious, but it is already there.”

It would be bad manners to disturb a place that is somewhat “inhabited” and where cult is of high importance. On Tuesday February 17th, a ceremony was organised on the site of Koh Ker, as if to obtain consent to start digging and opening up the ground to divide it into two so-called diagnostic trenches. The ground was cleared of mines prior to the operation. The digging work required some thirty workers supervised by Eric Bourdonneau and an archeologist who is not part of the EFEO, and was carried out in collaboration with two young archeologists from Apsara. The first campaign should last for about 6 weeks and will be followed by a second digging mission during the next dry season, in March/April 2010.

Quoted from a thread of an AsiaFinest member by the sn: Intradaka1.