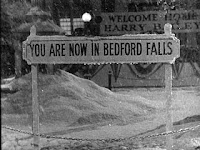 I've long said that I live in Bedford Falls.  It's the Christmas parade where you see someone you know every ten feet, the waitress at the diner who was your daughter's pre-school classroom aid fifteen years ago and remembers her name, the five-minute chats with the clerk at the gas station (and the way no one behind you gets annoyed--they may even join in), the way the children's librarian smiles when you come in with the grandkids and remembers when their mom graduated to young adult novels and a thousand other personal interactions.  It's the look of the place, too--the bright red wheel barrow in front of the hardware store downtown and the tiny post office and the storefronts run by people who live and work and shop and play in town.

But recently, when I started having some serious medical problems, I learned that my Bedford Falls was quite a bit wider than I'd realized.  (If you're thinking, "started?!  What do you mean started?", that's a fair question, but trust me on this--it's a lot more serious right now.)  Not being able to work for several weeks just at the time when I most need income has been rough. But it's also been a lesson in the beauty of humanity.

First, my high school best friend canceled a trip out of state so he could, basically, be close enough to drive me to the hospital if need be. So, instead of taking a vacation before he started a new job this week, he spent the week between Christmas and New Year's picking up my prescriptions and driving me to the grocery store and even bringing me toilet paper.

Then, some friends from the suburbs started talking behind my back, coordinating how they could help me out. And yes, that made me a little edgy, but also reminded me how fortunate I am to have such amazing people in my life.  One of them sent me a check that he insisted was a gift--when I objected, he said that if I insisted, I could send it back "when I got tired of it." And then these wonderful foods started appearing on my doorstep in decorative baskets, courtesy of a friend on the other end of the country.

I was already a little overwhelmed when an undauntable young friend on the other coast decided that it was time I "let the universe take care of me for a while" and started a fundraiser for me (and look at the nice things she said about me!)  And when she did, several of my past co-workers immediately chipped in to help.

My older daughter, already overwhelmed with three children, a full-time job and a husband going through medical issues himself, offered to come (225 miles) and pick up her sister if I had to go into the hospital.  I've received messages of support, prayers and offers of help from friends all over the country, some of whom I haven't seen in years. And today, a couple of college friends I've seen once in the past decade messaged to ask whether they could come and take me to lunch on Saturday.

I'm just saying "yes".  I've always been a big believer in mutual support and community only as long as I'm on the giving end; it's a bit uncomfortable when the tables are turned.  Perhaps everyone feels that way.  My wise teenager (who decorated the inside and outside of the house for Christmas by herself while I slept one day, after I mentioned that it made me kind of sad that I hadn't been able to do it) told me it doesn't work that way, that I'm on board with the idea or I'm not.  And I guess it's time to try out that view, since I really can't do a damned thing for myself at the moment regardless of my philosophy.  It's come as something of a surprise, though, how nice it is to have all this care and concern washing over me.