Life Lessons from the Roman Empire 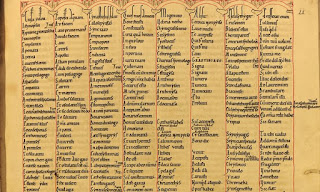 Professor Eleanor Dickey travelled around Europe to view the scraps of material that remain from ancient Latin school textbooks, or colloquia, which would have been used by young Greek speakers in the Roman empire learning Latin between the second and sixth centuries AD. The manuscripts, which Dickey has brought together and translated into English for the first time in her forthcoming book Learning Latin the Ancient Way: Latin Textbooks in the Ancient World, lay out everyday scenarios to help their readers get to grips with life in Latin. Subjects range from visiting the public baths to arriving at school late – and dealing with a sozzled close relative.

The oldest versions of the texts exist as fragments on papyri in Egypt, where the climate meant they survived. Due to the size of these fragments, Dickey had to refer to medieval manuscripts from across Europe. “They have been copied and copied over many centuries, with everyone introducing more mistakes, so they’re not that readable. As an editor, I had to find all the different manuscripts and try to work out what the mistakes were, so I could get to the original text.”

Dickey shows how the students had glossaries to help them get to grips with the new language, collecting together lists of words on useful subjects such as sacrifices (“exta” means entrails, “victimator” is a calf-slaughterer and “hariolus” is a soothsayer) and entertainment. “They’re definitely not the same sorts of words as we’d need,” said Dickey.