Living the Lessons of Srebrenica (Event at Wiener Library)

Tonight we attended the "Living the Lessons of Srebrenica" event at the Wiener Library for the Study of the Holocaust & Genocide in London. It was one of hundreds of events taking place across the UK this week to commemorate the Srebrenica genocide in July 1995. 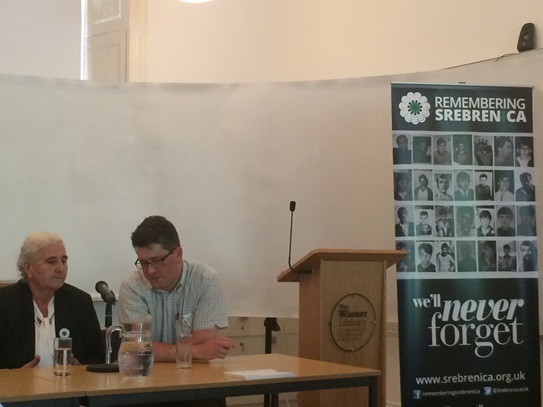 We first heard from Munira Subasic, president of Mothers of Srebrenica. Ms Subasic spoke through a translator but I'd like to record some of what she said.

On the continuing struggle to locate, identify and bury the remains of the victims of the Srebrenica genocide:

If a human being doesn't have a place to show where they lived, it doesn't show that they existed.

Ms Subasic talked about reaching out to other mothers' organisations but those who did it won't admit it, won't admit there was a genocide. Without admission, there can be no reconciliation.

"Many women who were abused are not able to have their own children or have relationships with men. A whole generation is disappearing".

Ms Subasic mentioned that the people who committed the crimes are still there, still abusing them.

"People say things are moving forward but Mothers of Srebrenica wish they had two lives: one for waiting and one for enjoying our lives".

When asked whether it would help if lower level perpetrators admitted their guilt, Ms Subasic explained that after the Holocaust, it was accepted that it happened. With Srebrenica, they are dealing with such total denial that no one is admitting it happened.

"They found only two bones of my son. It is very difficult to move on not knowing how he died. They dragged him from my arms".

"Those who committed genocide think they are national heroes. I am very happy with who I am today. I'd rather be a victim than a war criminal".

The next speaker was Dr Gill Wigglesworth who spoke about the lessons from the International Criminal Tribunal for the former Yugoslavia. She gave a fascinating overview of the legal situation and the different levels of proof required by the ICTY and ICJ when hearing genocide cases.

Dr Wigglesworth mentioned a different level of justice, restorative justice if you will, whereby Serbia or Croatia issues an apology for the crimes. Serbia has done so but that was only because they want EU membership whereas Republika Srpska have no such impetus and therefore there is very little chance of an acknowledgement or apology. 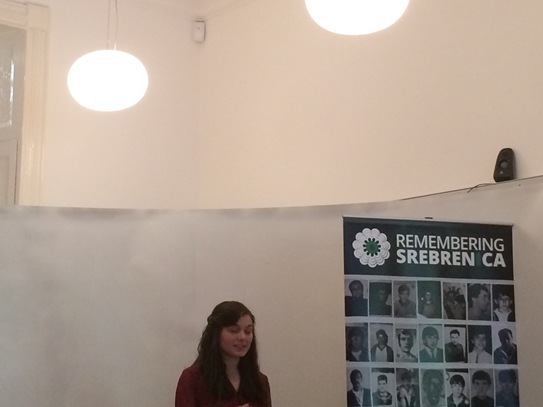 Alex Buskie of the United Nations Association UK spoke next on the responsibility to protect.

She examined how the United Nations learned from their mistakes in the 90s and 00s and how the Responsibility to Protect doctrine came to be adopted in 2005.

She mentioned that failures in the past stemmed from inattention, indifference and misjudgment or a perceived contradiction between the desire to protect a population vs the desire to protect a group of individuals. One concept that Ms Buskie reiterated several times was that the UN is a meeting of nation states, that they have no specific power as an organisation and they can only go so far as their members allow them.

Ms Buskie then took us through the three pillars of responsibility to protect and what we are protecting against (ethnic cleaning, genocide, war crimes and crimes against humanity)

Finally, Ms Buskie admitted that the UN is struggling and that the R2P has only recently been adopted. Having watched the UN reaction to Syria and the continued yet fruitless motions, I found this especially frustrating. Ms Buskie dis highlight how the security council should have briefings earlier on in future and how the organisation needs to adopt a company-wide commitment to upholding human rights but they have a long way to go.

Finally, Jasvir Singh of City Sikhs UK spoke about his own visit to Sarajevo and Srebrenica and how moving the experience was for him.

He spoke of the parallels to be drawn with the Sikh genocide and how friends and neighbours turned on each other. Mr Singh had an important message about how easily a situation can deteriorate and he hinted that such a situation is not impossible even in the UK. He highlighted the role of interfaith organisations in establishing commonality and ensuring that communities can maintain their faith while living in peace with those of other faiths.

The event was then wound up with a very interesting discussion. I was most impressed with how we tackled some controversial topics with respect and consideration. 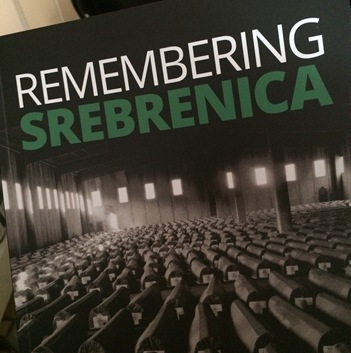