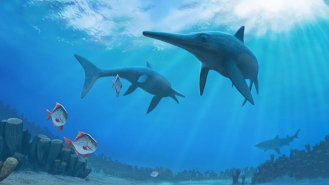 We're learning more about why ichthyosaurs died out. Climate change was almost certainly involved: but it wasn't our fault, and I'll get back to that.

Long before the first not-quite-an-ichthyosaur made the transition from land back to Earth's ocean, a tiny little fungus came ashore and started turning rock into soil.

First, though, my usual spiel about why I'm not upset that Earth isn't flat, Adam and Eve aren't German, and poetry isn't science. Also:

Thinking is Not a Sin 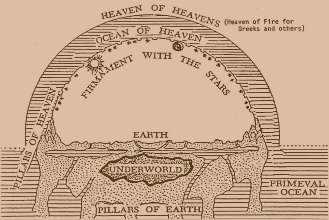 I could be a Christian, following our Lord, and believe that we live on a flatish plate.

But that level of ignorance of what we've learned in the last two dozen or so centuries is not required — or encouraged.

Thinking isn't a sin. Not for Catholics.

Since I believe that God made the universe and the things of faith, I must also believe that honest research cannot contradict faith. (Catechism, 159)


"The question about the origins of the world and of man has been the object of many scientific studies which have splendidly enriched our knowledge of the age and dimensions of the cosmos, the development of life-forms and the appearance of man. These discoveries invite us to even greater admiration for the greatness of the Creator, prompting us to give him thanks for all his works and for the understanding and wisdom he gives to scholars and researchers"
(Catechism, 283) [emphasis mine]

Wondering how things began and where we're headed is part of being human. Learning about God's universe is what we're supposed to do. (Catechism, 282-289, 2293)

Over the last few centuries, we've learned that our world is a great deal bigger and older than some of us thought. I'm okay with that.

Even if I wasn't, it wouldn't make much difference. I figure part of my job is admiring God's creation: not telling the Almighty how it should have been designed. God's God, I'm not — and I'm also okay with that. 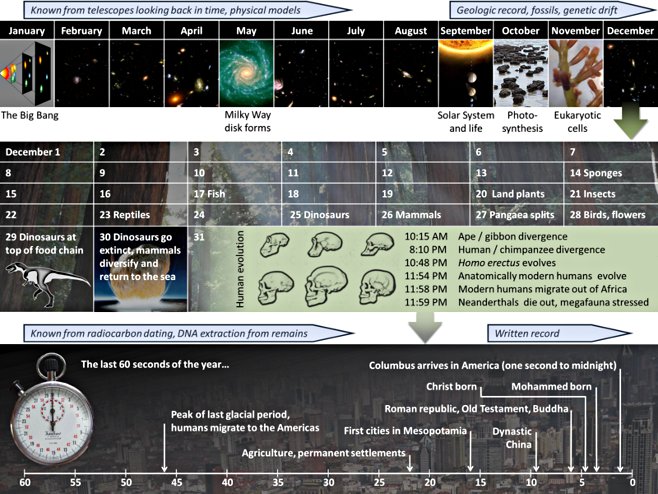 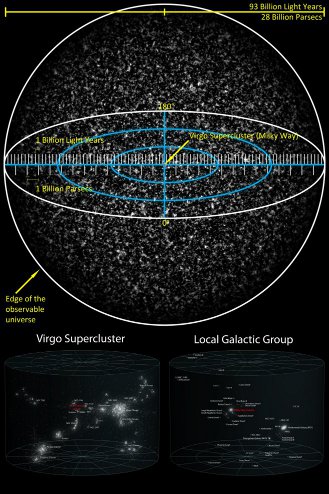 I'm confident that God could have created a tidy little universe, a few thousand miles across: and one that had always been pretty much the same, ever since it started a few thousand years ago.

We've been learning that the universe we're in isn't even close to being that tidy, new, or unchanging.

Again, I'm okay with that.

This world is in a state of journeying — in statu viae — toward an ultimate perfection. (Catechism, 302-305)

I'm certainly not worried that the universe is too big for God to handle.

The way I see it, what we're learning about the scale of this universe adds emphasis to verses like these:


"4 Indeed, before you the whole universe is as a grain from a balance, or a drop of morning dew come down upon the earth.

"But you have mercy on all, because you can do all things; and you overlook the sins of men that they may repent.

"For you love all things that are and loathe nothing that you have made; for what you hated, you would not have fashioned.

One more thing, about us:


"When I see your heavens, the work of your fingers, the moon and stars that you set in place -

"4What are humans that you are mindful of them, mere mortals that you care for them?

"5Yet you have made them little less than a god, crowned them with glory and honor."
(Psalms 8:4-6)

Our dominion over this world isn't ownership: we're more like stewards or shop foremen, with the authority and responsibilities that go with the job. I've said that before. Often. (March 3, 2016; February 26, 2016; February 20, 2015)

1. Ichthyosaurs in a Changing World 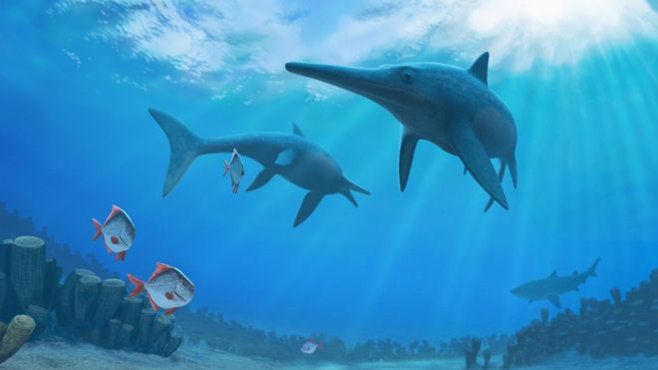 (From Andrey Atuchin, via BBC News, used w/o permission.)
("The ichthyosaurs swam alongside early sharks and bony-finned fishes"
(BBC News))

"A dramatic shift in the Earth's climate killed off marine reptiles that swam at the time of the dinosaurs, according to a new study.

"About 100 million years ago, the oceans warmed up, polar ice melted and sea levels rose to unprecedented heights.

"Scientists say the ichthyosaurs, or 'fish lizards', could not adapt to the new conditions, spelling their demise....

"...Evidence suggests their extinction about 100 million years ago was driven by intense climate change and their inability to adapt to the changing world...." 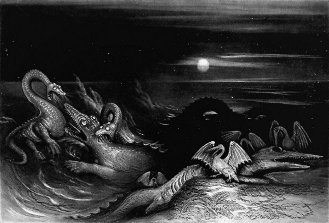 We've learned a great deal since English geologist Thomas Hawkins wrote "The Book of the Great Sea-Dragons, Ichthyosauri and Plesiosauri" — and are discovering that we have a great deal left to learn. (May 29, 2015; November 21, 2014)

Ichthyosaurs weren't the only critters affected by the Cenomanian-Turonian boundary event — the second anoxic extinction event during the Cretaceous period.

That's a fancy way of saying that Earth's ocean ran seriously low on oxygen 91,500,000 years back, give or take a few million.

Two scientists say they found a few bits of an ichthyosaur from later in the Cretaceous, but the critters were on their way out:

We're not quite sure what happened, but volcanoes had been working overtime some 500,000 years earlier, adding rock to what's now the Indian and Pacific Ocean floor — and carbon dioxide to Earth's atmosphere.

More about that sort of thing, from Wikipedia: 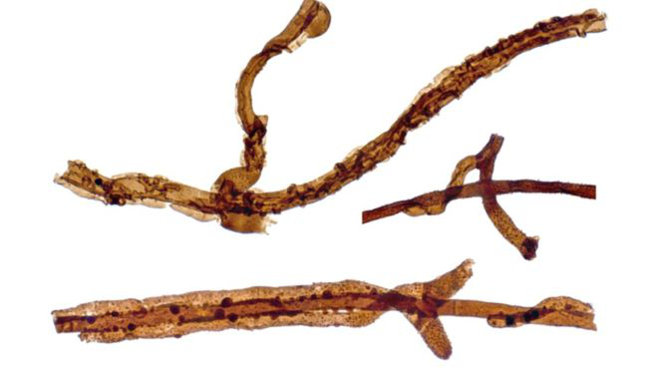 (From Martin Smith, via BBC News, used w/o permission.)
("Filaments of the ancient fungus"
(BBC News))

"It is smaller than a human hair, resembles a mushroom, and is thought to be the earliest fossil of a land-dwelling organism.

"The fungus, which dates back 440 million years, spent its life under the ground rotting down matter.

"Even the scientist who analysed it - Dr Martin Smith - admits it is a 'humble little fungus'.

"But the pioneer, known as Tortotubus, could help explain how early life colonised the rocky barren Earth...."

Tortotubus showed up late in the Ordovican period, survived the Ordovician-Silurian extinction events some 447,000,000 to 443 ,000,000 years back, and lasted until the Givetian stage of the Middle Devonian — don't bother trying to remember those names. Hardly anybody talks about them these days.

The Ordovician-Silurian extinction events made what some folks called the 'big five' extinction events, a somewhat-arbitrary list of hard times for critters that aren't like scorpions, cockroaches, rats or — I think — us. (April 24, 2015)

Back to Helen Briggs' article. 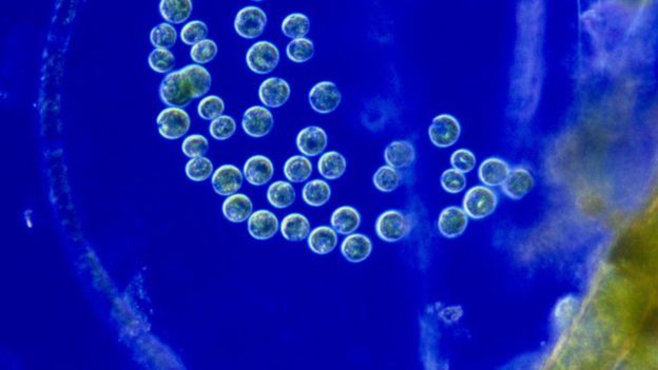 
"...Most scientists agree that life moved from the sea to the land between 500 and 450 million years ago.

"But in order for plants and animals to gain a foothold on terra firma there needed to be nutrients and soil to support them.

"Fungi kick-started this process, by getting nitrogen and oxygen into the rudimentary soil....

"...Dr Smith says there were probably bacteria and algae already on land - but these are rarely preserved in the fossil record.

"This makes Tortotubus probably the oldest fossil of a land-dwelling organism yet to be found...."
(Helen Briggs, BBC News)

Drying out isn't the only danger for critters living on land: not since what I called The Great Dioxygen Disaster 2,500,000,000 years back, give or take.

Critters like us use oxygen to 'burn' food, getting whacking great quantities of energy. Some anaerobic organisms survived the Great Oxidation Event: others didn't. (December 4, 2015; June 27, 2014)

I could prattle on about fungi, Eadicaran whatsits, and convergent evolution. But it's late Thursday evening, I need sleep, and you probably remember what I said about them before.