Although I could catch a minibus from Fanling station to my home—and as the holder of a senior Octopus card it would cost me only HK$2 (20p; ¢26)—I’m more likely to walk. After all, it’s only 3km. And, in any case, there is just one minibus every 30 minutes during off-peak times, so if I have to wait more than 15 minutes for the next one, I will beat it home.

However, if I’m not subject to any time constraints, which is most of the time, I usually take a longer route, because there are a lot of points of interest along the way. I start by following the road north, parallel to the railway and alongside a dedicated cycle track. There are such cycle tracks leading from the station to both north and south, but this one comes to an abrupt end, meaning that cyclists are forced to ride on the sidewalk or the wrong way on a dual carriageway if they wish to continue: 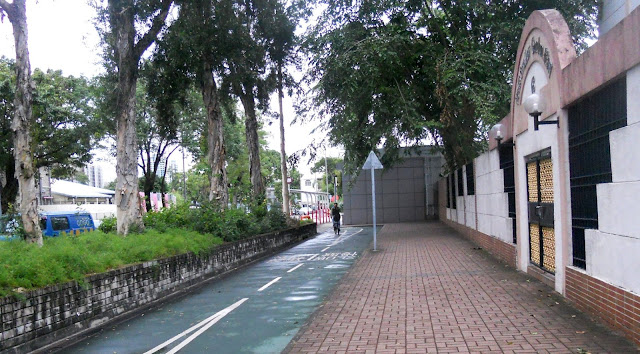 Fortunately, it is possible within a very short distance to turn into a side road, which leads past the Tsz Tak Study Hall: 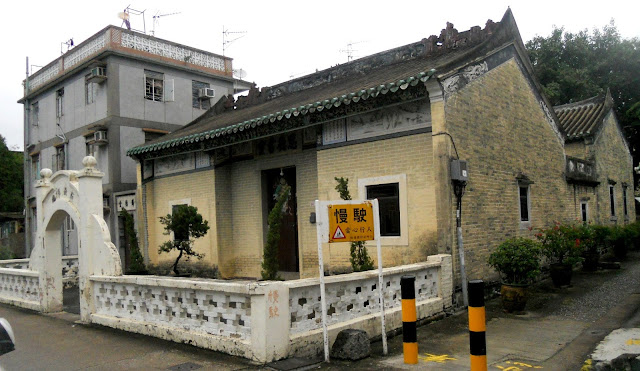 This hall was built in 1846, and it functioned for many years as a school for local village children. It is also reputed to double as an ancestral hall for the Pang clan, although I’ve never seen it open and therefore cannot confirm this statement.

A short distance further on, I come to the rear entrance of Fanling Wai. Two women can be seen approaching this entrance in the following photograph. 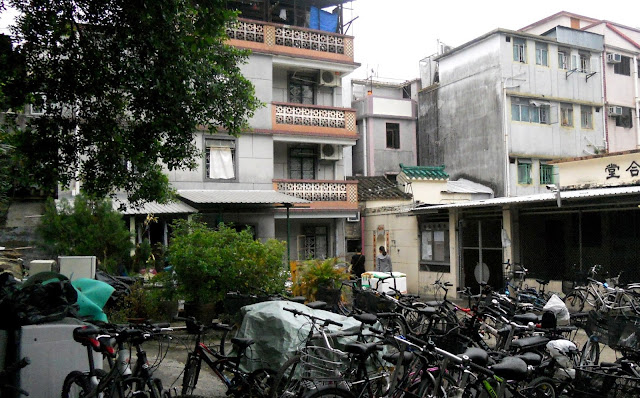 Wai is the Cantonese word for ‘enclosure’, which generally implies a walled village. In this case, however, almost nothing of the original walls survives. The following photo shows the main ‘street’ of the wai, which is narrow, dark and gloomy: 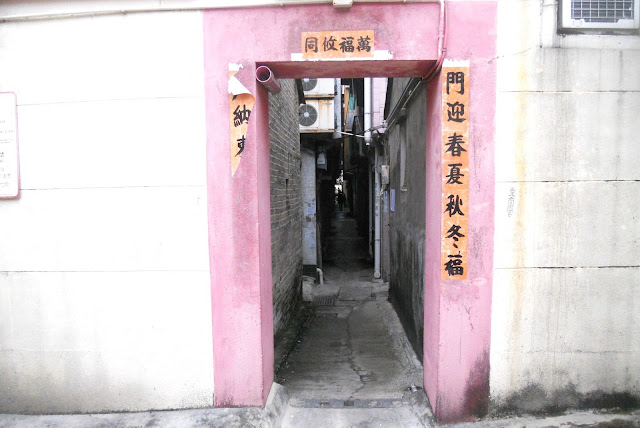 But if you thought the main through route was dark and narrow, then check out the side alleys. So little light reaches the ground level here that when I tried to take a photo, the flash on my camera kicked in automatically: 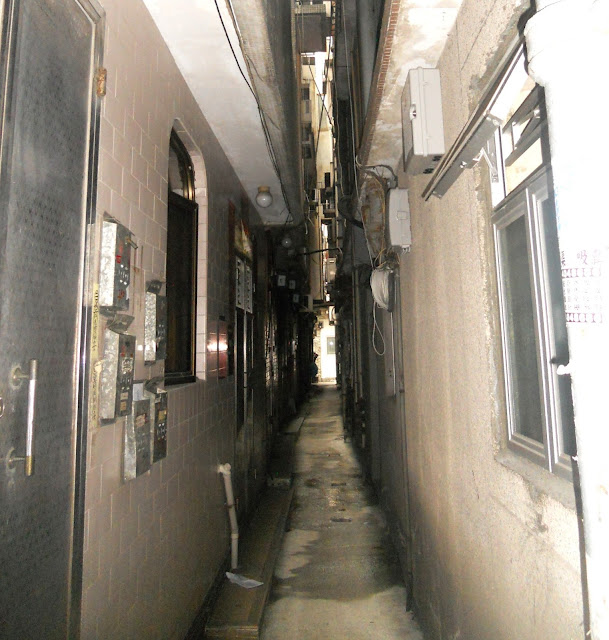 The following photo shows the ‘front’ of the wai, with one of the original corner guard towers on the left and the main entrance to the right. 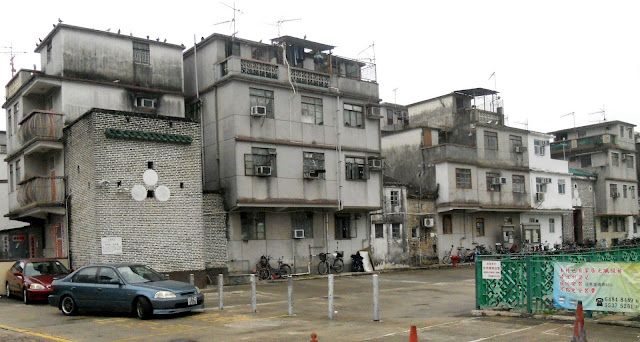 The three white circles are said to enhance the fung shui of the wai, but regular readers will know that I regard fung shui as a system for parting the gullible from their money. However, if there is anything in the idea, then the fung shui of the houses in Fanling Wai must be absolutely abysmal. Incidentally, village houses are restricted by law to three storeys, but as these photos show, the law is widely ignored.

A little further on, my route home passes the Pang Ancestral Hall, which was moved to its present location in 1846 to improve its fung shui and rebuilt in 1884. I’ve never seen this building open either, and it is almost impossible to get a good photo, because of the cars parked in front: 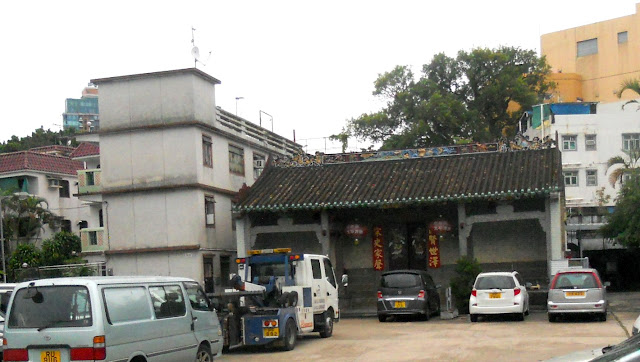 The next landmark, on the far side of the only main road I need to cross on the level, is Sam Sheung Temple. I have no information on when this temple was built, but despite being cut off by a main road, it is clearly associated with the Pang clan and Fanling Wai. 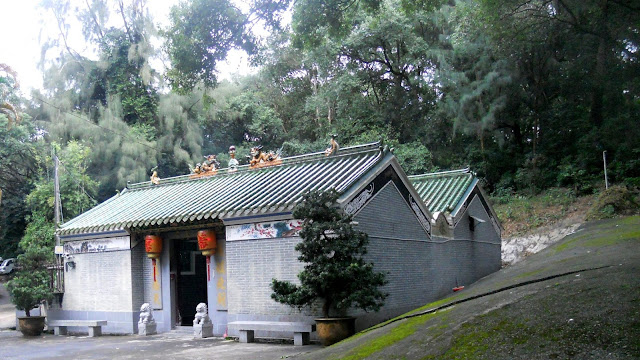 Note the dragons on the roof tree, and towards the gable ends, two fish. The significance of fish in Chinese culture stems from the fact that the Chinese words for ‘longevity’ and for ‘fish’ sound the same.

The temple is at the top of a slope down towards a typical pedestrian/cyclist underpass. I’ve included the following photo as a kind of salutary warning against being impulsive, which is possibly my biggest fault: 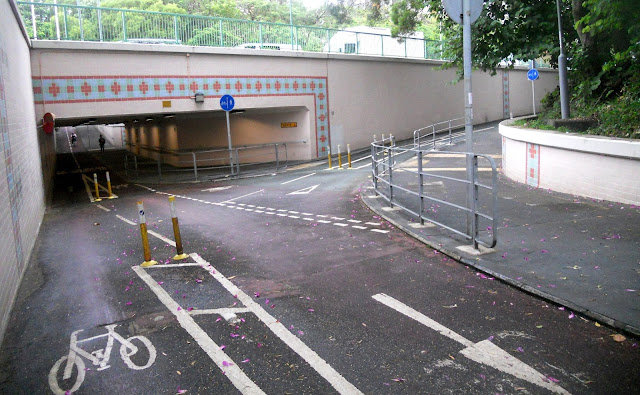 I only rarely come this way on a bike, but last winter, because of unusual circumstances, it was necessary for me to ride through the subway and turn left. Knowing that once I’d turned the corner I would have a slope to contend with, I didn’t slow down for the bend. Unfortunately, I took too tight a line around the bend, and my handlebar smacked into the metal railing, throwing me across the track. The really silly thing is that I could have managed this slope in top gear from a standing start, but I was trying to be too clever.

Anyway, once I’ve used the subway to cross to the other side of a busy road, it isn’t long before I can turn off through a squatter area: 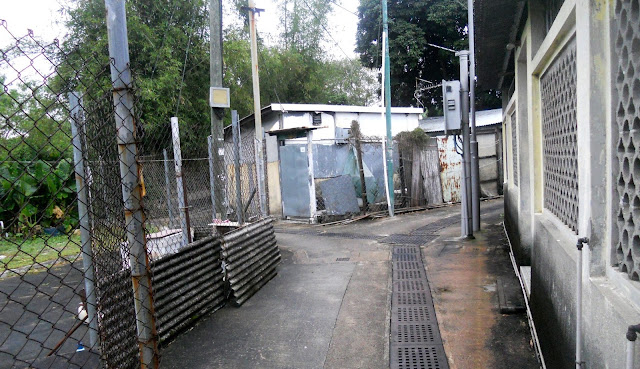 There are several different paths that I could take through this section, but if I turn left at this junction, I will soon reach the local river: 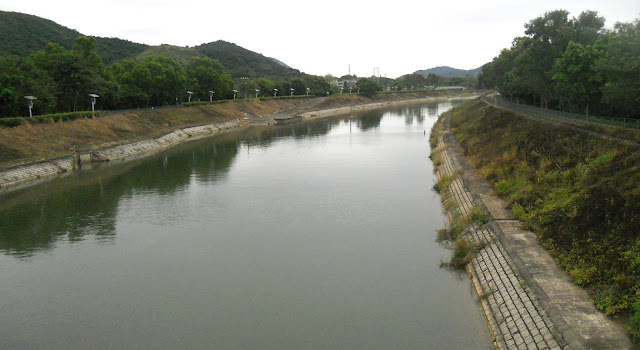 The previous photo was taken from a footbridge across the river, from where my goal is a road bridge in the distance. I get there by following the Drainage Services access road in the final photograph: 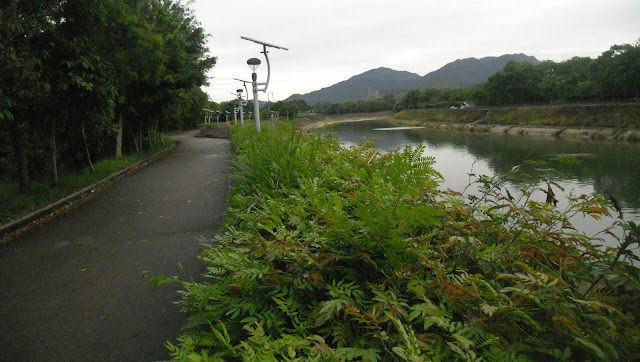 And that leads me home.