Esmeralda, the old boiler, is happily chugging away in the corner heating the place magnificently as she is supposed to do.  The heat is required as today is somewhat chilly,the clear skies allowing both sunshine and frostbite to entertain us.  Esmeralda is powered by British gas, one of the overpriced privatised energy companies that rip us off, especially during wintertime.  The fact that a lot of publicity has gone into encouraging people, me among them, to change gas companies has caused British gas and others to think about means of keeping hold of the customer without lowering their profits.  One such idea is the free gifts and prize draw offerings that no-one known to us ever wins.  The prizes may be great and the rewards tempting but they do not drop through our door.
On the other hand loyalty cards at supermarkets and elsewhere have apparently been failing to encourage folks to remain with one company, people preferring to shop around.  However I am happy to make use of what rewards I get from Sainsburys, especially as it is just up the road two minutes away.
Now get this, last December, on the official email, British Gas claimed I had been awarded an enormous number of 'Nectar points,' the system used by Sainsburys as loyalty points.  naturally I thought this a scam and yet my name was on the email, it was the official one I had signed up for, wasn't it...?  They informed me my points would be added in 10 days or so, and with Christmas in the way I put this aside and waited to check if it was real.  Indeed it turns out it was real and once I checked with Nectar themselves I had been given a great temptation not to change from British Gas to anyone cheaper!
I was amazed, this has never happened to me or anyone close to me, friend or foe.  There were several thousand points thus allowing me to spend them on things of value, like meat!  There is a superstore 30 minutes away on the bus and as our local Sainsburys store is small in comparison I headed to the big one today to see what was available. 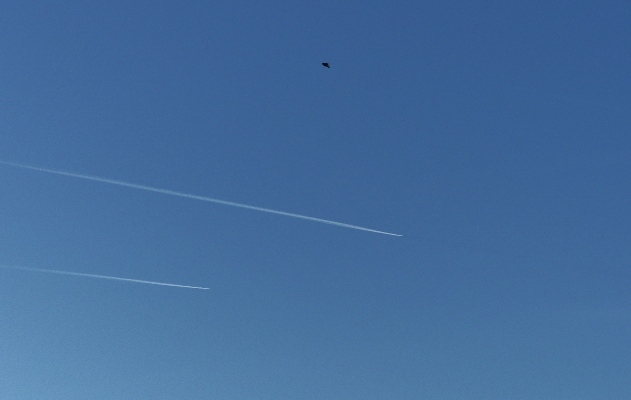 The advantage of larger stores comes from the offering of a wider range of household, technological and fashion goods smaller stores do not have the room for, thus it was here where vast areas were covered in ten times the amount of goods in comparison to what I'm used to.  The disadvantage, other than the ignorance of customers each and everyone of whom considered they could barge into me with their trolleys, it is near the big town you see and manners are less used there, the disadvantage to me was the thought that I did not require any of the tempting technological marvels or indeed the fashion, such as it was.  Milk, bread and sausage rolls for lunch did not seem an adequate response to the prize.  However my little camera is in trouble and requires fixing so I bought a cheap Nikon A10 to stick in my pocket for when the real camera is too bulky.  This satisfied my need for 'shiny things' and I went to pay.
Here we begin to slow down.  The lass was very friendly, helpful and efficient but indicated my card was logged into the local store, not the big one.  This meant her trailing me over to the Customer Services where a friendly and efficient young man (I was never like this when I worked) took me through the operation required.  He phoned Nectar where I had to confirm I was me, sensibly enough I think, and when that was OK the operation was complete and I strolled into the sunshine with my bag.
I was impressed by the staff, usually at the local store they are quite good, occasionally one can be a reason for being irked but in the whole they are acceptable, here however the people I dealt with went one better.  Shame there was little I wished for, mind you I will buy meat on Saturday at the local, that will shock them!  "What no reduced price mince this time...?" 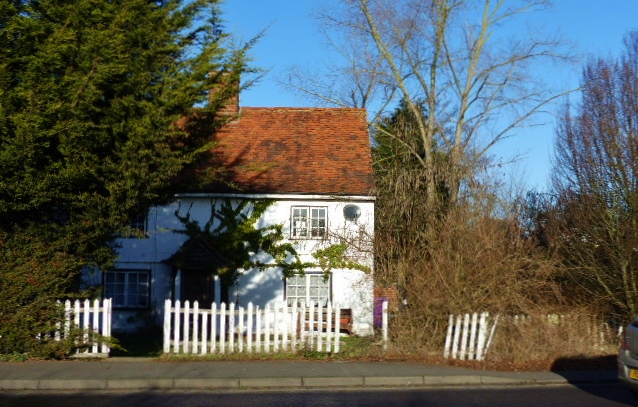 That summed up the day as by the time I got home I lost interest in anything else but eating and sleeping.  The bus took ages to get back as while the roads were clear going out there were numerous hold ups coming back.  Holes in the road in several places, detours and lots of traffic on narrow roads.  Still I am grateful for the bus pass which might be used tomorrow with books in mind...
The house looks neat but it is quite run down.  I am not sure if it is part of the restaurant next door hidden by the hedge or what but I do know that what once was a nice wee home on the old Roman Road (actually going back long before the Romans improved it) this house now has billions of vehicles of all sizes outside his door all day and all night.  The roundabout to the right carries traffic in several directions and behind me stands the shopping centre swarming with folks improving their houses one way or another.  The traffic round here makes my ears bleed.  I am clearly now used to small town life even if the main road is outside my window. 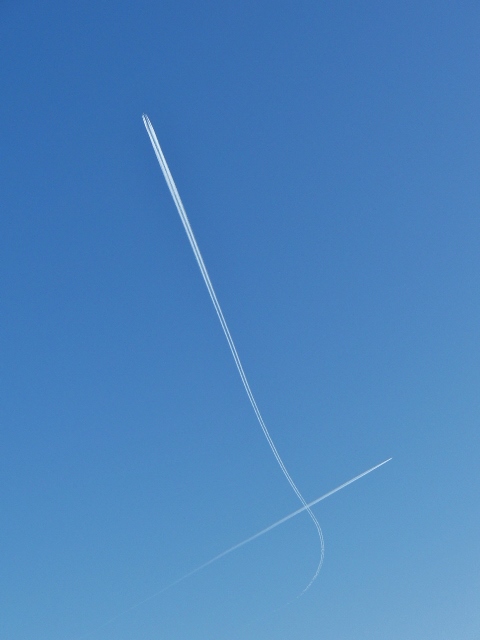 High above several vapour trails scratched the sky.  here we see what I think may be one craft at 35,000 feet passing overhead towards the Americas while the other moves into the holding pattern for landing.  One possibly heads towards, New York or Montreal the other looks towards Stansted or Luton airports.  I know which one I would rather be on.
Camulodunum is of course home to the army and while the old barracks have been knocked down and replaced with new housing, only the old church remains in place, there is still a firing range not far down the road.  To the right of these vapour trails I noted a third which suddenly rose into the air turned over and headed downwards then vanished into the distance.  This was too far away to see clearly but no passenger liner behaves like this unless it is crashing!  Too fast for the 'Apache helicopters' we often see here I have no idea what was going on unless it was part of the army maneuvers, still a bit strange mind.