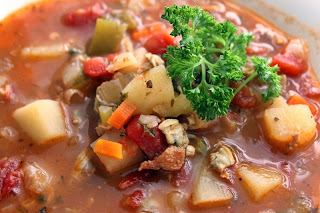 I recently lost my step-father to a massive heart attack. The long and short is that we knew he had metastatic cancer but he fell and needed stitches so was transported to the ER via ambulance (nobody saw him fall and at the age of 85 it was precautionary). Once there, it was discovered that he'd had a rather large heart attack. Not quite two days later that heart attack was the cause of his death. Most of us were able to be with him when he passed and although he was not conscious I'm hoping he felt our presence with him.

He was very particular about his food, having been raised by English parents who moved here to the U.S. in the early 1900s. Mostly he was a "meat and potatoes" guy and there wasn't much he ate that fell outside the boundaries of that. Manhattan Clam Chowder was one food that he loved. Not New England as one would expect from a man with a blander palate, but the 'red kind'.

This is so close to the one he ate that there would be no telling it didn't come from his favorite soup maker - only it's a bit better ;) I know he'd enjoy it if he were here to do so.

In a large pot bring 2 cups of water to a boil and add clams. Cover tightly and cook for 5 minutes. Stir clams and recover. Cook 5 to 10 minutes longer or until most of the clams are opened.

Put clams to a large bowl and strain the broth through a fine-meshed sieve or cheesecloth into a large bowl. You need about 8 cups of broth, if not add chicken stock or bottled clam juice to make enough. Once clams are cool, remove them from their shells and chop.

***If using canned clams, make sure there are 8 cups of liquid with the clams - bottled clam juice, chicken stock or juice from the canned clams should be used to make up the 8 cups.

In a large heavy soup pot add bacon and cook until crisp. Pour off all fat except 4 tablespoons and crumble bacon - set bacon aside.

Add onions, celery, pepper and carrots and cook until vegetables are softened - about 10 minutes. Do not brown.

Add garlic, bay leaf, oregano and thyme and stir. Add broth and bring to a boil. Add potatoes and cover. Reduce heat to a simmer and cook until potatoes are tender - about 15-20 minutes.

Add tomatoes and continue to cook for another 1o minutes.

Remove the pot from the heat and chopped clams, crumbled bacon and parsley and season with pepper and salt, if needed. Let chowder stand, covered for an hour then reheat gently before serving.