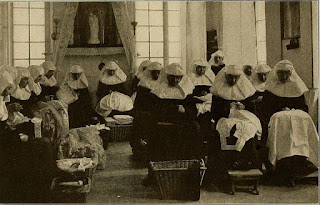 Beguines were a religious movement of women who weren’t wives but also weren’t fully ordained in a religious order. There is a long history of Christian mystics, and they occupied a twilight zone in which they could move between the secular and religious worlds. They didn’t need to bear the burden of married life, but also weren’t forced to seclude themselves as nuns did, leading active and economically useful lives as single women.

The movement founds its origin in 12th century when mulieres religiosae, holy women, began grouping together in cities of present day Belgium, the Netherlands, Germany and Northern France. Here they lived in voluntary poverty and preached sexual abstinence, while living lives in the service of the poor and marginalized. One such holy woman, the 23-year old widow Juetta of Huy, left her family in the city of Liege around 1181 to serve lepers. She then spent the last 36-years of her life immured as an anchorite.

Around 1230 these holy women had started to be called “beguines”, a term that was most likely initially used pejoratively, but whose original meaning is lost to history. Some of these communities formed separate, walled communities called beguinages, located just outside the city walls.