I did a presentation in Arizona this weekend for First Pitch Arizona, an event at the Arizona Fall League hosted by BaseballHQ. The presentation served as an introduction to spin rates and exit velocity and so on. I examined the new stat from our friends at Statcast — Barrels — and how Michael Conforto does well by that stat, which attempts to combine exit velocity and launch angles to credit players who make dangerous contact. On the way out, someone asked me, basically: “So if he’s good at barreling the ball, what happened last year? What went wrong on those barrels?” There’s an easy answer and a hard answer.

The easy answer is that even players who are good at barreling the ball don’t barrel it all that often. Conforto is in the top 75 when it comes to barreling, and he barreled only about 11% of his batted balls this year. The elite guys this year — Gary Sanchez, Khris Davis, Nelson Cruz, Chris Carter and Mark Trumbo — barreled the ball around 18% of the time when they put the ball in play. Even among that group, there’s another 80% of batted balls unaccounted for.

That mirrors the difference in home-run rate, sort of. The top two in homers — you might recognize Trumbo and Davis — have a 7% home-run rate, about double that of the 75th guy, Andrew McCutchen (3.5%). But in the gaps between them, you still find interesting players. Conforto, for example, would have been 84th in home-run rate had he qualified, a little worse than (but still comparable to) his barreling rate.

He’s been unlucky, maybe. Barreled balls produced a .822 batting average and a 2.386 slugging percentage as a group, while Conforto hit .714 with a 2.143 slugging percentage on his barrels, which was third worst among players with 20 barrels in play.

Unluckiest Barrelers
SOURCE: Statcast
Barrels, explained here, are balls in play with combined launch angles and exit velocities that have traditionally produced a minimum of a .500 batting average and a 1.500 slugging percentage in the past. The league’s barrels have had a 2.386 slugging percentage this year.

It’s sort of amazing to consider that a man with a slugging percentage over 2.000 might have been unlucky on that group of balls in play, but then you consider that the leader here, Jedd Gyorko, averaged 3.7 bases per barreled ball in play. Basically a homer per barrel. Conforto, meanwhile, was putting up doubles.

You could say that not all barrels are created equal and be done with it. Gyorko averaged a 27.7-degree launch angle and 103.8 mph. Conforto, by comparison, was a bit more line-drivey, with a 25.5-degree average angle and 104.9 mph exit velocity. Still, for the difference between the guy with the most bases per barrel in play and the guy with the third least, it doesn’t seem like a big deal.

Maybe a look at a few of Conforto’s barreled outs will tell us more.

Here he is with an oppo drive against Corey Kluber early in the season.

Again, abother oppo drive, but this time off Felipe Lopez at home.

Here’s the pulled ball, a frozen rope off of Jose Fernandez RIP.

That last one seems like just a good defensive play. Probably not much to be learned there.

The other ones raise at least a couple questions, though. Like: does horizontal spray angle mean anything? And: are opposite-field barrels less great than pulled barrels, even with equal launch angles and velocity? It turns out… maybe!

With the help of Sean Dolinar, who ran a LOESS curve on 2015’s batted-ball statistics to see if exit velocity was higher in the corners than down the middle, it looks like we can say that batters make (slightly) harder contact in the pull angles than they do up the middle. If we combine that with a visual that relates exit velocity and spray angle to batted-ball distance, a bit of a picture emerges: the ball goes further, and harder, down the lines. (Zero is straight through to center field.) 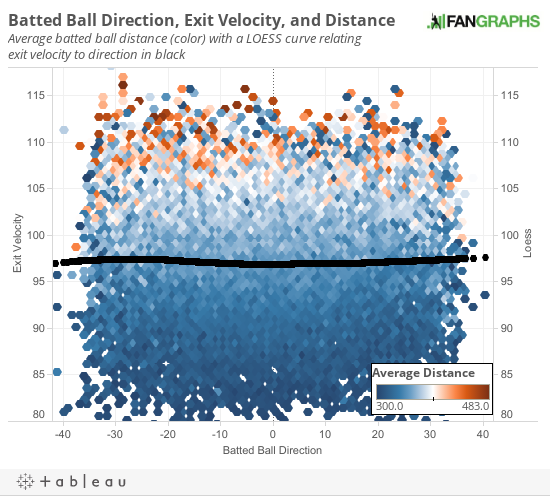 Another, much tougher thing to see on those balls is the batted-ball spin. We know from Alan Nathan that batted-ball spin can have some impact on the ball, so Dolinar and I tried a multiple linear regression to relate air density, launch angle, exit velocity, batted-ball direction, and batted-ball spin to actual distance. The results looked significant (p value <2.2e-16) and showed improvement when batted ball spin and direction were included (.484 r-squared). Here’s the equation:

Basically, an extra 100 rpm of spin on the batted ball is worth about a degree of launch angle. An approach that started with physics, like those that Nathan espouses, are probably better than a statistics-only approach because they model the actual ball in flight and use science to build the model. My main takeaway from this is that spin and direction add important information if our goal is to predict batted-ball distance.

Barrels are awesome, but there are a few factors that may influence the outcomes of even those best of batted balls. The direction in which the hitter sprays the ball and the spin he imparts on the ball: those things may be important.

The problem is that these factors may not be under the control of the hitter. Batted-ball spin is a question of millimeters on the ball, and the direction of the ball is profoundly influenced by the location of the pitch.

So, in the end, barreling the ball is great. If Conforto continues to barrel the ball as he has, he should have better outcomes on those in the future. Some barrels may be slightly better than others, but having a process that leads to barrels is always a good thing for a power hitter.