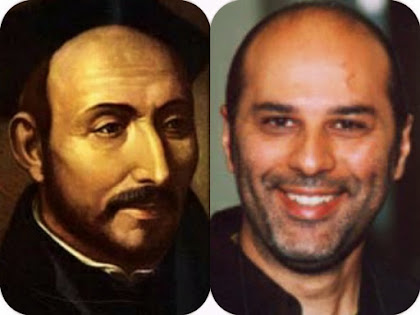 I think Michael Tsarion and Ignatius of Loyola look similar within something familiar is noticed by unspoken words. Been wanting to blog this post for a while now but it never felt right until this moment. It seems like I push mind buttons when I say, I like controversial people from the past and in the now. Observing the conspiracy movement, it seems to have the motive to hate everyone. However, are moments within have to look at people to go beyond the human shell and look deep within a person to see the many layers of a being. This could be considered a controversial post because many people like or dislike Michael Tsarion and Ignatius of Loyola. Even more shocking is that I like them both. The common element of greatness-taking place that is felt beyond what is already known to bring the past puzzle into knowledgeable focus.


Michael Tsarion is a Genius with Handsomely Attractive Mind of Knowledge

Been a fan of Michael Tsarion for many years because always opens the mind to the teachers and subjects from the past. Do I agree with everything he says no but that goes for everyone I listen to online within discernment. I always found him as handsomely attractive because of the soul knowledge within something from beyond the earth encyclopedia. Also for the fact that he has been at his mission for a long time is devotion. Still going strong it says so much about the heart within the man that cares about what he is doing and it is bigger than words in a post.

Researching Ignatius of Loyola and I found him as this interesting person to research within wanting to know more. I looked at all angles of this person from the occult, conspiracy to the mainstream perceptions. He was the founder of the Jesuit Order. To go from a soldier to create this concept into something real is amazing and it is still taking place now. Ignatius of Loyola in a sense had a genius mind and what he created is admirable, whether it is seen as good or bad.


- Ignatius of Loyola Envisioned the Jesuit Order and Original Intention

Get the strong feeling what Ignatius of Loyola envisioned for the Jesuit Order is not what it is now. However, nothing is what it was like then and now for any groups within a similar nature in our society of seeing the misconceptions on everything. Example the founders of Christianity, Freemasonry, and even Rosicrucianism. Are nothing like it was within its original intention of was intended to be into now. Although, all religious beliefs are screwed up in a sense, because of the subliminal illusion away from the bigger soul picture of true spirituality is love being you.


Is Michael Tsarion and Ignatius of Loyola within Same Soul Connected?


Random Personal Thoughts within True Spirituality is Love Being You

Just because someone is, a founder of Jesuit Order in one incarnation does not mean they are that now. Each incarnation is a separate experience even though share the same soul connection. In my other incarnations, I was into Rosicrucianism and the other lifetime was strongly into Christianity. Sharing as an example of the variety of lives that one soul can have, it is numberless. In this lifetime, I am a spiritual person that follows no religion in a church or a mystery school in a temple but enjoy the journey of learning about all those religious beliefs.

For instance, a person could be a Satanist loving Satan and  another incarnation is a priest in a Christian church loving Christ. That soul has knowledge of both beliefs. I see religion as a classroom within a temporary venture. No spiritual belief while in the human journey is right or wrong. For the reason that a person can learn just as much by following Satanism or Christianity, Atheism and Freemasonry it contains lessons learned within each belief contained. Believing in no God or in a God it all creates self-growth. The belief that believes in something or nothing within a belief is beautiful to believe in love everyone and their respected beliefs.

Photo Sources for this Blog Post:
- Michael Tsarion Photo / MichaelTsarion.com
- Ignatius of Loyola Photo is Public Domain
Note: Then I Collaged or Blended Photos to Create this One Blog Post Image.