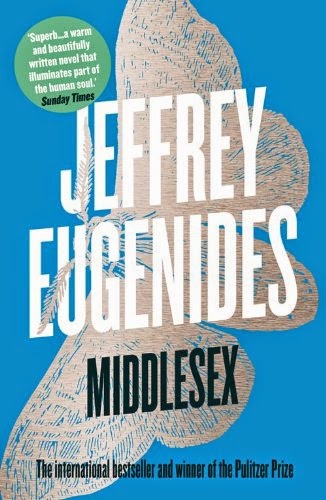 Middlesex is not only the name of the house in which the family in this book come to live, but it is also the central storyline around which this book centres. Cal (or Calliope) Stephanides is a intersex person, "a middlesex" who neither fits in one gender identity or the other. This is the story of his (because finally he is diagnosed as such) family - how his genes were created and incubated down the generations through an inter-marrying Greek family.

Through the sympathetic eyes of Cal we start with his grandma and grandfather, brother and sister who fall in love with each other whilst living in a tiny Greek village. The issue of incest is not treated with disgust or contempt - merely as a love story that faces hardships of guilt and shame. Cal is not bitter and blames no one for his condition. He is merely there to tell a story - his own Greek mythological tale.
After war envelops the region the couple flee to America where their lineage continues - taking the family to Detroit, where Cal is born. Cal is raised as a girl, Calliope, because his condition is unknown. However it's when puberty hits that people begin to worry. Despite acting like a girl Calliope isn't developing as she should. Plus her sexual preferences are for women.
The novel deals with issues of gender identity. Is Cal male or female? Is nature more important or nurture? Can you choose your sex or are you born with it?
This is a very interesting richly woven story which charming likeable characters told through a gentle narrative voice. I enjoyed it very much. In fact, it lured me away from box sets back into the world of novels. For this I award it 8/10.
We use cookies to improve user experience, remember your preferences, and analyze website traffic. By continuing to browse this website, you consent to our use of cookies as outlined in our Privacy Policy.