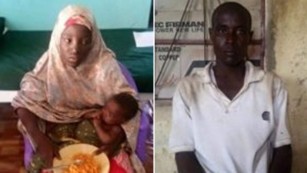 When Amina Ali Nkeki was kidnapped by the Nigerian terrorist group Boko Haram more than two years ago, she was a mere schoolgirl.
On Tuesday night, she apparently wandered out of a forest, asking for help, accompanied by a baby and a man who claimed to be her husband, according to witnesses.

The man is being investigated by Nigeria's joint intelligence center, according to a military statement.
Amina Ali is the first of the more than 200 Chibok schoolgirls kidnapped by Boko Haram to be freed after the two years in captivity, Nigerian military officials say.

Military officials and locals gave different accounts of how she was liberated. Nigeria's army said she was rescued by army troops, but a witness told CNN the girl wandered out of the Sambisa Forest in the northeast of the country along with her child and a man.
The Sambisa Forest, believed to be the terrorist group's stronghold, has long been the suspected location of the girls. As many as 276 of them were kidnapped at gunpoint from their boarding school in Chibok in Borno, northeast Nigeria, on April 14, 2014.

At least 57 girls were able to escape soon after their abduction, but more than 200 of them remain missing.

Breaking news, click here
Please join me as I am praying for the safe return of all the rest of the girls home. May our Father protect them and may He change the hearts of their kidnappers in the beautiful name of Jesus-Christ our Saviour. Amen
We use cookies to improve user experience, remember your preferences, and analyze website traffic. By continuing to browse this website, you consent to our use of cookies as outlined in our Privacy Policy.