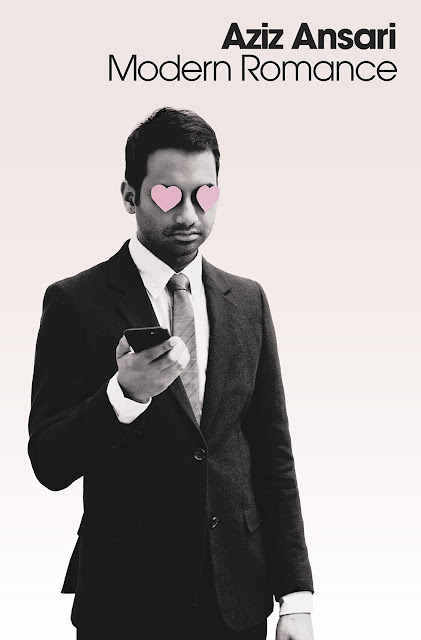 I picked up this little beauty at the most surprisingly boring airport on the planet: New York's Newark. Can I stop for a little rant here about how terrible American airports are? LAX is boring as hell too. For two major cities with exciting vibrant cultures in a country that leads the world in terms of consumerism it seems inexplicable that theses airports have hardly any shops or places to eat. I mean, it's like suddenly stepping into communism. One place to have a drink, one place to buy a magazine. My flight home from Newark was delayed an hour and since we were very early anyway I needed to find something to do. Hence why I spent a good half an hour browsing the tiny bookshelf in the convenience store.

Modern Romance is a humorous study of modern relationships and how they are affected by new technology such as mobile phones, social media and dating apps. Aziz Ansari had me nodding along in relief that I wasn't the only neurotic modern dater who checked my phone a million times a day to see if someone I like has text me back. He describes the pain we all feel when we can see the dots of someone writing a message only to have no message arrive. Reading this book was an exercise in realisation for me. The struggles of my dating life are the struggles that are happening all over America. Dating apps have made finding someone new and exciting as easy as tapping a button so why settle for the person in front of you? Meanwhile texting and social media means you don't have to break up with someone in person. Ansari also looks at dating habits in France, Argentina,  Dubai and Japan. The conclusion is that no-one has it easy. In fact, dating in Britain provides a vastly more hopeful prospect than dating in Japan. In Japan the situation is so bad that the government has had to step in to encourage people to date. The problem it seems is that men are becoming "herbivore" - too emasculated by the economic downturn and fear of failure to ask women out and too traditional to view a woman who does the chasing in a positive light.

All in all modern technology, this book argues had a positive effect on finding romance. We now have more choice than ever and therefore have the luxury of looking for a better match. However the downside is the process of finding someone to settle down with has turned into a mammoth quest for perfection - and made us more dissatisfied with non-perfect partners.

Ansari puts a positive spin on this conclusion. He is, after all, loved up in a good relationship now. His book provides an amusing male perspective on dating from an educated and thoughtful guy. But I wonder if the conclusion would have been so positive coming from a woman's point of view. It seems that when Ansari actually decided he was ready to settle down it was very easy to find a woman with that aim in common. In my experience this is the case for a lot of men I know. Suddenly they think, "yeh now's the time" and the next girl they date becomes the "one". This is because women, in general, are happier to have serious relationships. So if the man is ready it seems to work out. For women who decide they'd like to settle down the opposite is true. As soon as a man senses you'd like things to get serious they tend to run away screaming.

Can we take a little moment to think about the negativity of language involved in long term relationships:

"Serious relationship" - sound no fun at all!
"Commitment" - sounds like a legal contract again, no fun at all.
"Settle down" - implies settling for something imperfect.

Even language is against this stuff! Anyway this is my rant and not Ansari's so let's get back to him.

Ansari's book was a great read, very light hearted, very funny and I learnt that THE STRUGGLE IS REAL PEOPLE. So yeh I give this book 10/10. Congrats funny man.