The Most Important Human Being on Planet Earth, and Quite Possibly the next Biracial President

blogcatalog
Quoting straight from the international news source of record,   Yahoo News/US Magazine:
"  Not yet 2 years old, North West is indisputably the most important human being on planet Earth. But keeping up with the woman who will one day be elected President of the World can be difficult. Welcome to the North News Roundup, in which we school you on everything North West."
"Today's lead story in the North News Roundup: Kanye West, a human man appointed to care for North until she is grown and can assume her role as Messiah, has released a music video for his song "Only One." North, who the song is about, is also featured in the music video directed by Spike Jonze because of course the Kardashian-West clan would have to have an Academy Award winner direct their home movies. You can watch the whole video on Kanye's website.  "

"  Elsewhere in the North-iverse, do not text Kanye to tell him how cute his new music video is. He will not get it. That is because North, who inherited her mother's propensity for holding a cell phone and her father's mischievous side, flushed Kanye's phone down the toilet. "
"Not last night, but the night before, I hear North in the bathroom and I hear the toilet flushing and flushing," Kim Kardashian told Ryan Seacrest during an appearance on his radio show. "And I run in there and I’m like, 'Wait a minute, babe,' to Kanye. 'Didn't she have your phone a second ago?' The phone was in the toilet! I put it in a bag of rice, [but] nothing worked."

" It's a nice window into what North will be like as our overlord; her punishments are tough, but fair.
Fortunately, Kanye was probably all ¯_(?)_/¯ about the whole thing anyway because North has made him mellow as hell. Or that's what he said on the Ellen DeGeneres Show. Marriage and fatherhood have made him a "better human being," he told Ellen. "I've definitely learned how to compromise more, which is something you have to understand when you partner with people in business. And I've learned how to shut up more. Yeah, I think I'm a better human being because of [Kim] and because of my daughter. "

(That's Yahoo/US Magazine, just so you know, we didn't write anything above this sentence.  The Fashion Babies are merely reporting THE FACTS--as written by adults!)

The link to this actual story is: https://www.usmagazine.com/celebrity-news/news/north-west-news-roundup-toilet-training-terrible-twos-music-videos-2015301#ixzz3QdaOrwuN 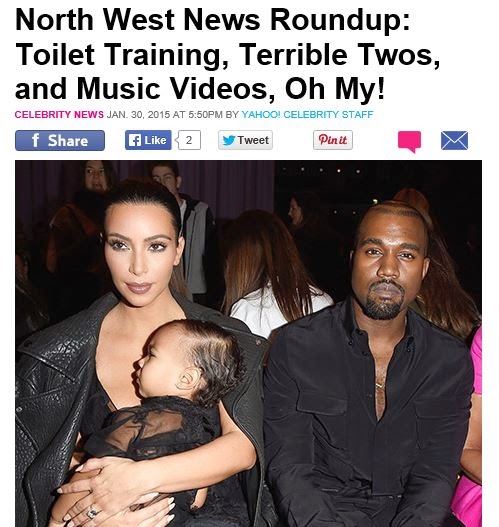