blogcatalog
When you have a baby it's easy to get overwhelmed by all the things you think they’ll need. If you're like me you probably went out and bought all the things, because books, nurses, family and strangers told you they were all necessary. After a few months though you soon realise just what you did need and what you could of lived without. Then your baby gets older and there's a whole new round of products to buy and the process starts all over again. There's a lot of gimmicky products out there, but when it comes to necessities dinnerware is pretty high up there. Your child will need plates, cups and cutlery pretty much from the time they start solids onward and you’re guaranteed to go through a heap of them so its worth investing in a good quality set from the start.
We’ve used a heap of different sets over the last two and a half years since bub started solids and I quickly learnt the cheap $2 plates and cups don’t last very long {and cheap no-leak drink bottles are not leak proof at all, but that’s a whole other story}. Another thing I've learnt is that bub loves matching sets, i.e. the cup and plate look the same, whether they're covered in Peppa Pig or everything is all blue, she {like her mum} loves it when things match. It's entirely possible I've passed on my ocd in small doses.
I recently found JJ Rabbit Australia on facebook and was drawn to both their eco-consciousness and cool matching designs. JJ Rabbit Australia is an environmentally responsible children’s feeding brand with a range of BpA, Phalates and PVC free animal inspired feeding essentials. The JJ Rabbit range includes CUPPIES, ergoFORK+SPOON, aniBOWL, dipPLATES, dryBIB and siliMATs in bright colourful animal designs. They're cute, biodegradable, funky, functional and come in matching sets, so pretty much every toddler {and ocd mum's} dream dinnerware. We introduced some of the rabbit designs into our house a few weeks ago in an effort to make meal times more fun and exciting for bub {and I was secretly hoping it just might help with her fussy eating if I was lucky}. 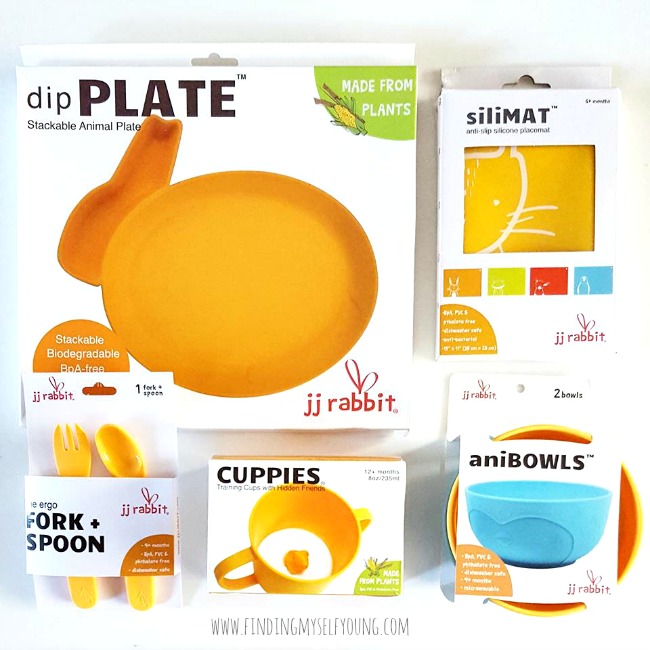 Ironically they didn't even make it to dinner time before we used them the first day, instead we had an impromptu picnic outside with bub's dolls and fake food. If you're ever planning a fake picnic with your kids it's probably best not to use a white blanket, or at least don't give them real drink in their cup, because it's highly likely at some point it'll get knocked over and spill all over the blanket. Rookie error, won't do that again. The picnic was a good way to get her excited to use the set for dinner to eat real food later though. 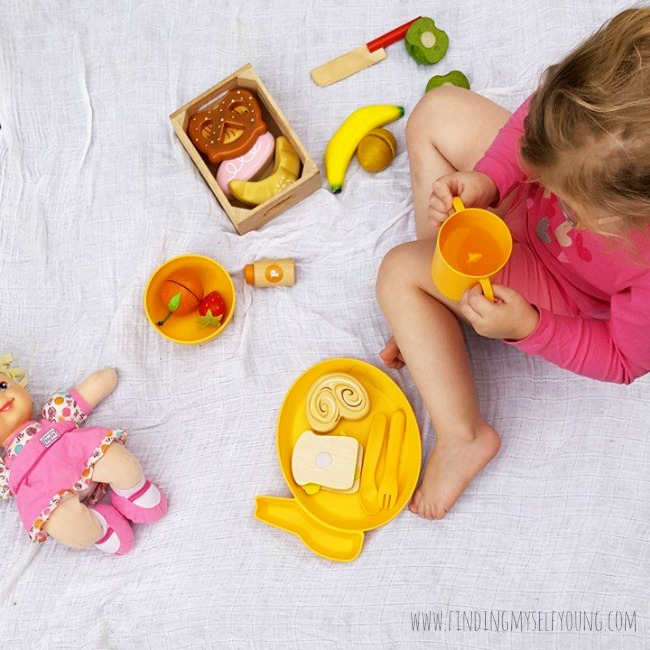 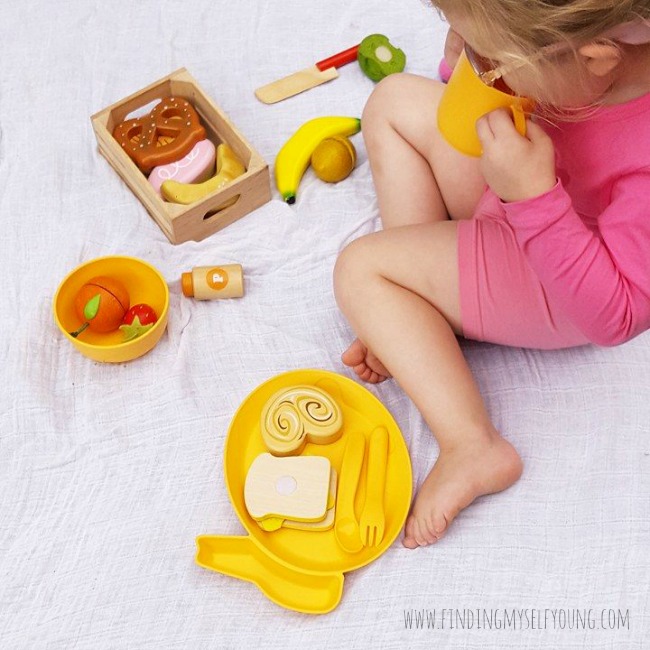 Without a doubt both mine and bub's favourite piece from the JJ Rabbit Australia range is the cuppie. These cups are unlike anything that I've seen before and are one of the coolest toddler cup designs ever. We have the orange rabbit cup which has a little rabbit sitting inside the cup so as bub drinks he appears. How cool is that? I'm also a big fan of the two handles. Bub's been drinking from big girl cups for a while now, but she still uses a straw, because when she tries to drink from the cup itself she inevitably ends up with half her drink down her shirt. The cuppie has been great because holding the handles she can drink without spilling anything. It's quickly become her favourite cup and we've had a pretty major breakthrough with it, bub's finally started drinking milk from a cup. That may not seem like a huge milestone to most parents, but considering she had a pretty severe dairy allergy from birth {which she grew out of last December} it's been a long road convincing her to drink milk when she used to associate it with causing her pain. We've tried milk in other cups for the last few months but she simply refuses to drink it, but finally she'll drink it out of the cuppie. 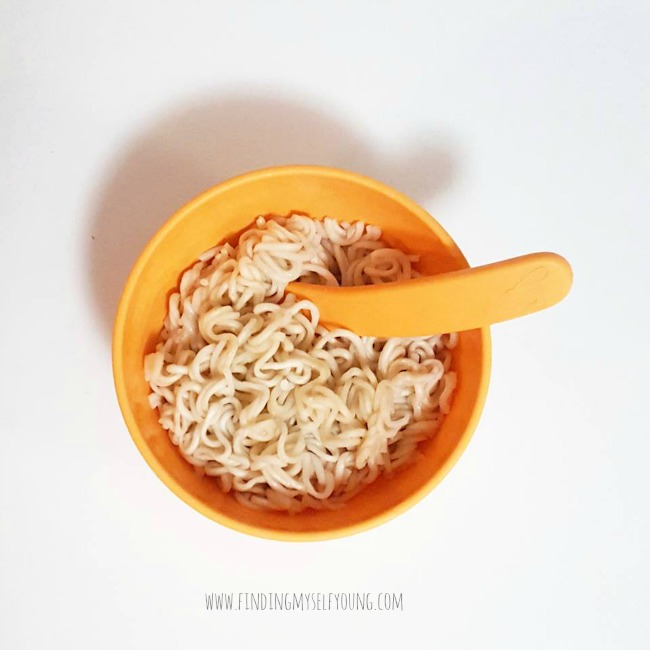 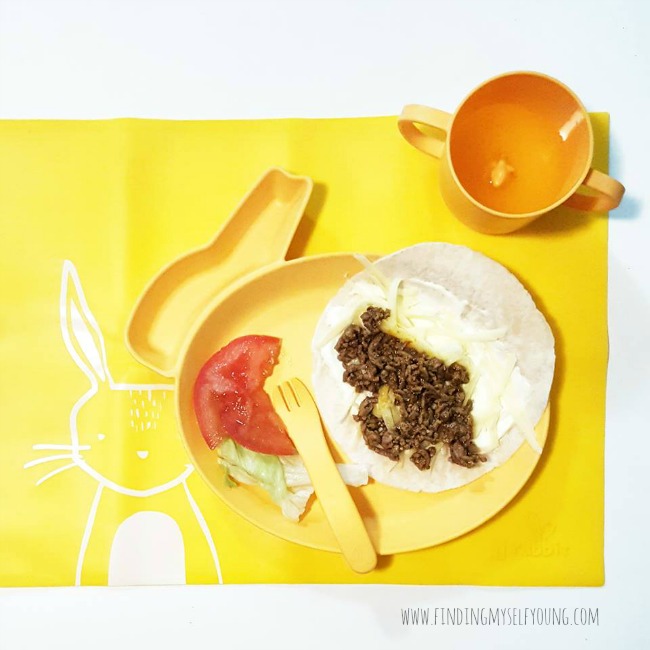 The other pieces are innovative in design as well, for example the dipPLATES, which come in various different animal designs, are all stackable and are divided into two sections to easily separate condiments from food. The siliMATs can be used as either a non-slip placemat or as an actual eating surface as they're anti-bacterial. I've used ours as a placemat and rolled it up into the nappy bag to use when we eat out so her food doesn't end up touching the sometimes questionable food court tables. The JJ Rabbit products are designed in Austin, Texas and are distributed in Australia by JJ Rabbit Australia. Local stockists can be found here.
While I was hoping the dinner set may have brought about some miraculous changes to her fussy eating habits, unfortunately it hasn't {that tomato and lettuce on her taco plate are never eaten, but I keep persisting}. To be honest I pretty much knew that was wishful thinking, there was no way I'd change 2yrs of fussy eating in a couple of weeks, but I'll keep trying. We did have a pretty huge breakthrough with the cuppie though and it's quickly become her favourite dinner set so I definitely think the JJ Rabbit products are a worthy investment and they certainly make meal times fun.
Are your kids fussy eaters too?
Toni x
Disclosure - I was provided with the JJ Rabbit products shown for the purpose of review. All opinions expressed are based on our experience with the products. I did not receive payment for this review.
Linking with Kylie
We use cookies to improve user experience, remember your preferences, and analyze website traffic. By continuing to browse this website, you consent to our use of cookies as outlined in our Privacy Policy.