My Lady's Putt - An Antique Infographic Evokes Publishing's Past 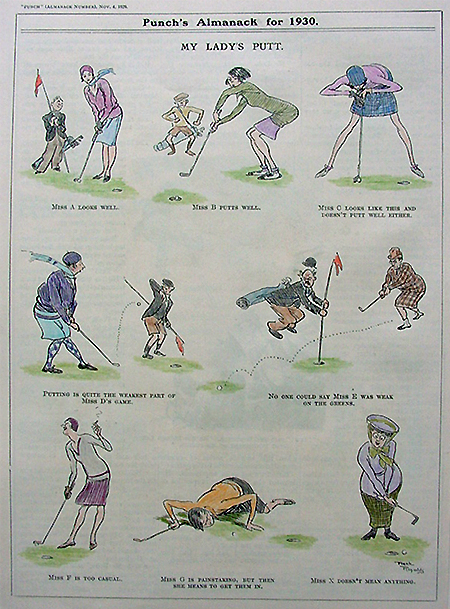 While The Babe may not have approved, I'm quite sure "My Lady's Putt", the humorous illustration at left, provoked ample amusement in 1930, when it was published in Punch magazine's yearly Almanac.

After all, Punch was the era's go-to source for sophisticated satirical humor, and competitive golf for women was still in its infancy.

The illustration is comprised of a series of whimsical golf drawings by Frank Reynolds - a British artist who often focused on golf - and each sketch features an individual woman and her own... um... unique putting style.

One woman holds a cigarette in one hand while casually putting with the other, another more determined lady, reads her putts on the ground, spidermanwoman style.  Golf fashions of the day are illustrated along with the idiosyncratic putting strokes.

One can easily imagine the laughter, as upper class men passed the popular magazine around in the cloistered drawing rooms of London's venerable gentlemen's clubs.
Though many of those men probably recognized their own putting style somewhere in the illustration, that wouldn't have been discussed in those staid, segregated bastions.

My Lady's Putt... or a modern version of it... would be unlikely to be published anywhere today. Women's golf has become so widely played - on such a high professional level - that the drawing wouldn't have much of a point... and would certainly be considered offensive by many.

In addition, with the demise of print media, humorous illustration is now something of a dying art.  Like narrative journalism and sports cartooning, it doesn't translate well to the backlit screens where new media resides, in addition, the short deadlines and declining budgets that digital publishers work with make the detailed illustrations of the past an impossibility.  That, I'm afraid will be a great loss for future generations as a uniquely evocative kind of visual story telling disappears.