Need to Lower Your Grocery Bill? Bring Some Old-Fashioned Frugality Into Your Kitchen 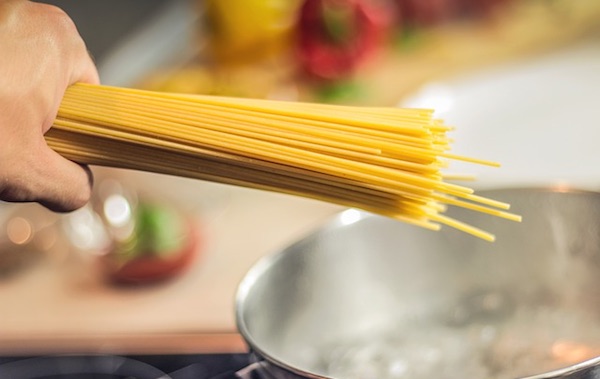 Does it feel like your grocery bill keeps growing? Sorry, but you can’t blame it on inflation. Food-at-home prices dropped 1.6 percent since last July — the sharpest decline since 2010. Maybe you’re eating healthier or haven’t been as diligent about shopping sales ads and using digital coupons, rewards cards, or rebate apps. Or maybe, like me, too many convenience foods are creeping into your kitchen.

Convenient prepared foods – even their healthy versions – are so… convenient. It’s nice to have pre-cut, pre-mixed, prepared foods for the times our schedules get a little hectic, but they can quickly become an excuse to get lazy about food preparation — and jack up the grocery bill.

Back in the ‘olden’ days, folks didn’t have the option of prepared breads, sauces, dressings, or meals-in-a-box. They used basic staples to make everything they needed. I’m certainly glad I have the option of buying marinara sauce instead of having to make it every time I want some pasta, but I think it’s time to bring some old-fashioned frugality back into our kitchens. Here’s how we can do it.

This one annoys me because I’ve been guilty of it. For years, I bought baby-cut carrots because, well, who wants to peel and cut a bag of whole carrots when you can buy them ready-made? I finally stopped to realize the price difference between the two – roughly 50 to 60 cents per pound. Ouch! I also realized it only takes about five minutes to peel and chop a bag of carrots.

Now the only time I succumb is when the cut versions are marked down – a lot. Reduced-price chopped veggies might be past their prime for snacking, but they’re great for throwing in stir fry.

Learn How to Make Things from Scratch

The term “from scratch” is scary to some people because it evokes images of slaving over the stove. In reality, there are dozens of items we use on a regular basis that don’t take much time – or skill – to make from scratch. Not only will this help you stay within your grocery budget, but you’ll enjoy fresher, less preservative-packed foods. Take a look in your fridge and pantry and write down staples you use on a regular basis. Can you learn how to make some of these just from watching a few YouTube videos? Here are some suggestions:

Produce is at its best and cheapest in the summer and fall, but then January rolls around. The word “preserve” elicits visions of canning and pickling, but the modern alternative is simple – prepare and freeze. You might be surprised at some of the things you can freeze. Most vegetables and fruits keep well frozen, and you can also freeze trays of fresh herbs in olive oil, broth, and egg whites or yolks.

Don’t have time for a garden? No problem. Scallions, celery cores and herbs can all be grown and re-grown right in your windowsill.

Save money on meat by buying tougher, cheaper cuts and slow-roasting them in broth, herbs, and spices for a few hours. Plus, if you start the roast early, you won’t have to wait for dinner (they were on to something when they invented the technique).

Just because we have so many convenient, prepared foods at our fingertips doesn’t mean we have to use them. Bringing back a few old-fashioned practices into your kitchen will shave your grocery bill and revitalize your enjoyment of fresh, home-made ingredients. What are some things you save money on by doing the ‘old-fashioned’ way?