No God in Downton! 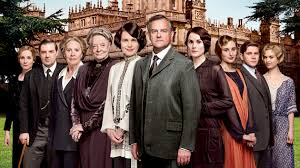 Not because its a fantastic sereie but I like it because its pretty slow, not so much violence and sex. I love some of the acting, some actors are fantastic.

Its very popular here in Sweden and in USA and of cause in the UK.

I'm not following it episode after episode but if i have a chance I Watch.

The producers of the series has been doing Everything they can to make it as real as possible, but:

I read a article the other day having the head line "No God in Downton"!

I have watched the episodes when they celebrate Christmas in Downton and yes its not very Jesus centred, but in the article it also said that there are no table prayers etc at all in the series.

During the time of Downton, Before every meal a table prayer should be prayed.

Something the producers didn't want in the serie'

Napkins would also been fold in the likeness of a Bishops mitra, something the producers didn't want to have.

The producers were also very afraid when they started the series for its name "Abbey", which could upset some people thinking it was a religious series.

The producers were and are hysterical terrified of religion, or should I say Christianity especially. Sad to say its not only them and in this series. The western World embrace other thoughts, ideas and religions but try Everything they can to reject Christianity...