Not so positive review of Eat, Pray Love

I came across this interesting review of Gilbert's book. It's a different take on the many reviews that have been done so far. It draws into question the author's honesty, in relation to her writing of the book and what she had to do to make it entertaining. In fact, Ms Mertz found it embarrassing. 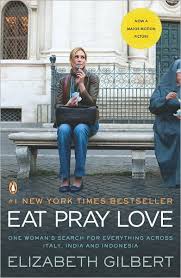 Traveling for the Book – How Far Must a Writer Go?
A Review of Elizabeth Gilbert’s
EAT, PRAY, LOVE

by Carol Mertz
As is often the case, travel contributes to the making of a book.

Elizabeth Gilbert created Eat, Pray, Love following a lengthy respite from her normal activities as a writer. She traveled to Italy, India and Indonesia and conveniently used the three “I” countries as sub-divisions within her book.

I found this memoir, though it presents more like a novel, outright embarrassing, so much do we learn about aspects of Gilbert’s private life we’d rather not know. Because of her humor and her ability to write with clarity and with what many regard as honesty, she nearly won my respect. In the first part, particularly hilarious, she is nearly undone by Italy’s pasta offerings and within weeks gains about twenty-five pounds. Was this true, or did she as an author, know how to play up her food indulgences for the sake of her book’s structure? This very overindulgence is what draws her so-called honesty into question.

One senses Gilbert worked intensely with her editor, and together they knew just how far she had to go to make the book entertaining. Her subsequent movie deal and the popularity of her book prove she was successful, by today’s cultural standards. (Eat, Pray, Love was released by Columbia Pictures four years after the book’s publication in 2006.) My slanted eye notwithstanding, her writing, to me, is suspect. She’s willing to go to any lengths. Since she portrays herself as one who knows no boundaries in her writing life or in her private life, she appears willing to risk all for the sake of the sale. This ultimately makes her writing contrived and perhaps unworthy, in my judgment.

If we take Gilbert’s self-portrayal at face value, we see a woman with enough financial resources to travel far and long enough to sort through the devastations of her failed marriage and to select a new path, in this case, an initially salacious arrangement with a Brazilian. The relationship may or may not prove to be one of ultimate loyalty.

Many women, I imagine, are shocked by, or envious of, her ability to travel alone. This freedom is not an essential “plot” element of the memoir, but underlies it. It’s easy to assume most women in the throes of divorce would not be emotionally free enough to take off on a trip, or physically free enough to travel with no foreseeable deadline and no urgent financial or familial obligations. Those of us who bear real family allegiances might be justifiably envious.

Gilbert portrays little guilt about her failed marriage and yearns only for freedom and escape from her suffering. Early on, she tells us she has no religious guide in her life except the zen teacher to whom she is introduced in NYC.

The author contrasts each three segments of her book vividly and artfully. Throughout she exercises no restraint in any of the countries she visits and portrays herself as entirely free to follow her inclinations into any pursuit. I find her attempts at meditation in the ashram not entirely plausible, depicted as passionate strivings toward an elusive something. In my view, Eastern meditation practices value detachment over striving.

Gilbert gains twenty-four pounds during her first few weeks in Rome. In India (Pray, part two of the book) she scrubs floors and supposedly does learn how to meditate, with the help of her guru.

In part three she finds her man. And vah-voom! How she and her man click! Again I ask, contrivance?

If Gilbert truly fund-raised among her U.S. friends to provide housing for a poor woman she meets in Indonesia, and if, as is hinted, she used funds from the sale of her book to help this woman, perhaps we can forgive her her exaggerations.