This is purely anecdotal: I have no idea why it happened or whether it will work for your dog, but I thought it was worth sharing.

My Yorkie has fleas, and we're having trouble getting rid of them. Though I did eventually give in and spray the furniture and carpets (after two rounds of laundering and vacuuming on the same day as a flea bath didn't work), I haven't sprayed the dog or put the medication on his back. He's less than five pounds and pretty sensitive, and I'm considering chemicals a last resort. 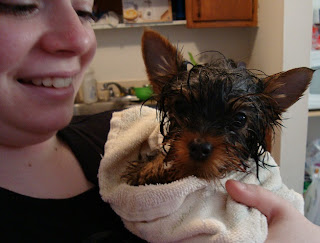 In the meantime, he's itchy. Since bathing him in oatmeal shampoo seemed to give him some relief but didn't last, my daughter decided to try rubbing him down with actual oatmeal and letting it sit on him for a while. The oatmeal did relieve his itching quite a bit and he settled down to sleep afterward with very little scratching. But that's not the bit I wanted to share.

The oatmeal seems to have killed a lot of fleas--more than the medicated flea baths have. Not only did a much larger number of fleas wash off the dog when she rinsed off the oatmeal than we'd seen in the flea baths, but we found far fewer on him later that evening AND (for the first time in this process) he dropped a few dead fleas around the floor and couch.

While I'm not super-excited to be finding dead fleas on my furniture, I'm very happy to see them spontaneously dropping dead...like I thought they were supposed to after the medicated bath, but never seemed to.

Like I said, I have no idea whether there's a scientific basis for this or whether anyone else would see the same results. But oatmeal is cheap and harmless, so if you're fighting fleas it couldn't hurt to try. Tori used regular Quaker Oats, prepared according to package instructions except, of course, NO SALT. It took about a cup and a half, prepared, to cover our five-pound dog.