Oklahoma Earthquake - or - THEY Awakened the Sleeping Spawn of CTHULHU!!!

Considering the crazy things folks have been known to take seriously, I'd better make a disclaimer: Cthulu is fiction. Make-believe. Not real. Moreover, I don't really believe that Old Ones imprisoned the star-spawn of Cthulhu deep under our feet. Mainly because 'all of the above' are not real. Neither is what I suggest in this post, for the most part.

After writing about the big Oklahoma earthquake in another blog, I realized that part of the post belonged here.

Now, let's see how the desire to blame someone (preferably someone using newfangled technology) the unknown, and a little craziness might make the Oklahoma earthquake even more interesting than it really is.


'Inspired by Real Events' - Awakening Horrors from the Deeps of Time 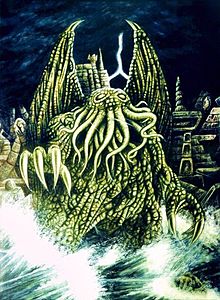 Ignoring warnings by the Last Seminole Shaman and the Earth First! Society, heartless Big Oil carelessly used hydraulic fracturing, or fracking, to release - as they thought - natural gas from the rocks below Oklahoma. (Drama aside, this is true: fracking has been used to extract natural gas in the Oklahoma area.)

But in their Greed and Perverse Ravaging of Fair Mother Nature - whoops, that's more a Captain Planet thing - these unwitting mortals have awakened an Ancient Evil!!! Even now, "unexplained" tremors abound as forgotten horrors from the depths of time burrow inexorably upward, seeking to destroy those who released them, and re-establish - - - well, you get the idea.