On Making Peace With Social Media and Navigating Life Online 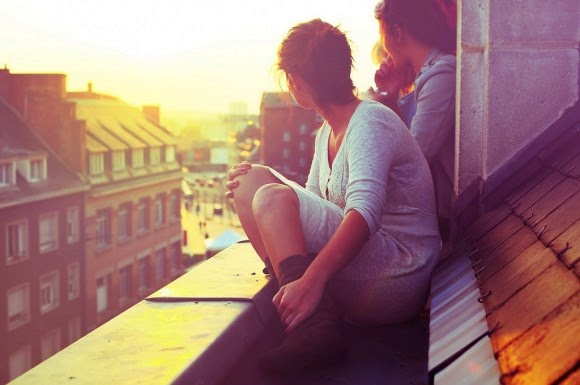 This post was first published on The Huffington Post
Blue-tacked on my bedroom wall are magazine snippets and colour-pop posters, in the midst of which sits a tiny block of text two inches tall, hacked from a Sunday supplement during my college days. It used to disappear from time to time, only to resurface in-between diary pages or stuffed in a scrapbook; until I decided its message was too important to languish in my desk drawer:

"I'm finding it more and more difficult to figure out what's beautiful and unique about the world when I'm sitting in a room full of people looking at their phones and updating what they're doing right that instant. Am I interesting enough? How do I compete? How do I prove to people that I am subversive and unique and as cool as others? Am I taking this picture because I want it for myself or because I want other people to see it? I want them to know what I'm doing, and that I am funny and interesting and doing cool stuff all the time. HELP, PLEASE TELL ME I'M INTERESTING! VALIDATE ME!"
Social media. A subject to be reviewed, I concluded - at a later date. As an 18 year old, I was cloistered away in the rural countryside, making dodgily constructed dresses for A-level Textiles. Meanwhile, like a pimply youth with growing pains, social media was going through an awkward adolescence - more college campus than revolutionary digital trend. Fast-forward to 2015 and social media has Jack-and-the-Beanstalked, affecting the way we work, shop and socialise. According to a report by GlobalWebIndex, the average user spends 2 hours, 25 minutes on social media each day, whilst the Pew Research Center has found that 52% of online adults now use two or more social media sites. During my education, networking services such as Instagram hadn't even been released. Now, roughly half of young adults ages 18-29 (53%) feed into the photo-sharing behemoth - 49% of them daily users.
"We became social through a constant slew of commenting, posting, liking - our lives soundtracked by the beep or buzz of our devices"
As my own life became besieged by the networking-powers-that-be, that hastily-torn scrap of paper gained newfound significance. Squeezed for time to meet up in person, I framed social media for my social transgressions. Texts and facebook messages stacked up like dirty dishes in my inbox. Notifications ran like tickertape on my timelines. And it wasn't just me that was feeling the strain. My colleague reported to me that her not-even-teenage Year 7 son was likely to switch secondary schools because of cyber-bullying. A new study by researcher Mai-Ly Steers entitled "Seeing Everyone Else's Highlight Reels: How Facebook Usage is Linked to Depressive Symptoms" observed that "the act of socially comparing oneself to others is related to long-term destructive emotions". And then there are digital detox weekends where you can go and learn how to live without your phone.
In the beginning, social media enjoyed a golden honeymoon. The ability to make contact in quicker, easier ways eradicated the need for phone calls. We became social through a constant slew of commenting, posting, liking - our lives soundtracked by the beep or buzz of our devices. Technology made it easier to leapfrog social responsibilities, because everyone else was doing the same. This inevitably bled the effort out of communication, and our ability to physically socialise suffered. We became virtually omnipresent, looming like holograms - but somehow, we weren't really there at all.
There were other things that bothered me too. I felt burdened knowing really personal stuff about people that ordinarily, I'd pass by in the street. I had been taken in, hook, line, and sinker by the illusion of being connected, just because I'd scrolled through people's digital updates. The increasingly blurred boundaries between the virtual realm and real life made it difficult to separate the identities presented on carefully curated timelines before me, let alone my own. And I was numbed to the immediacy of life - chattering voices, cherry blossom unfurling, puffy clouds and towering spires, as I looked down at the screen in front of my face. I was scared that the love of my life might waltz past one day, as Gary Turk forecasted, and I wouldn't even notice.
"It's no use sharing information and content, if we aren't sharing laughs, stories and crude jokes in person - because ultimately, human beings need company"
We would do well to remember that it isn't social media that's made us unsocial. We simply over-indulged, lured away from living in the moment as we hungrily traversed the web. The platforms themselves enable us to make connections, bridge time-zones and soar across oceans - by nature their vast reach makes them ideal for proliferating dialogue, highlighting injustices and uniting people through common causes. But these connections, borne from a place of positivity, need reinforcement in the form of one-to-one contact if they are to truly become something meaningful. It's no use sharing information and content, if we aren't sharing laughs, stories and crude jokes in person - because ultimately, human beings need company. Pixellated emoticons can't replace a vice-like hug, nor does a 'like' constitute companionship. We expect technology to step up for human interaction in ways it can never achieve.
So what's to be done? We've got to find our own formula - one that encourages balance. I've deactivated Facebook; a move greeted at first by friends with discombobulated looks, swiftly followed by amusement. My willingness to opt-out of the loop, they said, would cut me adrift from the tide of communications. Relinquishing my log-in, it was inferred, would send me spiralling down the plughole.
It was quite simple, I argued.
"If I want to speak to someone, I'll ring them!"
Or arrive on their doorstep for dinner and conversation. They've been warned.
We use cookies to improve user experience, remember your preferences, and analyze website traffic. By continuing to browse this website, you consent to our use of cookies as outlined in our Privacy Policy.