One Habit to Save Up to 21% of Your Electricity Bill

I was so excited to see the electricity bill in the mailbox the other day. I promptly reached for it as if someone would sneak up from behind and snatch it away from me. You might be thinking it must either be the heat in Singapore that was getting into me or that I was going crazy; who in the world would be excited to get an electricity bill in the mailbox. On the contrary, it was neither the heat nor that I was going crazy. I was conducting an experiment and this was the second months of the experiment. Even before I could get into the elevator, I was already anxiously opening up the bill.

On the first look, everything seem normal. However, when I turned the bill over to look at the other side, I was all excited again. A scanned copy of part of the electricity bill said it all. Referring to the bar graphs below, I had saved another 25 Kilowatts or approximately 27.5 pounds of coal (amount of coal needed to generate 25 Kilowatts of electricity) from February to April. According to Wikipedia, the USA consumes about 1.053 billion tonnes of coal each year, using 90% of it for generation of electricity. The world in total produced 6.19 billion tonnes of coal in 2006. 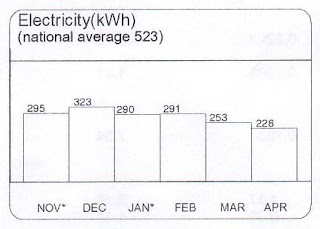 You may be saying, "What is the big deal? It is only 63 Kilowatts." A baby step to a healthier planet. According to the Department of Statistic of Singapore, there were a total of 923,300 resident households in Singapore in 2000. Imagine if every household can save the same amount of electricity (and even better if they can save more) every month, we can save up to 23 million Kilowatts of electricity every month (hope I gotten the Math correct). That would not look like a small deal anymore right? 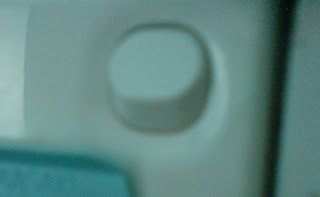 Lets take a look at how can we achieve that baby step toward a healthier planet. It takes less than 5 minutes to do it - that is to turn off any unused appliances at the socket and not just to put it in a standby mode. Yes, saving electricity can be that simple and straightforward. The first time I read an article about this, I was very doubtful and thus I decided to experiment it in my home. I was amazed of the result too.

Putting unused appliances to standby mode still uses lots of energy. We can save this energy by turning off televisions and other items when they're not in use. That includes your computer's monitor as well. Screen savers only stop the screen from getting burned in images. Energy saving mode cuts power usage but nowhere near as much as the on/off switch does.

Some of you may be saying, "It'll be so inconvenient to turn off the switch; keeping any unused appliances in the standby mode mean I can switch it on immediately using the remote. I don't have to move 'half way across planet home' to turn the switch on. I had the same thinking initially too. However, it was not a challenge for me to change. By moving around the house to turn the switch on, I become more active and I treat it as an exercise. And the ultimate motivation comes from doing my bit for planet Earth, as well as saving my electricity bill up to 20% every month.

Just that one baby step, it can create a big different. Lets us all do our bit for our planet Earth. Wishing you goodness in all areas of your life.