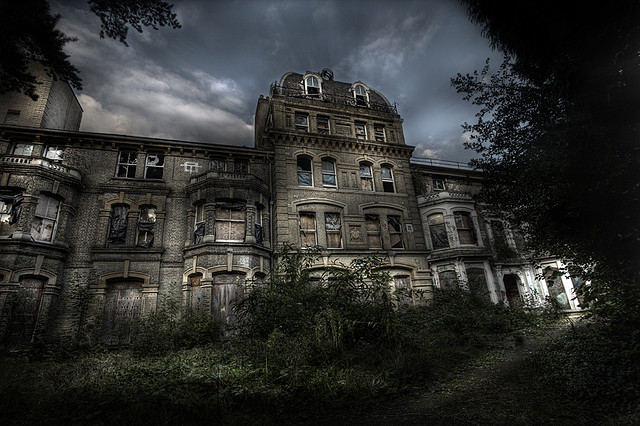 Doctor Jones called me into his office this morning.  I saw immediately that he was looking a bit down in the mouth, so asked him what the matter was.

"We're losing money, Fred," he replied.  "At this rate we'll have to close the asylum in six months.  We have to find some way of reducing the number of non fee-paying patients so that we can fill their beds with wealthy Hollywood celebrities."

I scratched my chin - I always do this when I think - and then I had the inspired idea to paint a fake door in the ward and monitor patient behaviour towards it.  Doctor Jones wasn't as enthusiastic about the idea as I was, but allowed me to spend the night exercising my dormant artistic skills.

The following morning the ward was all abuzz, with patients frequently approaching the new door and trying to open it - despite the fact that though my beautiful door had looked very realistic in the dark, it now resembled something my four year old might have done.  However, we noticed that our oldest patient, Andy, had ignored the door, and instead sat quietly in the corner, observing the many failed attempts with a smirk on his face.

Excited, I turned to Doctor Jones and said, "Look. Andy hasn't been fooled at all.  Maybe he's our first candidate?" He agreed, and we decided to interview him later that day.

"I noticed you were smiling at the others who tried to open it."

"Why do you say that, Andy?" asked Doctor Jones.

He leaned forward, looked around furtively, and then whispered.  "I have the key."